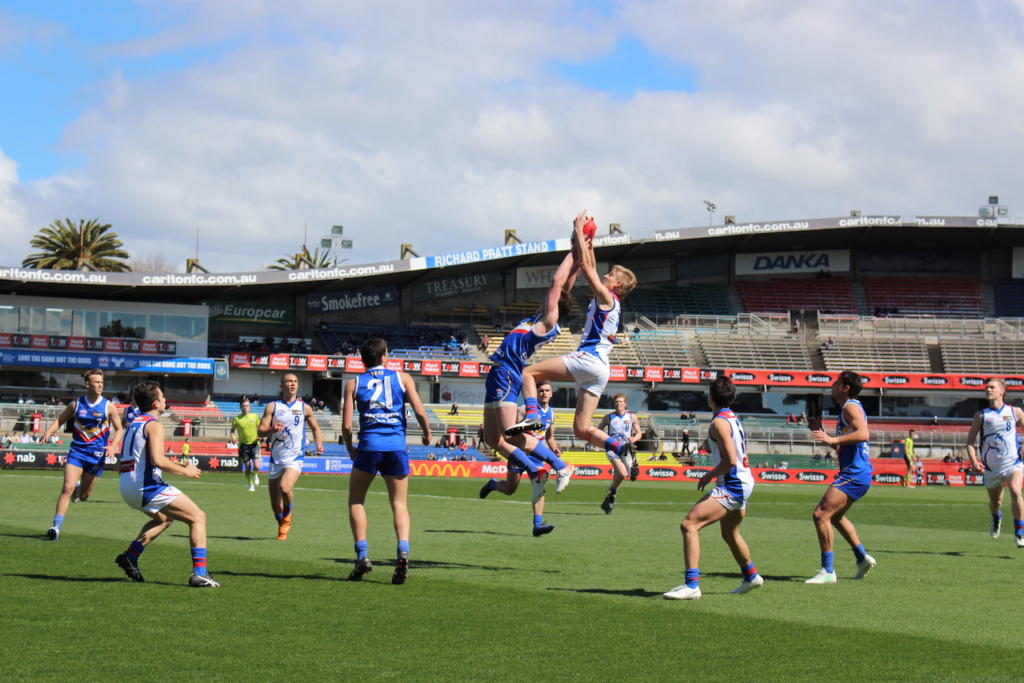 OAKLEIGH Chargers comprehensively earned its fourth NAB League premiership in eight years on Saturday with a 53-point grand final win over Eastern Ranges at Princes Park. There were plenty of players who shone amongst the array of stars on show in the year’s showpiece game, so we will be highlighting 10 outstanding players in this week’s edition of Caught the Eye. For extended profiles on each player, click their names highlighted in red, and for our full scouting notes on the game, click here.

Our scouts said: “Has his moments where he can break a game open, kicking a couple of goals either side of half-time and really making his presence felt. The bottom-age forward is a metres-gained player… ” – Peter Williams

Verdict: Like many in the Oakleigh squad, has really impressed during a dominant finals series. Loves to break the lines going forward and can make things happen with his bursts of speed, agility, and clever use. Could well move up the field in his top-age year, but has enough nous around goal to suggest he can maintain his position as a lively half-forward.

Our scouts said: “Had a huge opening term where he collected a game-high 10 touches and eight hitouts to really stamp his authority on the match. He was strong around the ground with a big contested mark in the second term…” – Peter Williams

Verdict: Has gone from strength to strength after some quieter games throughout the year, finally breaking through to truly show his potential. His attack on the high balls was impressive throughout this outing and if he can clunk a few more marks, watch out. The ruck craft is already there to go with his athletic traits, so expect Bryan to impress at the national combine and further push his daft case.

Our scouts said: “After being tightly watched by Mihaele Zalac, he started to get off the chain from the midway point of the second quarter, hitting up targets and having a real influence on the contest.” – Peter Williams

Verdict: The Oakleigh skipper is a ripper and showed his ability to ward off some heavy opposition attention at the ideal time. Undeterred by a few late hits, Bianco was aggressive with both his attack on the ball and use by foot, making him arguably the most damaging player afield. His versatility on the outside makes him desirable to clubs in a number of roles, with his size one of the few things really keeping him from cementing spot right among the first round calculations at this stage.

Our scouts said: “Working well with Rowell in the middle, was just a presence… tightly guarded at stoppages and often set upon once he won the pill, so did well to still find plenty of the ball and help his side on the inside. ” – Peter Williams

Verdict: It’s certainly not the first time Anderson has caught our eye – he does it every time he steps on the field and is an absolute lock to be a top three pick. He has it all; using his frame to prize the ball away on the inside, showing great agility to seldom find himself tackled and hitting the scoreboard at will. He garnered heavy attention in this outing so didn’t quite pull off the latter, but always manages to have an impact. So good to watch and is AFL-ready.

Our scouts said: “The bottom-ager showed why he will be a highly touted prospect next year with a competitive effort through midfield. Just attacks the ball with vigour…” – Peter Williams

Verdict: Looks a leading candidate for next year’s draft crop and continues to show glimpses of an all-round midfield game. While his work on the outside has been terrific for most of the year, Phillips has thrived of late at the centre bounces with his clean hands and turn of speed. Don’t be fooled by his stylishness though, Phillips is tough as nails and holds his own at the stoppages. Found the goals too in this game which is a welcome string to his bow.

Our scouts said: “Despite being the standout player in the draft crop, continues to surprise us. If you think he has reached the top, he smashes the ceiling and goes a bit more… He reminded us he was human with a couple of missed set shots, but outside of that was just a complete beast…” – Peter Williams

Verdict: The purpose of this piece is to highlight the players who are rising in stocks, so it’s a bit hard to have a player marked as number one improve his position. Rowell finds a way to do what others simply cannot, so we’re not putting anything beyond him at this point. Looks destined to adjust to AFL level in a similar way to Sam Walsh, never playing a bad game and proving a game-winner from midfield.

Our scouts said: “The midfielder had some exciting moments throughout… His run and carry and decision making is a highlight… (he) showed why the Chargers will be tough to beat again next year.” – Peter Williams

Verdict: Looks a little more forward-oriented than his Bulldog brother at this stage, but still has the work rate and uncanny ball-winning ability that his pedigree would suggest. Macrae’s run, agility, and use by foot have all been top notch of late, making him a key part of Oakleigh’s forward drives and a lively prospect for next year.

Our scouts said: “In what turned out to be a dirty day for Eastern a shining light was the game from young dashing defender Joshua Clarke who did everything he could to get his team over the line with his dash and dare from the back half.” – Ed Pascoe

Verdict: Clarke had some sort of second term, showing off all of his best traits and trying his best to break the game open with his run. The Ranges defence was under seige, and he was one of the few players with the dare to take on Oakleigh’s defensive pressure. He is making a habit of slotting goals from range on his left side too, and will be one of the leading attacking half-backs for next year.

Our scouts said: “Eastern’s Mr. Consistent couldn’t have done more this year to impress recruiters and despite his team coming up short, Stapleton did his draft chances no harm with a strong display through the midfield – showing his trademark tough play and team first attitude.” – Ed Pascoe

Verdict: As our scouts would suggest, there’s not much more that Stapleton could have done more this year in an ultra-consistent season. A good state combine could get him over the line in terms of draft hope, but clubs will undoubtedly already admire his production, two-way tenacity, and attraction to the big moments. Will be one of Eastern’s leading candidates come November.

Our scouts said: “Parker has had a fantastic finals series and he has certainly enhanced his draft stocks for the 2020 draft, again showing great composure and skill in defence.” – Ed Pascoe

Verdict: The Parker-Clarke combination in defence will be a formidable one in 2020, with Parker’s mix of aerial prowess and sureness by foot making him a productive member of the back six going both ways. His finals series was superb, but he showed glimpses of the same form in a number of games throughout the year, able to find a good amount of the ball and use it well. There’s a long way to go, but Parker is rising in stocks already.