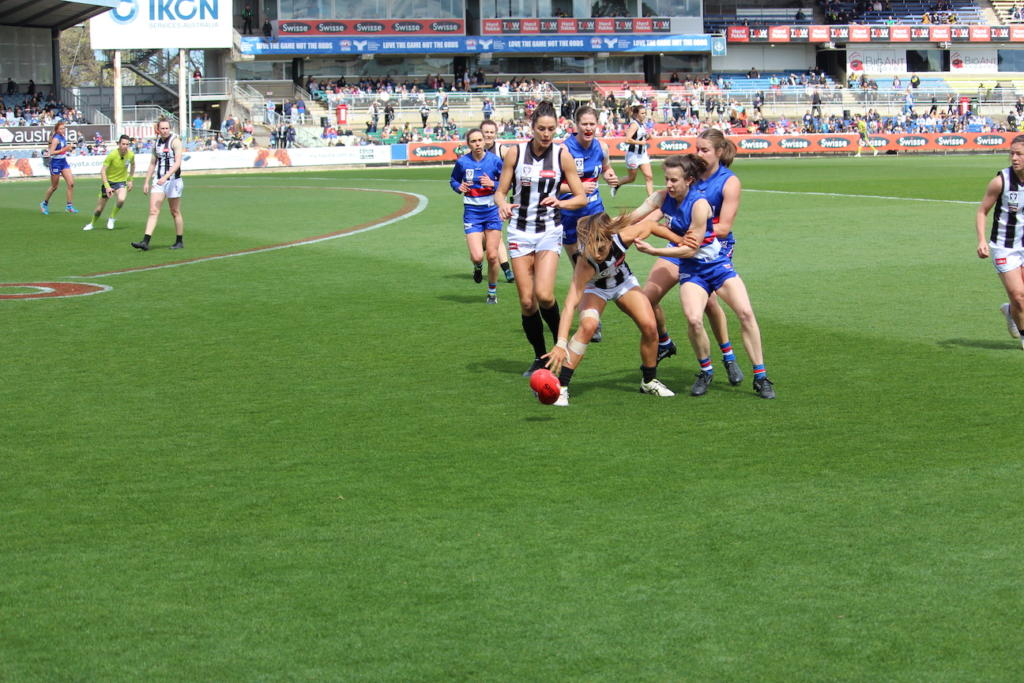 IN a special edition of scouting notes, we took a look at the Victorian Football League Women’s (VFLW) Grand Final with three players from each side having run out in NAB League Girls colours. We take a look at Western Jets’ Elisabeth Georgostathis, Greater Western Victoria (GWV) Rebels’ duo Sophie Molan and Ella Wood, and Oakleigh Chargers’ trio, Nicola Xenos, Gemma Lagioia and Alana Porter.

Started up forward and spent some time through the midfield in an okay Grand Final. Her defensive pressure was good laying a number of tackles during the game and threw herself into contest where needed. She intercepted a ball from the Pies early in attack and tried to force the ball forward into a scoring opportunity. Later in the game, she won a loose ball at a stoppage and kicked forward to about 30m out. Laid a big tackle in the final term at half-forward to lock the ball in late in the game.

Started on the bench but ended the most influential of the Western Bulldogs Under-18 players. She marked in the middle midway through the first term but her kick was intercepted, then went into the middle late in the term and stood beside Bri Davey at the stoppage. Molan showed great hands at the bottom of the pack, firing out a handball to a teammate just outside 50 to kick deep. She was sold into trouble in the second term with a missed handball, collecting it then immediately wrapped up. Her biggest moment of the game came when she won a free kick moments later with a terrific tackle on Sharni Layton. She lined up and converted the set shot from 35m out to boot the Bulldogs’ first of the game. She was quieter in the second half, but kicked well along the wing after a lucky bounce at half-back and then had a shot later in the game but the kick just bounced a bit short.

A quiet game with just the two touches as the 23rd player for the game, but it was what she did off the ball that was impressive. She laid four tackles, including nullifying a one-on-two contest in attack to hold up a Pies rebound enough to force a turnover. Went into the middle in the second term and used her attack on the ball to provide a tackling presence.

Started on the bench but quickly had an impact, picking up the ball in the first term and was met by front-on contact and won a free kick. She copped a front-on bump shortly after again and bounced back up to lay a great tackle and lock the ball up at half-forward. She continued to apply defensive pressure throughout the day, playing between both half-forward and half-back. Won a couple of big touches in the middle of the ground in the second term, and while her kicks were turnover in contest, she kept pushing hard, laying a desperate smother, albeit with her head. She looked to come off second best from that hit with the ball, but got up and kept playing. In the third term, Xenos went forward and had a quick snap around her body but it went out on the full. She had a neat kick out of defence late in the game when under pressure to clear it to half-back.

The star of the show from the Under-18 perspective with a massive game. Lagioia showed all of her talent in the game to pick up 14 disposals, three marks and boot a goal. Her first term was superb where she set up a number of scoring opportunities. Maddie Shevlin missed with the snap as did Chloe Molloy, but then set up a nice pass leading to a Jaimee Lambert goal, then handballed directly to Lambert for the forward’s second of the term. She was not afraid to go up in marking contests against multiple opponents and showed clean hands in the air or at ground level. She did so playing in defence in the second term and then pushed back to the wing where she was outbodied by the stronger opponent. In the third quarter she was in the right position to collect an errant Bulldogs’ kick at half-forward and kick deep to the forward pocket. Copped a knock close to the boundary line in the third and was sucking in deep breaths but carried on and marked 55m out and passed inboard well. Lagioia laid a great tackle inside forward 50 on Vaomua Laloifi to hold the Dogs’ up, and showed smarts to lead out and mark just inside 50 and put it to the square but was spoiled across the line. Lagioia collected a loose ball inside 50 but before she could snap was dragged down. Her final touch was the best of all, running hard into the perfect spot to receive the handball and ice the game with a cool running goal from 25m out to put her side 32 points up with seven minutes remaining.

A quiet game with just the two touches, but showed composure in defence with a quick kick under pressure early in the second term as the Chargers’ runners first touch of the day. Did well to restrict her opponent when the ball was in her area.