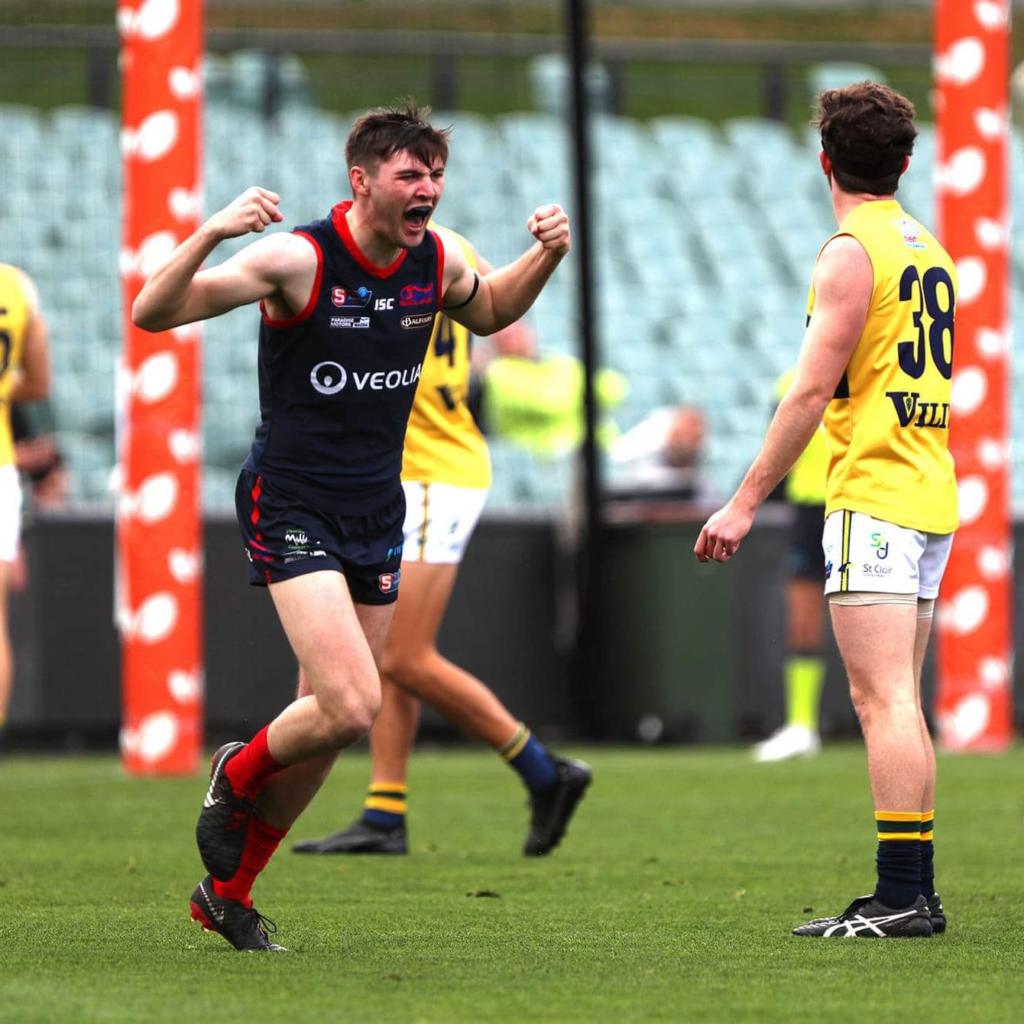 NONE of Glenelg’s newly-annointed premiership players were born the last time the Tigers received the South Australian National Football League (SANFL) premiership cup, but history was rewritten at Adelaide Oval yesterday when they knocked off the league’s most successful side, Port Adelaide. The Magpies had been a source of pain for the Tigers in the late 70s and 80s, finally winning a flag in 1986, but Bays fans then had to wait 33 years for their next triumph, which is why the celebrations were no doubt long and hard. In the Reserves, Norwood claimed a youth-inspired victory over Woodville-West Torrens as a host of Under-18 talent starred for the Redlegs to ensure three different clubs took out the three different leagues.

A fast start by Glenelg helped the Tigers claim a magnificent SANFL League premiership, booting the first five goals on their way to a 11.7 (73) to 6.9 (45) win. From the first bounce to the opening minute of the second term, Luke Reynolds had a couple of majors on the board, while Carl Nicholson, Bradley Close and Josh Scott were also on the board and the danger signs were there for the Magpies. Billy Frampton and Sam Mayes had combined for just three behinds up until Tobin Cox finally broke the goalless drought 13 minutes into the second term. Frampton booted his first following three consecutive rushed behinds, but the inaccuracy was hurting the Magpies as Marlon Motlop booted a major a couple of minutes later to ensure Glenelg headed into the main break with a 19-point advantage. By the time Scott and Motlop hit the scoreboard for the second time each in the opening four minutes, the lead was out past 30 points. Cam Sutcliffe did all he could for the Magpies, piling on three of the next four goals around Margarey Medallist Luke Partington‘s major to give Port a sniff going into the final stanza, cutting the deficit back to 21 points. But any hope of a comeback was snuffed out in the opening minute when Scott booted his third goal of the contest, and then the Tigers held on for the next 18 minutes until Cox broke through for his second. A sweet goal at the end of the game to Motlop had the Bays’ supporters over the moon at a drought-breaking victory. Glenelg dominated the keepings-off style with 21 more disposals and 28 more marks, withstanding the 14 extra tackles from the Magpies.

Matthew Snook took out the Jack Oatey Medal for best on ground after a game-high 28 touches, two marks, seven clearances, eight tackles and four inside 50s. Partington was also prominent with 23 disposals, four marks, five inside 50s and five tackles, while Jesse White had seven clearances from 16 disposals, 17 hitouts and six tackles. Under-18 talent Will Gould amassed eight rebounds to go along with his 18 touches and four marks – five of his rebounds came in the opening term, withstanding the Magpies’ heat. Up forward, Motlop and Scott combined for three goals apiece, while Reynolds’ two first quarter goals set the Tigers up. For Port Adelaide, Sutcliffe was the main source of goals with three from 17 touches and two marks, while Cox had his two majors from six touches and three marks. Jarrod Lienert picked up a team-high 27 disposals, as well as three marks, seven inside 50s and five rebounds, while Jack Trengove (25 disposals, eight marks, six tackles and three inside 50s), Mayes (24 touches, three marks, six tackles, three inside 50s and three rebounds) and Willem Drew (21 disposals, three marks, seven clearances, 12 tackles, four inside 50s and three rebounds) were all prolific in the game.

Norwood claimed the 2019 SANFL Reserves flag with a triumphant 25-point win over Woodville-West Torrens Eagles at Adelaide Oval on Sunday. The Redlegs crucially won the clearance battle by eight despite conceding 10 more inside 50s. Their defence was up to the task in the back half however, rebounding the ball 38 times to the Eagles’ 24. The game started on a strong note for the third placed Eagles as Harrison Morgan booted a couple of majors within two minutes and looked like he would be in for a big day. Under-18 prospect Cam Taheny then responded with a couple of his own and within 10 minutes the Redlegs were back in front by a point. Fellow Under-18 talent Kysaiah Pickett soon got on the board himself with a major, as the Eagles squandered a few opportunities but headed into the break with a seven-point advantage. They could only manage the three behinds in the second term however, as Norwood piled on four consecutive goals to head into the main break with a 15-point lead. Morgan booted his third goal of the contest to cut the deficit to eight points three minutes in o the third, but a response from Lachlan Pascoe and then Cody Szust soon had the minor premiers back on to a 20-point lead. Jake Westbrook added his name to the goalkickers list, but second goals to Pascoe and Szust either side of the final break pushed the lead out to 26. Jamie Coff brought it back to 19, but three consecutive goals to the Redlegs saw it blow out to 37 with 10 minutes remaining. Three consolation goals in the last 10 minutes to draft talents Jackson Mead, Pickett and Lachlan McNeil cut the Eagles’ final deficit back to 19, but it was too little, too late.

Norwood ruck Luke Surman won the Bob Lee Medal for best on ground following his 21 disposals, 18 hitouts, 11 clearances, two rebounds and two marks (one contested), rucking to the likes of Stephens (26 disposals, three marks, five clearances and five tackles and Jed Spence (27 disposals, six clearances and four tackles). Szust finished with three majors from 17 disposals, five marks, five inside 50s and six tackles, while Taheny booted 4.1 from eight disposals and four marks. For the Eagles, McNeil and Harry Schoenberg both had team-high 20 touches, with Schoenberg dominating the clearances with six, working hard with Jordan West (eight clearances, 21 hitouts and 14 touches) and Mead (14 disposals, four clearances and three inside 50s). Westbrook had six rebounds from 19 touches and seven tackles in defence, while Jack Gaffney picked up 19 disposals, three inside 50s and seven tackles.