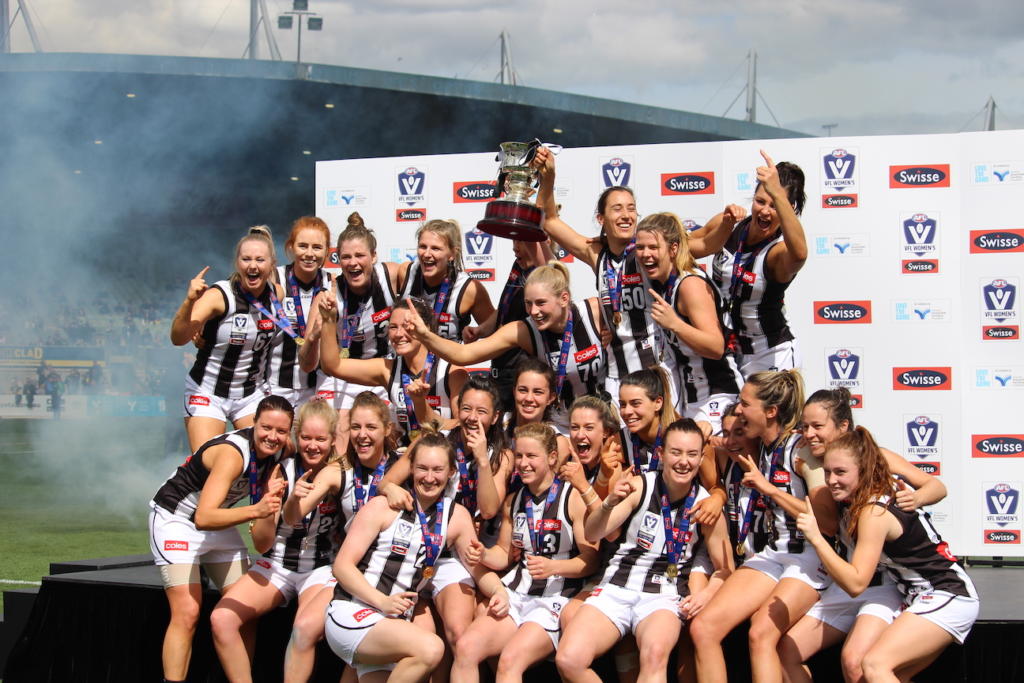 “TODAY is a historic day for our club” was the phrase used by Collingwood President Eddie McGuire who joined in the celebrations addressing the VFLW premiership winning side in the rooms after a thumping win over the Bulldogs. The Pies claimed their inaugural title and while the fans rejoiced the emotion from inside, the Collingwood walls was equally as passionate with McGuire sending nothing but praise for the women’s team.

“Today you women have set the tone and the foundation for the rest of Collingwood’s history,” he said.

With McGuire addressing the troops, coach Penny Cula-Reid struggled to comprehend the emotions she was feeling, left speechless to a certain degree after her sides resounding win. But when she managed to find the right words she labelled the emotion as “proud.”

“I wish there were words, proud,” she said. “We worked so hard as a group and a collective as a wider group. “I think this is great recognition for our program at Collingwood. “I think it is just fantastic that our girls now perform each and every week. It’s a relief but I couldn’t be more prouder.”

The momentous occasion stems further than just the club and players with Cula-Reid recounting her interaction with her mum after the win as the moment it all sunk in. After years of dedication to the sport the Pies coach was awarded for her hard work and when asked about whether the reality kicked in she said it hadn’t.

“It didn’t really hit until I saw my mum in tears, what this moment really meant not just for me but for my family who’s been there besides me,” Cula-Reid said. “For the hard work they put in and every time they support me and they always say “go get them Pen, we’ve got your back.” It was just a really special moment I had with my mum.”

The black and white army were out in full force privileged to see a consistent four quarter performance with Collingwood not relenting with their tackling pressure and commitment to the contest.

“Yeah the cliché of four quarter efforts. There was a little bit of a lull which we’ve been having but I think for the girls it’s just fantastic that they have been able to perform on a stage like this,” Cula-Reid said.

Cula-Reid handed the reigns to her younger players encouraging them to play their style while also highlighting how the VFLW is allowing players to develop and fine-tune their skillset.

“We just said mate go play, just go out there and play,” she said. “The key message from me was make sure we were composed with the footy, play with freedom but play with confidence. “One of the things that we always said was development was our main focus. If we can get games into our inexperience AFLW girls and the more they push through and play in moments like this and perform and can execute the skill, the better for our program.”

In another history defining moment for the club, they also racked up their first win on enemy territory – Ikon Park.

“This is the first win for the Collingwood Women’s on Ikon Park too, so that’s fantastic that we’re moving forward into our AFLW season that we know how to win on a stage like this. So yeah awesome for them,” Cula-Reid said.

Despite having a commanding lead for majority of the game, it was not until the 13-minute mark of the last term that co-captain Grace Buchan thought they had it in the bag commending the efforts of every single player in the black and white jersey.

“Everyone brought their A-game today, they went in hard doesn’t matter if they made mistakes because at least they’re going for it and they’re going in hard. Yeah definitely it’s a credit to every single one of the girls on our list, down to the coaches, the trainers, the staff, Collingwood Football Club and we’re lucky to be apart of something so special,” Buchan said.

Collingwood put up a stone wall in defence with Best on Ground winner Stacey Livingstone a lynchpin down back denying ball to penetrate into their defensive 50. The defender notched up a whopping 25 disposals and 10 marks showing her strength and while she does not play for individual accolades she was chuffed with the recognition.

“Oh yeah it was lovely,” Livingstone said. “But I definitely couldn’t have done it without everybody else on the field. “The only way I play my role is with everybody else and we played bloody well. “We knew that they flood our forward line. We just had to be composed and build the wall and not get sucked into their game.”