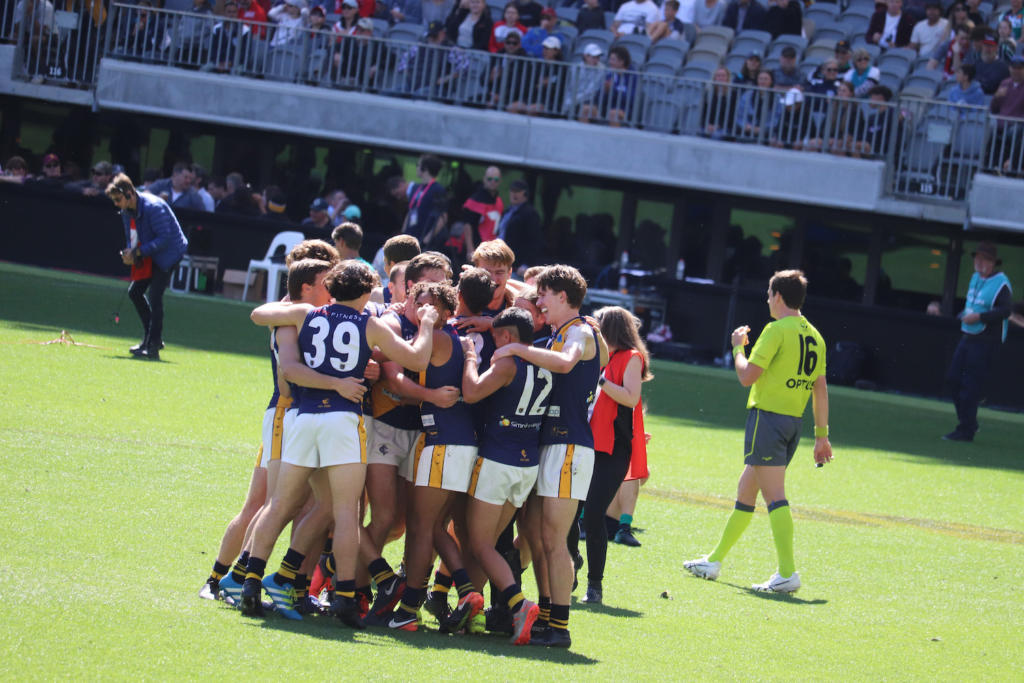 THIS YEAR was one that WA’s most talented youngsters tasted the ultimate success by winning the 2019 Under-18 National Championships. A number of the players in that squad took to Optus Stadium on Sunday for the biggest day on the WAFL calendar. With talent scouts aplenty watching on, there was a real opportunity for one or more of these youngsters to take one major step towards their AFL dream.

After losing their first game to the Tigers this season, Peel responded to claim their other two encounters with the latest being the second semi-final two weeks ago by 34 points in a grinding affair. It would be interesting to see whether the minor premiers would be lacking a bit of sharpness having played just one game in the last three weeks. In contrast, Claremont were match hardened having had three very solid hit-outs during September. The Tigers were aiming for their 16th Colts Premiership and fourth this decade, while Peel was looking to break a 14-year drought and win the third in their history.

Read below for a re-cap of what was a grand final for the ages.

He carries the same name as an NBA superstar and just like his namesake, Claremont’s Anthony Davis showed he was not afraid of the big moment by kicking the goal which won his side the 2019 Colts Premiership on a picture perfect day at Optus Stadium on Sunday afternoon.

The Tigers made a enterprising start with a goal to Jack Buller after just a minute of action. Peel then spent the next few minutes looking to find a response but the Tigers were intent on determined defending. The well deserved breakthrough for the favourites eventually came through Isiah Winder from a set shot. The Tigers were in the mood for a right scrap however, and Isaiah Butters took a strong mark and subsequently goaled from 35 metres. The lively forward then made it two in a couple of minutes when he converted an opportunistic snap. The Tigers were officially off to a flyer with Ben Schuhkraft kicking the Tigers’ fourth of the quarter. The swarming pressure of Claremont was a real feature all over the ground, as well as their ability to win the ball from stoppages and perhaps post-bye sluggishness was a factor too. But you never write off a class outfit and Peel did not finish a few games clear of their opposition without being exactly that. Firstly, Jarvis Pina converted form some quick thinking following a 50-metre penalty and then Ben Middleton made the most of a mistake by the Tigers on their last line of defence to cut the margin to two points at quarter time.

Peel claimed their first lead of the game early in the second term which resulted through some hesitant Tiger defence and Winder was able to snap truly from close range. The tide had now turned and it was Peel in the ascendancy. Some quick thinking was again able to catch their opponents off guard with Jaxon Egan converting. You felt Claremont needed the next one to stay within touching distance and stop the surging momentum of the minor premiers. Kade Lines delivered one on the chest to Max Spyvee and he kicked Claremont’s first for the second term. Middleton then responded by kicking his second from a acute angle, but the best forward on the ground in the first half was Butters and he kicked his third for the half through some opportunistic play.

The half-time margin was just four points in favour of Peel and it certainly reflected the state of the game with both teams having their periods of dominance but neither having that momentum to kick right away. Jack Cooley was the lead man when it came to disposals at the long break with 18 along with five inside 50s. Joel Western showed some great dash with 11 disposals while Callum Jamieson was giving his midfielders great service with 19 hit-outs. For Peel it was Tyrone Thorne with 14 disposals and Jackson Knight with 11 and three marks. Key mover Jarvis Pina was quiet with just six disposals for the first half but you would expect him to step up to the mark.

The adage that the third term is the premiership quarter was never more apt in this tight affair and Butters produced the best possible start taking a fine mark running back with the flight to kick his fourth to see the Tigers regain the lead. Buller was then left unattended 30 metres out and duly converted to give the Tigers a mini buffer. It was nip and tuck with mistakes occurring more readily due to some outstanding pressure by both teams. Peel nabbed back the lead in this fantastic ebb and flow contest when Ben Middleton kicked his third. The key forward was shaping as a match winner when he made the most of a pin-point kick from Egan and duly kicked his fourth major for the game. You could really notice the confidence in Peel’s play and there was no greater example than Middleton. He kicked his fifth for the game from right on fifty metres and Peel had their biggest lead of the contest, that being 14 points. The big question was if the Tigers had enough left in the tank to make one last push, or whether the favourites taken the Tigers best shot. What was certain was that the final 25 minutes of the season would be a fascinating one.

The Tigers started on the front foot showing everyone that they had something left in the tank by kicking two quick goals through Schuhkraft and Charlie Malone to cut the margin to two points. Connor Heuer responded for Peel to push the lead beyond a goal but once again the Tigers responded and it was Jye Clark with a quick snap.

It was certainly looking like the Tigers now had the momentum behind them and Malone was stepping up to the mark like good key forwards do. He produced a close range snap which was, the Tigers fourth in the term and gave them back the lead. There was enough time for Peel to hit back and Thorne hit back courtesy of a high free kick. Amazingly, there was another twist and with nerves of steel belying his age, Anthony Davis kicked his first of the game with two and a half minutes left on the clock and suddenly it was the Tigers game to lose. While it was the third lead change in ten minutes, there was still time for some late drama. Peel conjured up a centre break and stormed the ball inside 50. As the clocked ticked inside the 25th minute, you had an inkling there would be a hero in an attacking or defensive sense.

And it came courtesy of the latter with an outstanding piece of play by Tigers defender Leno Thomas in smothering a goalbound kick by Jonathan Ietto in the forward pocket which then ricocheted for a throw-in. It was one of those moments that will go down in club folklore for certain. A few seconds later, the siren went and it was jubilation for the Tigers and absolute devastation for the minor Premiers whose wait for another Colts premiership goes on. It might be scant consolation for the Thunder but once again, the Colts grand final was the best game on the showcase day for WA footy.

In a sign that you don’t need big numbers to have a quality game of footy, the overall disposal numbers were reasonably low (263-240 in Claremont’s favour). Inside 50s were understandably close (43-40 Tigers) but Peel had more scoring shots (22-17). It was also a testament to the closeness of the contest that the margin did not exceed 15 points throughout the four quarters.

Tigers midfielder Jack Cooley was the deserving winner of the Mel Whinnen medal for best player afield with 33 disposals, seven tackles, seven inside 50s and five tackles. Western was not as flashy as normal but displayed another side to his game by distributing by hand with 17 handballs and 23 disposals in total along with six tackles. Butters may have only had seven disposals, but his impact was incredibly telling to the end result with four goals and Malone was magnificent in the last quarter with two goals and had 11 disposals and three marks for the game. For the Thunder, Tyrone Thorne was involved in everything good that Peel produced for the game where he had 22 disposals, eight tackles three inside 50s and two marks. Middleton was absolutely magnificent as a leading target with five goals, five marks and four inside 50s to go with eleven disposals while Zachary Rankin was tenacious with 16 disposals, six marks, six tackles and five inside 50s.

The hard work is not done for a lot of these youngsters with the various draft combines taking place. For those who are selected, the sky will be the limit. And while there will be disappointment for those who miss out, there are plenty of examples of players who go through adversity and come out a lot stronger for the experience.