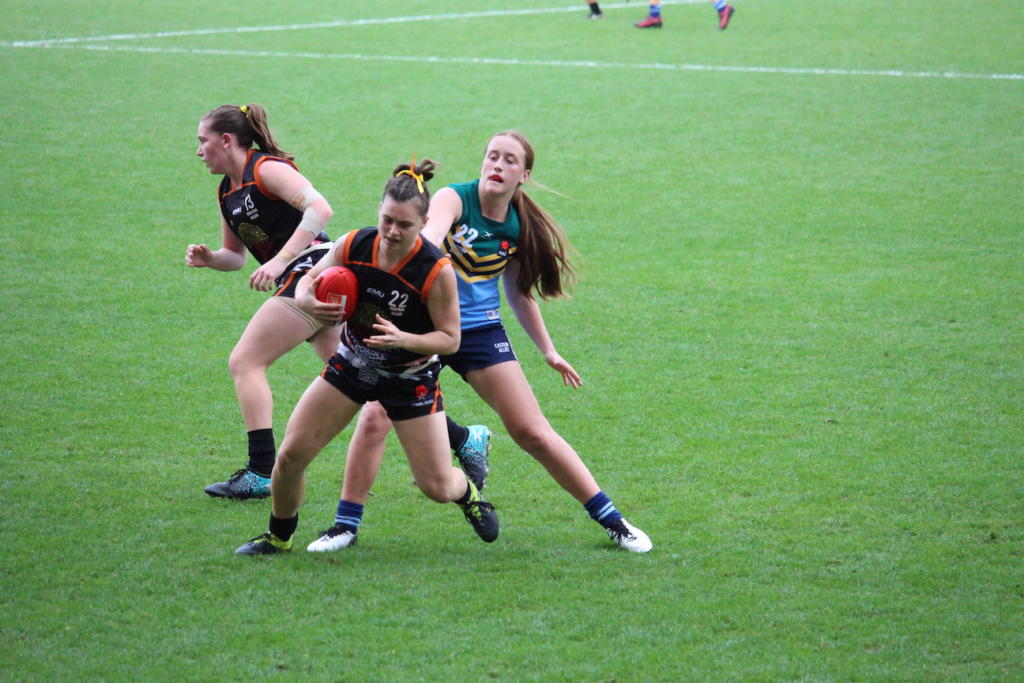 NORTHERN Territory Under-18 representative Alysha Healy might be a year older than many of her AFL Women’s Under-18 Championships peers, but is still learning everything she can about the game. Hungry for knowledge on and off the field, the exercise and sports nutrition student said whatever happens with her on-field career in the future, her goal is to find a place within an AFL Women’s club. Already the 19-year-old has been through quite a journey growing up in the NT and progressing through to the South Australian National Football League (SANFL) Women’s competition.

“I’m originally from the Northern Territory so I started playing for the Waratah Football Club, well it’s been three years now,” Healy said. “I started in the Under 18s and then the year after that I captained the Under 18s team and just last year I played in the women’s team and we actually won the grand final so that was an incredible experience to be with all those senior women we have in there.”

Healy said the experience of winning a premiership was hard to put into words.

“It’s just so unreal, the journey that you travel with those girls, you just can’t describe it,” she said. “It’s just one of a kind, you share so many memories and ups and downs in the season, your hard work, all your trainings, all the strength and conditioning, it just all pays off, it’s a sense of relief and those girls become your family and you just play for each other.”

While her on-field success is important, so is her future career off-field, which is why the switched on Healy is keen to follow her passion in the sports industry.

“I’m now based in South Australia for University so I’ve started playing for Sturt in SANFL and I’m obviously with the club and with me being an overager in this comp, I’m hoping to get drafted.” Healy said. “That’s the dream, to play AFLW and to just be exposed to that experience and that level of footy. “(I’m studying) exercise sports science and nutrition. “I’m loving it and if I don’t end up being drafted, hopefully I can be a support crew for one of the AFLW teams and still be involved there.”

Studying university full-time while also managing a growing football career can be challenging, but Healy said her sport-study balance is getting there, with her social life being the one area that takes a hit.

“It’s been a bit of a struggle, but I think I’ll grow as time goes on and I’ll start to get that balance, uni and footy,” she said. “I’ve got two footy trainings in the afternoons and I’ve got uni during the days so I try and keep my weekends free. “You can’t really have a social life when you’re trying to be a professional footballer I guess and that’s just some of the sacrifices you’ve got to make to be elite.”

Since crossing from Waratah to Sturt, Healy has realised how much professionalism has gone into the South Australian competition to continue to nurture and develop the future of AFL Women’s.

“It’s really good actually, it’s different to playing in the NT,” Healy said. “It’s different standards, the professionalism both on and off the field is there and I love it. “The people at Sturt have welcomed me with open arms, I love the club and I’m just excited to see where I can go from there.”

Healy describes herself as a fast player, credit to her athletics background which is something she has done since she was young. Her power and speed combination enables her to create separation from an opponent at a contest, and create headaches for opposition players. She admits her football IQ and skills are areas she can build on, with her technique and decision making her current focuses. Healy said she draws much inspiration from a world-class athlete.

“I read Sally Pearson‘s autobiography a few times over and just reading her journey and where she’s been, how she’s come through so many injuries and just kept going despite all the obstacles, to just be where she is now, she’s just an incredible athlete,” Helay said.

Her family have always pushed her to do what she loves, and Healy said she is forever grateful for their support.

“I’ve done so many sports over the years and regardless of what it’s been, they’ve always been so supportive of me,” she said. “They were there at my grand final with the biggest smiles on their faces rushing down to me. “I honestly don’t think I would be where I am today without them pushing me through and supporting me.”