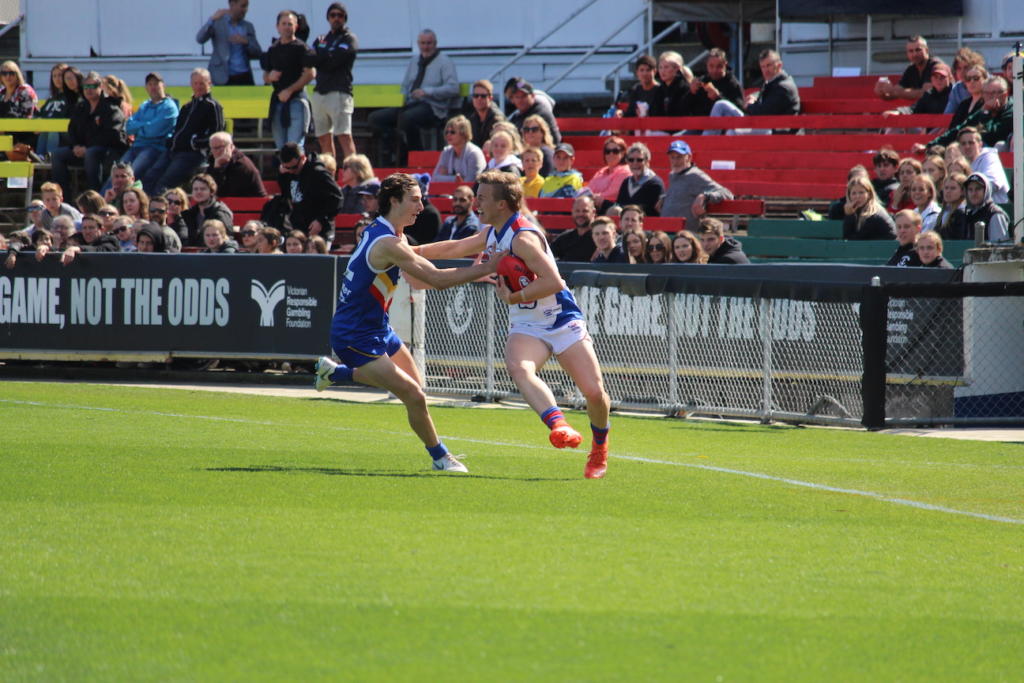 OAKLEIGH Chargers triumphed in this year’s NAB League grand final, with a wealth of draftable talent – including the best two prospects of this year’s crop – helping the Chargers to victory. There was also a number of bottom-agers who stood up on both sides along with the usual suspects who earned combine invites. Please note, each note is the individual opinion of our scouts.

Had a huge opening term where he collected a game-high 10 touches and eight hitouts to really stamp his authority on the match. He was strong around the ground with a big contested mark in the second term on the wing and then laying good tackles at ground level after following up in the ruck. He had a quieter second term, but finished off big to end the game with 20 disposals, four marks and three inside 50s.

After being tightly watched by Mihaele Zalac, he started to get off the chain from the midway point of the second quarter, hitting up targets and having a real influence on the contest. He had a solid second half and ended the game as a premiership captain, racking up 29 disposals, 10 marks and six inside 50s, pushing up to a wing and getting the ball inside attacking 50.

Working well with Rowell in the middle, was just a presence to have 12 disposals at half-time and 26 by the final siren. He was so strong through the centre and while he has had bigger impacts on the game before – not hitting the scoreboard on this occasion – he still laid five tackles and teamed up well with Rowell in the middle. Was tightly guarded at stoppages and often set upon once he won the pill, so did well to still find plenty of the ball and help his side on the inside.

The bottom-ager showed why he will be a highly touted prospect next year with a competitive effort through midfield. Just attacks the ball with vigour not to dissimilar to Rowell, and while he can be handball happy at times, had an even spread of kicks and handballs on his way to 16 touches, also hitting the scoreboard with two majors.

Despite being the standout player in the draft crop, continues to surprise us. If you think he has reached the top, he smashes the ceiling and goes a bit more. With 44 disposals in a grand final you are always going to enhance your draft prospects, but it’s a bit hard to go from pick one to pick one. Rowell just finds the footy and simply found it at will. Kicked a crucial goal late in the third term to extend the margin out to 20 points. He reminded us he was human with a couple of missed set shots, but outside of that was just a complete beast with 11 clearances, eight marks, nine tackles and six inside 50s.

Worked hard throughout the game on his way to three behinds from 10 disposals and eight marks and worked up the ground to present and produce six inside 50s as well. Full credit to Joel Nathan who restricted his chances and matched him in the air. The midfield also did not have as much time and space as previous weeks and the kicks were less pinpoint, and the Ranges’ defence was able to read the play well. But Ugle-Hagan still took a towering mark early and gave spectators a reason to see why he is so highly rated for next year.

The midfielder had some exciting moments throughout the Grand Final on his way to 20 touches and seven marks, only missing a couple of opportunities and finishing with two behinds on the scoreboard. His run and carry and decision making is a highlight and like a number of Oakleigh midfielders, showed why the Chargers will be tough to beat again next year.

Looked busy in the first term with a couple of chances, but uncharacteristically missed a couple of set shots before converting a sitter from the top of the square. Was not his best game, but still worked hard to provide a target and go on searching leads to drag a defender along with him. Had the nine touches and five marks from 1.2 to cap off a big rise up draft boards in the second half of the season.

In what turned out to be a dirty day for Eastern, a shining light was the game from young dashing defender Joshua Clarke who did everything he could to get his team over the line with his dash and dare from the back half. Clarke had some eye catching moments, using his speed to take the game on and get away from any would-be tacklers. He had a huge second quarter highlighted by a fantastic goal on the run on a hard angle and distance while also under pressure. Clarke’s second half wasn’t as strong as his first which was the same for most of his teammates but he had put his name in lights for next year’s draft as he looks one to look out for. Clarke finished the game with 22 disposals, seven rebounds and a goal.

Eastern’s Mr. Consistent could not have done more this year to impress recruiters and despite his team coming up short, Stapleton did his draft chances no harm with a strong display through the midfield – showing his trademark tough play and team first attitude. Stapleton showed a lot of aggression and class, picking up balls at ground level with ease and working back to help the defenders. Stapleton has not been a massive ball winner this year but he is incredibly consistent in winning enough of the ball and he was awarded Eastern Ranges’ Best & Fairest which was well deserved for the young midfielder. Stapleton finished the game with 20 disposals, six tackles and five inside 50s.

The small and creative Mellis had another solid outing showing his dash and eagerness to get the ball moving quickly any chance he gets. Mellis was important in the first half helping out the defenders in the first quarter and then offering attacking flair in the second, kicking a classy goal on the run. He would have another shot at goal in the third quarter but would narrowly miss. Despite that he had a solid game, winning 18 disposals to go with four tackles, four inside 50s and a goal and was also rewarded for Eastern, winning their runner-up Best & Fairest.

Parker has had a fantastic finals series and he has certainly enhanced his draft stocks for the 2020 draft, again showing great composure and skill in defence. Parker had a couple of hiccups which have been rare but considering the amount of inside 50s from Oakleigh there was a lot of pressure and certainly more than usual, but Parker stuck the course and finished the game strongly. Parker didn’t just show his good ball use but also his courage to sit in the hole and take some courageous marks. Parker finished the game with 27 disposals, five marks and 11 rebound 50s and couldn’t have done any more to help his team.

Downie had a quieter outing playing on the wing and struggling to get into the game. It was a shame as he is one of Eastern’s more dangerous players with ball in hand and it is no wonder they could not get their attacking game going without him kicking long inside 50 with his trusty left foot. He still had some nice movements with his composure and ball use by hand and foot but he will now turn his attention to the Under-17 futures game before the AFL Grand Final. The Hawthorn 2020 NGA prospect finished with 10 disposals and four inside 50s.

Pretty had a strong game through the midfield with his clearance work and attack on the ball again a feature. Pretty won most improved for Eastern having come into the year relatively unknown to scouts and was rewarded with a state combine invite so his draft chances are still alive. Pretty was a hard worker through the midfield and although he was mostly digging handballs out, he was doing his best to bring his teammates into the game. Pretty finished the game with 20 disposals and four tackles and topped the NAB League for disposals this year.