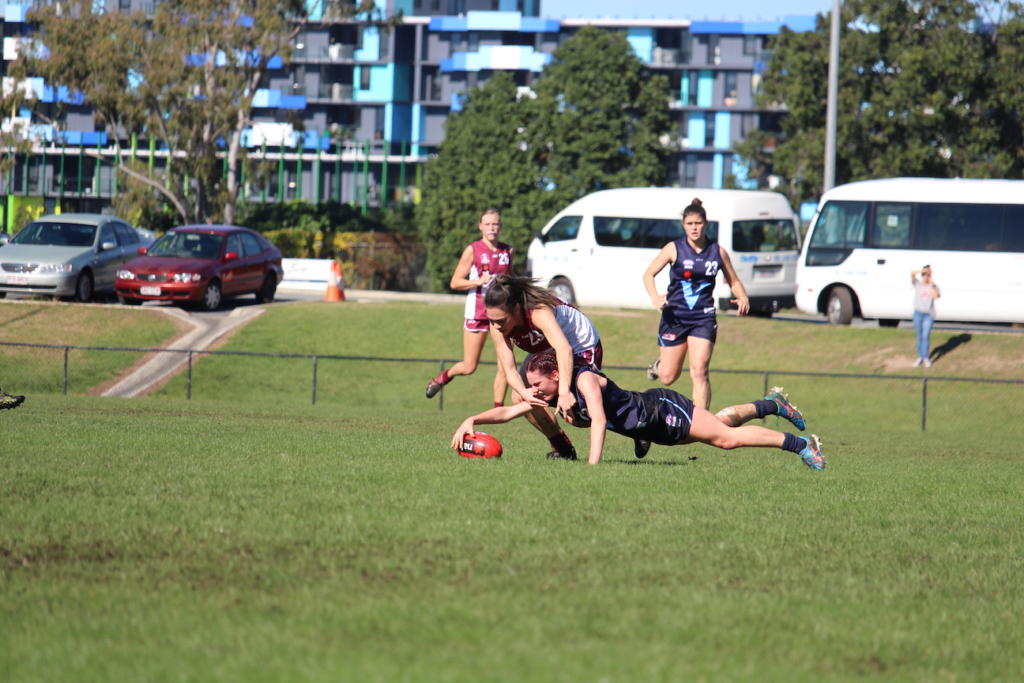 WHEN you are new to a sport such as Australian rules football, you always look to find a mentor who can fast-track your development. When your football coach at your high school is an AFL Women’s player, then it is even better. For Haze-Lee Martin, that was exactly the situation she found herself in when she decided to take up the sport.

“Someone who has had a really big impact on my footy journey so far has been Jamie Stanton,” Martin said. “She was my coach at school and then she’s helped me through what I’ve been like through footy so far. “Even though she’s moved to Melbourne to play with North, she still keeps in contact and makes sure I’m staying on track and getting to the goal, which everyone else is, which is the draft.”

Stanton has since returned to Queensland for her AFL Women’s career, announced as a signing for the Gold Coast SUNS. A nice coincidence that the pair might cross paths once again with Martin a member of the SUNS Academy.

“I’m very new to football, I started off playing touch and netball,” Martin said. “So AFL is pretty new to me. I’m a year in to footy. “I started here at the (Southport) Sharks, it’s my first time playing. “Then I played through Sunsets, and I was fortunate enough to make the SUNS Academy and then from there I was fortunate enough to get into the Queensland side, and I’m here now.”

The choice to switch from netball to football was a tough one, but Martin admitted she had fallen out of love with the round ball game.

“I was very passionate with netball,” she said. “I always said I wanted to play that sport and I wanted to continue to play and what not, but I just kind of lost the passion and then I had mates who played footy and were like ‘come have a go’ and played at school.”

There there was another sport that took up her time and added another element to her Australian rules football journey.

“On the side I play Rugby Sevens, so I had the running game different, the tackling’s so different,” Martin said. “It was all something I had to get used to. “I picked it up fairly quickly I’d say given I’m a year in, but I’m still learning.”

Her ability to move down the ground – something she learned in Rugby Sevens – and her fierce attack on the ball are among her strengths out on the football field.

“Definitely my run and carry (is a strength),” she said. “I’m actually playing in a new position in this carnival. “I’m playing off the half-back and off the back, so taking on the game through the mid, running with the ball, taking a bounce, that’s definitely my strength. “Of course. I normally play midfield, I started off playing mid and now getting pushed to the backs and having to learn that mentality, having the mongrel, but still having the drive to want to attack. “It’s difficult, but it’s do-able.”

Martin said she hoped to improve her cleanliness at ground level and go hand-in-hand with her strengths to be able to give herself extra time with ball-in-hand if she was able to pick it up cleanly. All these areas she brings up with her mentor Stanton, someone who no doubt will continue to be a wealth of information for the aspiring AFL Women’s player.

“There’s not one thing we don’t talk about,” Martin said. “We talk about everything. “There’s some things I do well in a game, things I could improve on, just anything. “She’s had a major impact on (my game) and she’s also a mid player, she’s played down back as well so I feed off what she gives me as well.”