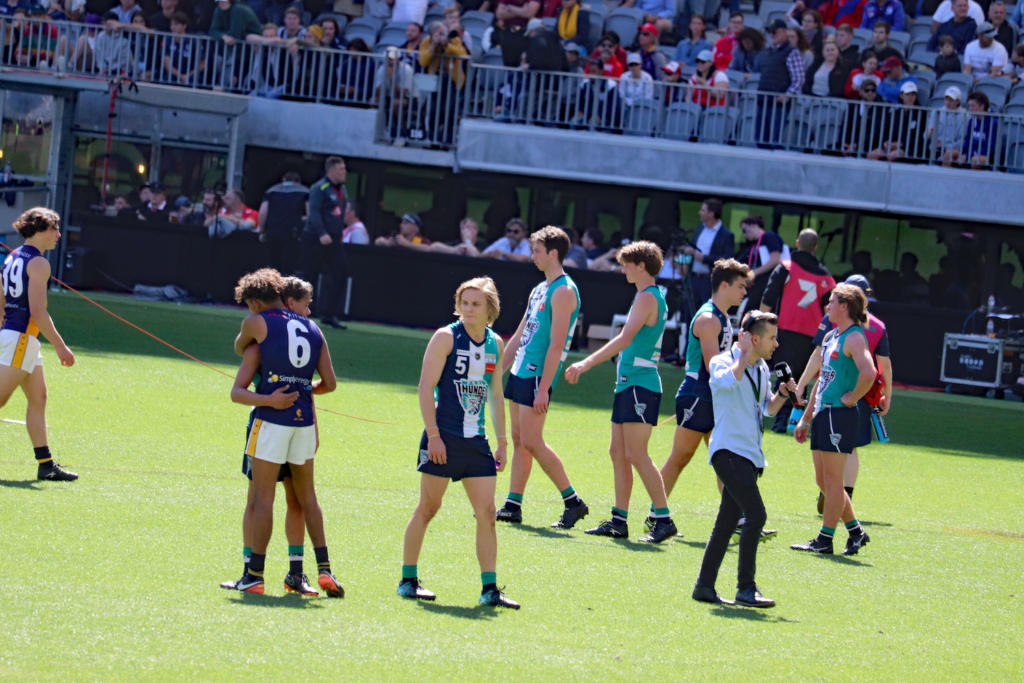 CLAREMONT secured its fourth WAFL Colts Premiership this decade with a stunning five-point victory over Peel Thunder at Optus Stadium.

The Tigers got off to a brilliant start in the game when Jake Wilson found Jack Buller inside 50 within the first minute of the opening term. Buller went back and converted his first goal. Moments later, Peel got one back when Zachary Rankin speared a pass onto Isiah Winder who drilled through the Thunder’s first goal. Isaiah Butters kicked two great goals for the Tigers soon after; the first one came after he took a strong contested mark inside 50, and moments later he cleanly collected a bouncing ball before snapping through his second. Logan Young then added another one for the Tigers to extend the margin to 14 points. After receiving a 50m penalty, Peel captain Jarvis Pina played on, due to no-one being on the mark, and nailed a goal from 40m out. Ben Middleton snapped through his first goal soon after to reduce the margin to just two points at quarter-time.

The Thunder got off to an excellent start in the second quarter when Winder stepped around his opponent before he snapped through his second goal of the game. Soon after, Jaxon Egan nailed his first goal of the game, but Claremont’s Max Spyvee converted his set shot to score the instant reply. Middleton took a strong contested mark inside 50 on the boundary line, then wheeling around and snapping through his second goal. Just before the half-time siren, Butters roved a pack expertly and snapped through his third goal of the game, and kept Claremont within four points of Peel.

After the main break, the Tigers got off to an excellent start. Jye Clark kicked the ball inside 50 and Butters took a great mark going back with the flight of the ball. Butters then kicked his fourth goal. After receiving a free kick, Kade Lines speared a pass onto Buller, who went back and kicked his second goal. But from here, the Thunder and especially Middleton started to shift momentum. Winder speared a pass to Middleton who took a great diving mark, before he converted his third goal. Moments later, Middleton led strongly and was rewarded with a great pass from Egan. Middleton went back and nailed his fourth goal. Just before three-quarter time, Middleton used his body well in a marking contest to take a strong contested mark, before going back to kick his fifth goal. At three-quarter time, the Thunder had jumped to a 14-point lead.

In the third minute of the final quarter, Ben Schuhkraft took a strong contested mark on the goal-line and then kicked his first goal of the game. Charlie Malone roved a pack expertly, before putting through his first goal and suddenly the margin was just two points. Peel’s Connor Heuer kicked his first goal of the game to push the margin out to seven points. Clark then snapped the ball out of a pack to bring the margin back to just one point. Malone then snapped through his second goal after he roved a ruck contest brilliantly to put the Tigers back in front. Tyrone Thorne was awarded a free kick for being taken high in the 21st minute. The Rockingham Junior went back and slotted the goal to put the Thunder back in front. Two minutes later, Anthony Davis intercepted an attempted rebound out of defence by Peel and then slotted a goal that put the Tigers back in front. In the dying seconds, Jon Ietto had the ball on the boundary line and went to snap it through, but Leno Thomas became the hero for Claremont, smothering the ball out of bounds to secure victory for the Tigers.

Keep an eye out tonight for an extended wrap of the game, and scouting notes through the week.