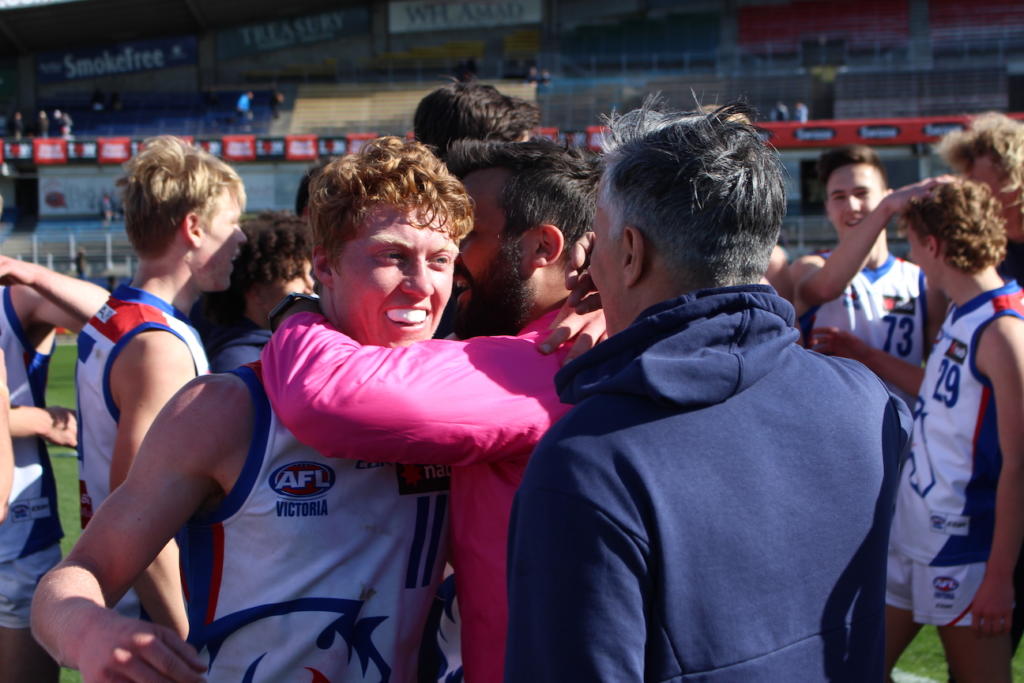 THREE years in charge, two grand finals, one premiership. That is not bad going by anyone’s standards, and it is exactly what Oakleigh Chargers coach Leigh Clarke has now achieved at the helm of his NAB League side.

A former Charger himself in the mid-90s, Clarke led his troops to premiership glory a year after falling short by a single goal to Dandenong Stingrays. In that same year, Oakleigh delivered a record-equaling haul of 11 AFL draftees, and while that feat is unlikely to be matched for a second year running, the Chargers boast arguably the best two players in the entire draft crop.

Defining success in the NAB League is difficult – how do you weigh team achievements against the goal of getting as many players drafted as possible? The Chargers seem to have found the perfect balance over the last decade, culminating in yet another year of success. It is a case of getting their just desserts in Clarke’s eyes.

“We’re not going to apologise for the talent we’ve got,” Clarke said after his side’s comprehensive 53-point grand final victory.

“For (our players) to turn up like they did today and produce under the pressure against a team that… had done their homework and clearly came to play individual roles which really worked well from the first half, all credit to our boys they really deserve to feel what they feel right now.”

“We knew what we were going to get from (Eastern) and credit to the boys, we talked about how it was going to be an arm-wrestle, it was going to be physical and personal game and the boys were able to come out and just play that momentum game.”

Planning to ride out waves of momentum is all well and good, but you need the cattle to be able to generate it on your end. Enter Matt Rowell, who firmed as the clear best Under-18 player in the country on the back of a second-straight grand final best afield performance.

The same honour, but a much different outcome this year for the prolific midfielder.

“Obviously it’s a much better feeling this time around after last year,” Rowell said post-match.

“It really hurt last year, we really wanted to get back to this stage and we’ve gone one more so (I) just couldn’t be prouder of the boys and the way we went about it. “(Individual honours) is not what I play for, I’m just much happier this time around getting the medal because we won.”

A similar sentiment was shared by Oakleigh captain Trent Bianco, who played alongside Rowell as bottom-agers in last year’s losing decider. Somewhat lost for words, the damaging outside mover stumbled on his cliches amid the euphoria of premiership victory, but the message remained true.

“What a difference a year can make, this time last year we were arms in our heads, hands in our arms, whatever it is,” Bianco said with an ear-to-ear grin.

“It’s a pretty surreal feeling… we were pretty upset (last year) but we used that as a bit of motivation, so throughout the pre-season it was in the back of our minds the whole time. “We definitely wanted to get back here and we did.”

If getting back to the last game of the season was not arduous enough, the Chargers knew full well that minor premiers Eastern Ranges were not ever going to be a side to let up. But Oakleigh came prepared, armed with the experience and hurt of 2018 on top of two previous wins against the Ranges this year.

Rowell and Bianco also respectively lauded their side’s ability to “stick it out” and “fight through” the Ranges’ early challenge, something that comes more easily with said preparation and the right coaching.

“We prepared well all week, we knew what was coming at us,” Bianco said.

“We try and keep it pretty similar, we didn’t change anything throughout the week training-wise… and just tried to keep it real simple and tried to get our heads in the game – not thinking about too many external pressures or anything. “Credit to the coaches, I think we were led quite well.”

“Like (Trent) said, just keep it simple. “It’s always in the back of your mind, especially the big game but (Clarke) said before the game ‘The bigger the game, the simpler it is’ so that’s just what we went in with,” Rowell added.

It seemed the game went to plan – the margin would suggest as much – but preparation can only take you so far. There are key moments in every game, and it was a roll of the dice move on Oakleigh’s part which unearthed an unlikely hero in the third term.

“We made some changes in the third quarter with Jeromy Lucas,” Clarke said.

“Full credit to him, he came out and kicked three goals in that quarter and started to turn the game for us. “That was exciting and credit to the coaches in the box, that was a discussion that was brought up in the box, we back the boys in the box and pulled the trigger on that and I think it was a key moment.”

Oakleigh’s defensive pressure was admirable all day too, but it seemed a switch flicked mid-way through the third term as Lucas and Oakleigh poured on the goals.

“I just think it was our forward pressure and creating those forward half turnovers which were really key to us piling on six or seven unanswered goals,” Bianco said. “We just backed our game plan and backed our players and that’s what got us there.”

GWS Academy product Lucas’ three goals were accompanied by two from Rowell in the same term, stretching the Chargers’ lead from as little as three points, to 44 at three-quarter time. Arguably the best goal of the lot belonged to Rowell, with his 60-metre bomb on his non-preferred left foot well and truly signalling party time for Oakleigh. Despite the incredible effort, Rowell was reserved both in the moment and when describing it.

“It came off sweetly, I didn’t think it was going to go that far but it just ended up sailing through,” he said. “I think the wind helped a bit.”

“He practices a lot,” Clarke said of his young champion’s feats.

“The true modesty of Matt, we encouraged him over the past month to really celebrate a goal, he said at best he’d give us a thumbs up. “We challenge our mids, they get a special prize of a t-shirt if they kick two goals as a midfielder, so we were riding those last couple of shots. “We had a motorbike last week from Jamarra (Ugle-Hagan) as well, we encourage the boys to celebrate the good moments, that’s for sure.”

And celebrate they will, with their incredible season capped off by a true sense of redemption for the Chargers’ top-end.

With the on-field business out of the way, the likes of Rowell and Bianco will now turn their attention to the national combine before November’s draft.