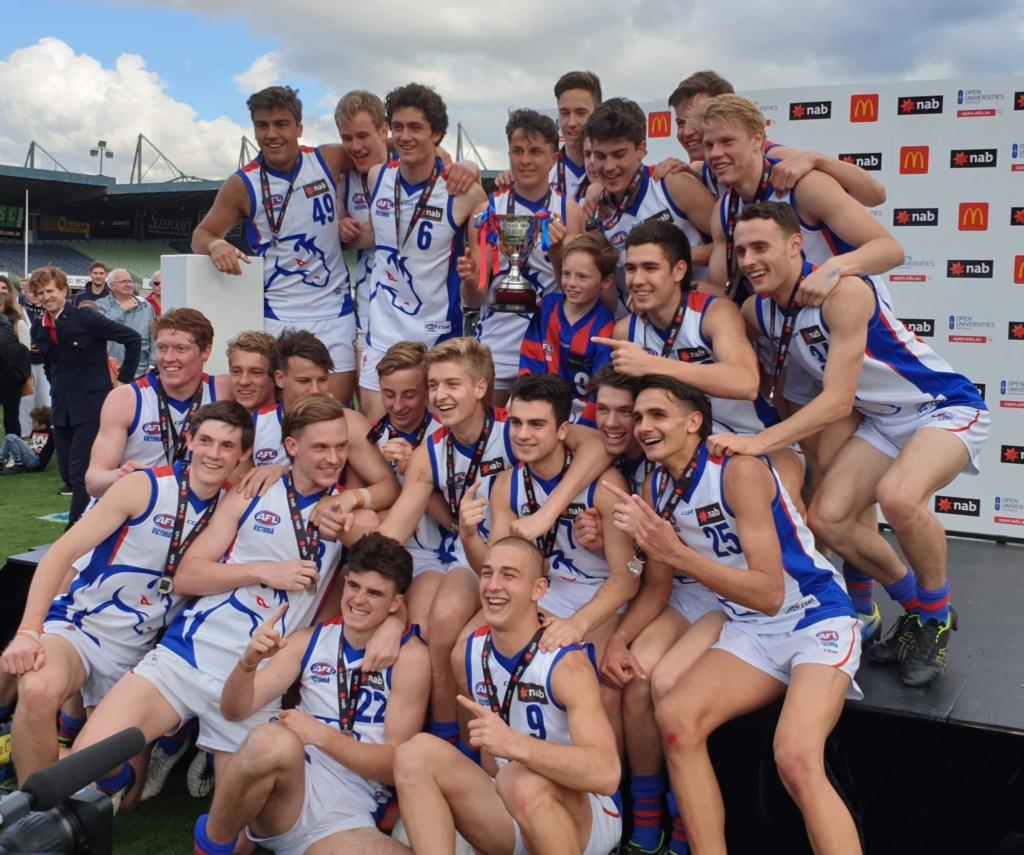 IT was the 10 minutes that won Oakleigh Chargers the premiership that eluded them last year.

Seven goals from the 15-minute mark of the third term to the final break broke the hearts of Eastern Ranges supporters, and elevated almost certain pick one, Matt Rowell into another stratosphere with an absolute masterclass performance. While it was a terrific team effort by the Chargers to outwork the Ranges, there was no stopping Rowell who won the Best on Ground Medal with 44 disposals – the second most disposals by any player in a TAC Cup/NAB League Grand Final behind Mitch Wallis’ 47.

Rowell and Noah Anderson were busy from the opening bounce, combining well at stoppages, while Trent Bianco was receiving close attention and gave away a free kick for retaliating from Mihaele Zalac. Both Jamarra Ugle-Hagan and Cooper Sharman had chances early but missed, with Will Phillips opening the account for the Chargers early in the game with a terrific goal on the run from 40m to entice a huge roar from the crowd. Oakleigh continued to pepper the Lygon Street end, booting four consecutive behinds. The causalities were beginning to piled on for the Ranges as Joel Nathan and Tyler Sonsie were helped off the field within a minute of each other. Connor Stone took advantage of the extra forward and found Sharman all alone in the square with the reliable goalkicker making no mistake from 10m out.

Everything was going right for the Chargers in the first term. Stone appealed for a soccer off the ground in the goalsquare but it looked to be a fresh airy. The normally composed Eastern defence looked under siege as Sharman ran down an opponent deep in defence, but his set shot too tight to the boundary but missed. Similarly, Bailey Laurie had a great chance with a running shot that bounced through but was deemed touched off the boot and brought the Chargers to 2.7 for the first term. Then the first massive highlight for Eastern came with a much-needed goal from Harrison Keeling in the pocket with 17 seconds left on the clock. It was the last kick of the quarter as the Ranges breathed a sigh of relief knowing for all of Oakleigh’s dominance, they were 13 points down and in the contest.

Nick Bryan was dominant around the ground for the Chargers, picking up 10 disposals, two marks and eight hitouts in the first term, while Jeromy Lucas (eight) and Phillips (seven and a goal) were also prolific. For the Ranges’ Wil Parker was steady in defence with nine disposals and three rebounds, while James Ross (six touches, two marks) was also busy back there. With 17 inside 50s to five, the Chargers were dominating play, but the Ranges defence was doing enough to limit the score in what could have been a lot uglier for them.

Both sides’ pressure was high as neither team had much time and space to move on, if they found space they had to move it on quickly as opponents closed them down quickly. Just as either side needed a deadlock breaker in the second, it came in the form of Mitch Mellis who burst forward, took a bounce and then launched from 45m for it to bounce home and all of a sudden, the Ranges were back within a kick. The Chargers almost scored a goal from a turnover up the other end, with Thomas Graham winning a loose ball after a spill and snapped around his body only for it to hit the woodwork. Up the other end, Zalac was running into 50 when he unsuspectingly got mowed down by Vincent Zagari. Both sides were finding more open space with end-to-end plays, but a couple of attempts under pressure on goal resulted in behinds for both sides.

Eastern’s defence was desperate and managed to keep a one-on-one ball close to the line in play but the kick landed in the waiting arms of Rowell who showed he can find the footy even when he is not looking for it. His set shot was un-Rowell like though and it was a shank short. Then Eastern seized on the miss as Josh Clarke ran inside 50 dropped it onto his left, negotiated the breeze perfectly and slammed it home to the roar of the eastern faithful and the scores were level again. Oakleigh’s midfield was getting stuck into Zalac to try and let Bianco off the leash, and Bianco’s extra freedom with his slicing kicks was starting to have a real impact on the contest. Both sides were still making uncharacteristic errors going forward, but it was a terrific contest. With a few minutes remaining, Finlay Macrae found some space inside 50 and his set shot from 40m looked good until a late drift that went through for a behind. With the siren imminent and the Chargers leading by three points, Laurie snuck out the side of a forward stoppage, put it on the outside of the boot and it sailed home to give Oakleigh breathing space heading into the main break.

Clarke was a massive player in the second term, picking up 13 touches to head into the break with 18, the most of any Ranges player, while Rowell had one better with 19, as well as three marks and three tackles. Bryan and Lucas both had 13 touches for the Chargers, while Parker (13) and Mellis (12) were the other two who had an influence for the Ranges.

If Rowell needed to convince anyone else how likely it was that he would potentially edge closer to a second best on ground in an Under 18s Grand Final, he found space in the middle and put out a perfect kick to Ugle-Hagan on the lead in the early moments of the game. He missed his set shot, but Oakleigh continued to press forward of centre. Despite holding the momentum, it was Eastern’s second forward 50 entry in the term that saw Jonte Duffy snap off his left and put the margin back to just four points to remind the crowd it was game on. Not long after, Jamieson Rossiter proceed to be the facilitator with a perfectly weighted kick to Jordan Jaworski. His tight set shot also missed, but the heat was well and truly in the game.

Then came the 10 minutes that won Oakleigh the premiership. The exciting Laurie then converted his second goal, sidestepping an opponent on a run towards goal and launching from 50 to add a bit of spice to the margin. Moments later forward pressure saw the Chargers run down Ross in the back 50, then a ruck stoppage from Sharman resulted in the ball landing in the arms of Lucas who snapped and goaled off the right and the margin was 14. When Rowell stepped up to win a 50m penalty and deliver to make it 20 points, it looked like it was going to be tough for Eastern to get back. After Lucas booted another two in two minutes, Rowell booted his second with a long-range bouncing kick that never looked like missing. He could do anything and so could the Chargers, as Thomas Graham capitalised on another Eastern error and snapped around his body and the game was well and truly done and dusted.

The heat was out of the game after that 10-minute blitz, and Nick Stathopoulos added his name to the goalkickers and it was party time for the Chargers in the final 25 minutes. Rowell had to remind onlookers her was human with another set shot miss. It was not long before he was in the thick of it again with a goal assist to Phillips who delivered on the run. Rowell again marked inside 50 but again missed his set shot. Ben Hickleton kicked a consolation goal late in the match as Rowell passed 40 touches. Ugle-Hagan had one last shot after the siren, but it hit the woodwork and the final margin was 53.

Rowell ended the game with 44 touches, eight marks, eight tackles, six tackles, two rebounds and 2.2, while Bianco (30 disposals, 11 marks, three tackles and six inside 50s), Anderson (26 disposals, four marks and four tackles) and Schreiber (26 disposals, 11 marks and two tackles). Bryan built on his form from last week with a dominant performance in the ruck with 20 disposals and 26 hitouts, while Lucas booted three goals and was dominant during that third quarter blitz. For Eastern, Parker had 27 touches, five marks and 11 rebounds to be the Ranges’ best as a bottom-ager, along with fellow bottom-ager Clarke who amassed 23 touches and seven rebounds. The midfield trio of Stapleton (19 touches), Pretty (19) and Mellis (18 and a goal) were consistent as usual, while Nathan did his best on Ugle-Hagan to keep him goalless and tack ip 16 touches and five rebounds.