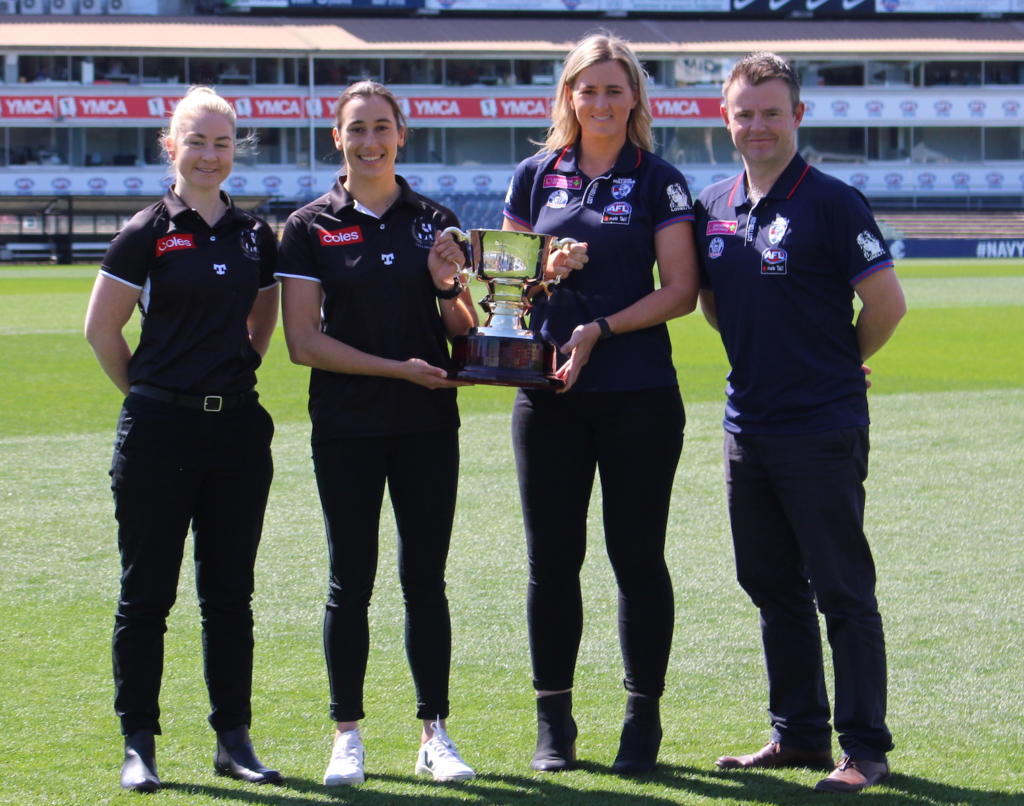 A MASSIVE VFL Women’s season and finals series all leads up to the Grand Final this weekend, with a blockbuster match between Western Bulldogs and Collingwood kickstarting a big day of footy action at IKON Park. While Collingwood sat atop the ladder for majority of the season and have class and confidence to boot, the Bulldogs have the added bonus of a six game winning streak, with the most recent a 12 point victory against the Pies in the semi-final two weeks ago. However, the Magpies cannot be written off, with a stellar performance in the preliminary final last week earning them a well-deserved spot in the grand final.

With big names headlining both sides, this match is a battle that will be won through the midfield. Though both coaches have their own game plan, Collingwood’s Penny Cula-Reid and Western Bulldogs’ Sean Kavanagh can agree on one thing – they must stop the midfield flow to limit ball movement coming out of their attack.

“We’ll really need to control and influence the supply, not just through our backs but emphasising through our midfield and the way it comes out of our forward line as well,” Kavanagh said, stating that star players like Jaimee Lambert will find the footy regardless of defensive efforts.

“It seems like we’ve got similar game plans,” Cula-Reid said. “It’s stopping it at the source, trying to defend the whole ground and not just our back half. We know they’ve got a few speedsters down back so it’s just making sure the ball doesn’t get down there, that’s the biggest thing,” she said.

Dominant players such as Britt Bonnici and Bri Davey have the ability to find the ball anywhere on the ground so it is key for the Bulldogs to limit ball movement coming out of their attack. The Western Bulldogs will be aiming to prevent the Pies from getting any freedom in the forward half, with Lambert able to take advantage of any ball coming her way.

The 2019 leading goalkicker has impressed week on week, dictating play with ball in hand and proving to be a massive threat inside 50 with her accuracy and footy smarts to boot.

While the Dogs may not have that one star player up forward who they rely on to boot a bag, it creates a host of issues for the Magpies who will need to lock up their defensive half to reduce the options inside forward 50. Brooke Lochland and Danielle Marshall are just two of a smattering of impressive performers inside 50 for the Bulldogs who could cause headaches for the Pies.

The Bulldogs’ semi-final victory graced the side with a week off prior to the grand final, while the Magpies played the Southern Saints in the prelim. With both sides making their first VFLW grand final appearances on the weekend, it make this match a big one for the progression of women’s footy especially ahead of the AFLW draft.

“One of our main things was to play as many games as possible, giving our VFL girls the opportunity to showcase what they have ahead of the drafting,” Cula-Reid said, with the extra game last round hopefully giving the Magpies an added edge when they take on the Bulldogs.

For Kavanagh, it is the improvement of young up and comers that has spurred on the Dogs in their finals campaign. The Bulldogs come into this match with confidence in their back pocket and a good batch of players that has solidified with every match this season, forging connections across the field with young gun Elisabeth Georgostathis fitting in seamlessly with the likes of captain Mickayla Ward.

“The gap between our AFL and VFL girls is closing which has been very pleasing. That’s our role, that’s my role, to develop these girls for the draft,” Kavanagh said. “If they end up in a Bulldogs jumper – fantastic, and if they don’t, if they’re on an AFLW list next season that’s ultimately where we want to get them to. So that development is probably where our improvement has come from.”

While the Bulldogs have confidence and improvement on their side, the Magpies have the belief, class and determination to call the shots if they play their game right.

“It’s which team can play their brand the longest, which team can play four quarters, who doesn’t have the lapse of concentration during the game,” Cula-Reid said. “It’s been a long season for the girls, the staff, the coaches, but it’s one more week, one more game, it just happens to be the most important game of the season.”

“The Bulldogs play a great brand of footy and we’re really excited … hopefully we play our game a little longer than they play their game and see the best team win.”