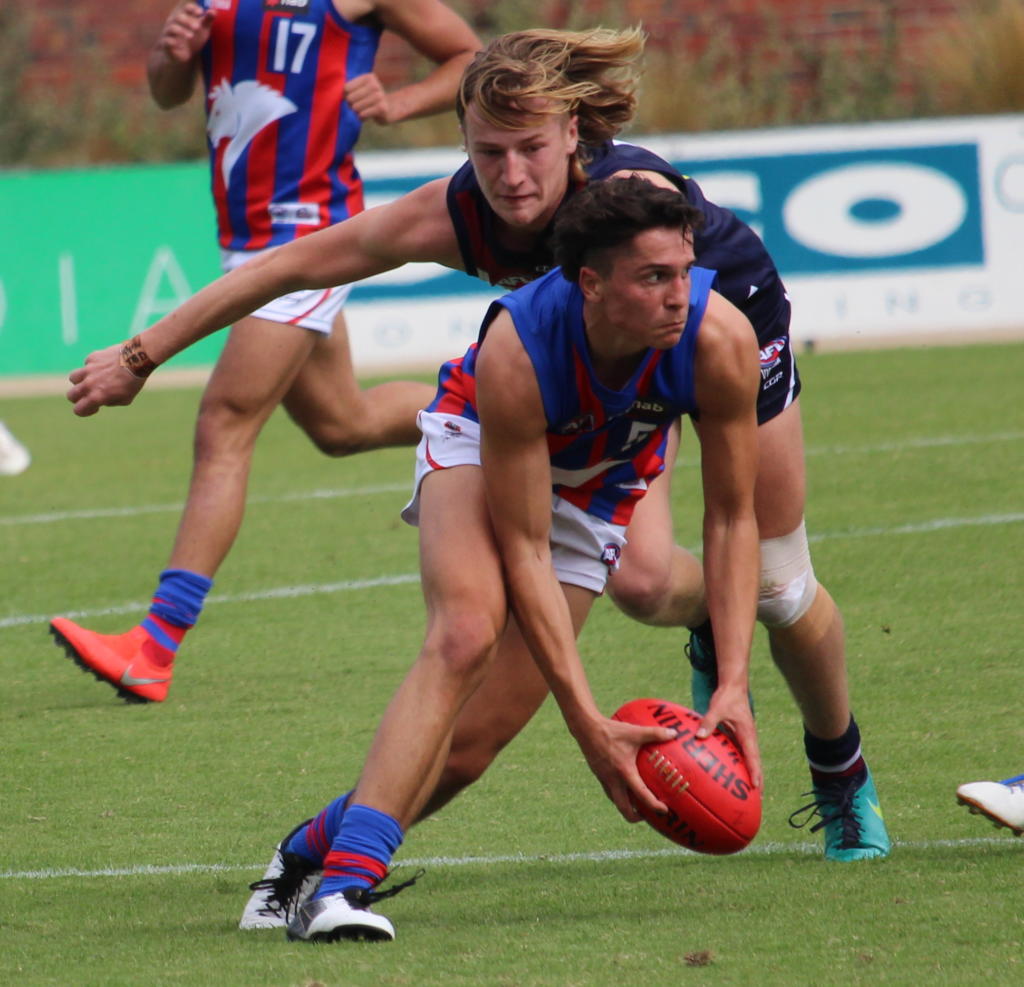 Tapering expectation is difficult when in the midst of a pathway renowned for both its production of top-end talent and subsequent team success. After falling six points short of ultimate footballing glory in last year’s grand final, the Oakleigh Chargers will be looking to go one better in this year’s NAB League decider.

Along with the likely first two picks in this year’s draft, Noah Anderson and Matt Rowell, 2019 co-captain Trent Bianco is one of a handful of Oakleigh top-agers set to feature in a second-straight grand final on Saturday. While last year’s loss “adds a little bit of extra motivation” for Bianco, he insists his Chargers are not lacking any as they look to rectify the 2018 result.

“Losing by a kick, six points or whatever it was, it still hurts us to this day and we definitely don’t want that to happen again. “It’ll definitely be in the back of our minds but it won’t change too much. “It’s just another game, it sounds like a cliché but it’s just another game and we just want to attack it just like we normally do.”

Chargers coach Leigh Clarke is another who has been here before, remaining at the helm for another Oakleigh lunge for the flag. Speaking of expectations heading into the “final test” for his side, he says success on the big day will go towards the legacy of each player he leads.

“I guess it’s like any final, the expectations rise a little bit and Eastern will understand as well that equally as much as we do,” he said.

“The prize on the line is something we want the boys to share… we talk about it quite often and they get to share that for the rest of their lives – that they’ll never be forgotten at our club if they win a premiership.”

The high stakes that come with a grand final adds another element to how individuals react within a team. Despite boasting a high amount of top-end talent when compared to Eastern’s vast team spread, Clarke maintains selflessness is what will get his side over the line in the big moments.

“An interesting part of the week is you get to see the boys under high game expectation… and see how they react to it. “The boys (who) want to peruse the pathway into the AFL, they need to be able to understand rising to the occasion. “We talk often about it might not be your day but you can always have your moment, so we’ll be expecting our boys to, if it’s not their day, sacrifice to help someone else have their moment as well.”

The different dynamics between the two sides set to meet on Saturday is as interesting a juxtaposition as the NAB League has ever seen, with Oakleigh boasting almost a dozen Vic Metro squad members to Eastern’s handful, while also having six national combine invitees to the Ranges’ nil. While the Eastern line-up has undergone a raft of changes since their last meeting with the Chargers, Oakleigh’s experience of shuffling the deck each week has been a test.

“We’re obviously in a little bit of a different position to Eastern,” Bianco said.

“We’ve got a few more boys (going) in and out every week so it’s a bit hard to in the middle of the year just to stay consistent but I think we’ve done a good job towards the middle and back-end of the year.”

Bianco’s descriptor of a “good job” is somewhat of an understatement, with the Chargers coming in off a massive run of seven wins, as well as 11 in their past 12 outings. The skipper is just pleased to see his side’s consistency.

“We’ve been playing some consistent footy and obviously we played patches we’re not happy with but it’s just putting through that consistent four-quarter effort,” he said.

“We’re playing some good footy so it’s good that in the back-end of the year, this is when it all starts mattering more so we’re in the best situation.”

While the team focus remains at the forefront for Bianco, he conceded there are a few players in his side that may well grab all the attention, including 2018 grand final MVP, Rowell.

“We’ve obviously got some high-end talent but we like to think we’ve played pretty consistent players throughout the whole team.

“We’ve got Matty Rowell and Noah Anderson up the top there so they’re pretty handy players and we’ve got the likes of Nick Bryan, we’ve got a fair few bottom-agers like Jamarra (Ugle-Hagan), Reef McInnes, Will Phillips, who is someone to look out for next year… (they’re) putting in just as much as the top-agers this year so they’ve been really handy and hopefully they can bring it (for) one more game.”

One of those bottom-agers, Ugle-Hagan, has formed a formidable key forward partnership with over-ager Cooper Sharman in the back-end of the season, giving elite kicks like Bianco a target to kick at.

“It’s just good knowing they can make a bad kick look good sometimes so if you put it out into their space and to their advantage side they’re more than likely going to do something with it,” Bianco said.

“(But) it’s not just them, it’s the small forwards and the medium-type forwards that we have in our team as well that help us be successful.”

Oakleigh’s tilt at success begins at 1:05pm at Ikon Park on Saturday, with the game set to be broadcasted live on Fox Footy.