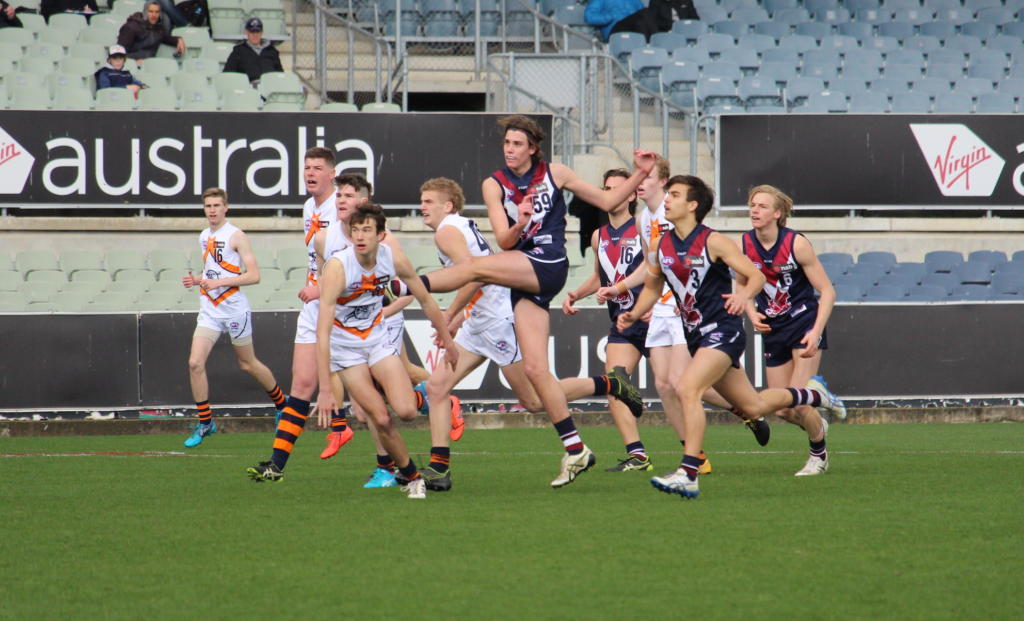 AS the NAB League grand final approaches, we take a look at the sides that are no longer in contention for the title; checking out their draft prospects, Best and Fairest (BnF) chances, 2020 Draft Crop and a final word on their season. The next side we look at is the Sandringham Dragons.

The dynamic forward/wingman has improved out of sight to become a genuine first round bolter. A player with real x-factor, Bergman has strong hands in the air, an explosive vertical leap and the ability to find the goals from range. His game-defining mark in the Herald Sun Shield grand final will also stick in the minds of recruiters as part of a strong back end of the year.

The versatile tall has been touted for a while now, and lived up to expectations in his top-age year to be named All Australian centre half-back. While he was enormous as an intercepting type in Vic Metro’s back six, McAsey also showed his ability to make a difference in the forward half in his games for Sandringham. Will be favourite to be the first Dragon taken on draft night.

Maginness has shot into first round contention on the back of a bed of high quality performances for both Sandringham and Vic Metro. His clearance winning ability and strong hands are terrific, as is his knack of finding the goals when moving forward. As a father-son prospect tied to Hawthorn, Maginness may slide a bit on draft night but has some fantastic traits for an inside midfielder.

A genuine utility, Worrell adapted his prowess as an intercept and rebound defender to become the unlikely leading goal kicker for Vic Metro this year. His reading of the play, overhead marking and effective kick are all traits that make him a smoky for the top 10, but injury has sidelined him in the back end of the season.

Where do we start? The Dragons have unprecedented numbers in terms of representative squad members and combine invitees (18), making their talent across the board hard to miss. Midfield/forward types Jack Mahony and Hugo Ralphsmith look the next best of the lot, while skipper Ryan Byrnes has put his hand up with a brilliantly consistent season from midfield, with Louis Butler a constant in defence and Oscar Lewis and Darcy Chirgwin showing signs around the ground. The raw raft of Sandringham talls should also feature, with the likes of Jack Bell, Corey Watts, Andrew Courtney, and Charlie Dean all garnering combine invites. The list goes on, so expect Dragons to litter the draft board.

Byrnes seems the obvious choice given his consistency and prominence when a raft of other key names were out of the side during the school football season and national carnival. Butler is another to have performed well across each game at either end of the season, while Jackson Voss enjoyed a purple patch in the middle of the year, over-ager Angus Hanrahan was undeniable when available and Kyle Yorke was one to have garnered attention for his performances. Count out 2018 best and fairest Corey Watts at your own peril, as well as the bottom-age talent looking to match his feat in Jake Bowey.

While matching their 2019 haul will be a tough ask, Sandringham is set to have another strong cohort with some exciting types having already made their mark. The clean and classy Bowey looks to be leading the lot on the back of his reliability on the wing, while Archie Perkins is a player with enormous scope, set for more midfield time next year alongside Darby Hipwell. Up forward, Ollie Lord looks a leading candidate to follow on from this year’s batch, already showing some aerial prowess.

The Dragons’ ability to adapt to the mass changes they face each week is so impressive and was a feature of their season once again. They looked to be an early premiership favourite as they toppled Oakleigh in Round 3, but had to overcome some mid-season hurdles to recover and finish fourth. In the end, they could not quite get it done often enough against the two grand finalists, with another three losses to Oakleigh going alongside a hat-trick of losses to Eastern. Still, the Dragons are well poised to have the biggest haul of drafted players among each NAB League side.