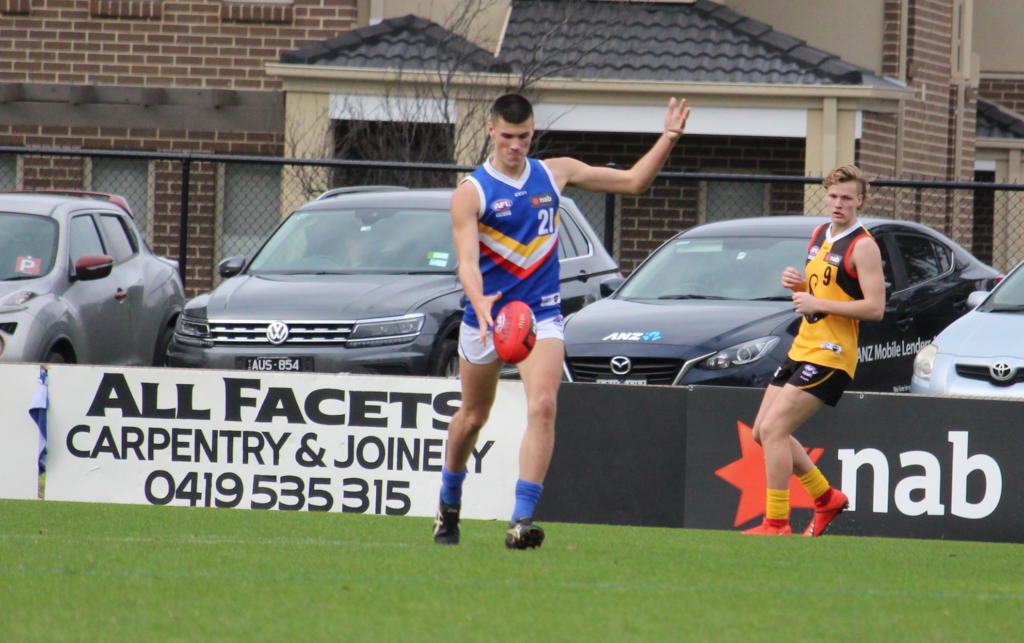 WHEN asked about which players those tuning in should look out for in this week’s NAB League grand final, Eastern Ranges captain James Ross‘ response suited his team to a t.

“I reckon we’ve got 23 good players you can look out for,” Ross said tongue-in-cheek at the NAB League grand final press conference. “You see the ones that always have the high disposals but it’s more the impact some of our players have, whether they have high disposals or not. “We’ve got the midfielders Lachie Stapleton, Zak Pretty, and Mitch Mellis, we’ve got the backmen in Joel Nathan and Chayce Black who’s moved down there, and the forwards with Jamieson Rossiter and Billy McCormack. “We’ve just got really good even spread across the ground so you can look everywhere really.”

The Ranges’ even spread, not boasting the fawned-over talent of their top four opposition, has helped them overcome every NAB League team this season on their way to a minor premiership – except for their weekend opponents, the Oakleigh Chargers. The sides met in Rounds 1 and 14 with Eastern going down both times but improving massively over the two games, and coach Darren Bewick says his side is not shying away from the challenge.

“I don’t think we’re going to shy away from the fact that Oakleigh are a really good team,” he said. “It’s probably why they’ve beaten us twice during the year but we’re pretty confident that if we come with the right attitude and good intensity – and that’s what you expect in a final – it’s going to be a ripping game and you’re going to have some really high-quality individuals playing.”

While the team’s success has been no “surprise” to Bewick and those around the club, the lack of recognition for the Ranges’ key players in Vic Metro representation and national combine invites has had that effect.

“We feel we’ve got a really good group, no matter their footballing ability,” he said. “They’ve bought into everything we’ve done and we were surprised, probably we were the only ones surprised, we didn’t get any (national) combine invitees. “We think we’ve got some really quality players, they get to show off on a bigger stage (on Saturday) and then we have seven or eight of them going to a state combine. “Our group is talented, we don’t get recognition that we think we deserve but that’s fine by us.”

The Ranges’ steep rise to a grand final appearance has been a couple of years in the making, and comes off the back of a two-win 2018 season. Bewick’s ploy to blood bottom-agers during that year has now paid dividends, with the ultimate return up for grabs on Saturday.

“It’s a fantastic opportunity, of course, and it’s probably a couple of years in building,” Bewick said. “We played a lot of bottom-age boys last year (who are) now our senior players and they really understand what the competition’s about – the intensity and the level that they need to get to. “So it’s been a great learning (experience) for them over the last 24 months and we’re really happy with what they’ve been able to demonstrate and they get an opportunity to do that on the weekend against a very good team.”

The opportunity is one Bewick appreciates does not come around very often, helping his side to take on the “just another game” adage.

“For some of them it’s going to be the biggest game of their career so why not give yourself the best chance of shining on that big day,” Bewick said. “I say it all the time; they’ll walk out, there’ll be four posts at one end and four at the other and they’ll have a really good opposition against them for 110 minutes… we’ve got to put our best foot forward and that’s why we try and keep everything as normal as possible during the week so then the players have got an opportunity to perform at their best. “They’ve done that for the majority of the weeks during the year and I’m confident that they’ll display that again on the weekend.”

The skipper is taking on a similar approach, both in an individual and team sense.

“We’re keeping (preparation) the same,” Ross said. “There’s not a lot we can change really, we’ve done the right things throughout the whole year and it’s just another game, just a lot more on the line I guess. “Joel (Nathan) will probably start full back and I’ll start up higher like we usually do… we work really well together and we won’t change anything this week, we’ll defend how works best for us.”

The opportunity itself is something Ross is looking forward to, leading his side out in their final game together in no better fashion – on the biggest stage of them all.

“One of the biggest honours I’ve had was to even captain a regular season game, going into the grand final I couldn’t imagine anything better,” Ross said. “We’ve got a great group of boys behind me that help me lead, they just make my job real easy and they’ll do the same on the weekend, too.”

The first bounce of the NAB League grand final goes down at 1:05pm at Ikon Park on Saturday, and will be broadcasted live on Fox Footy.