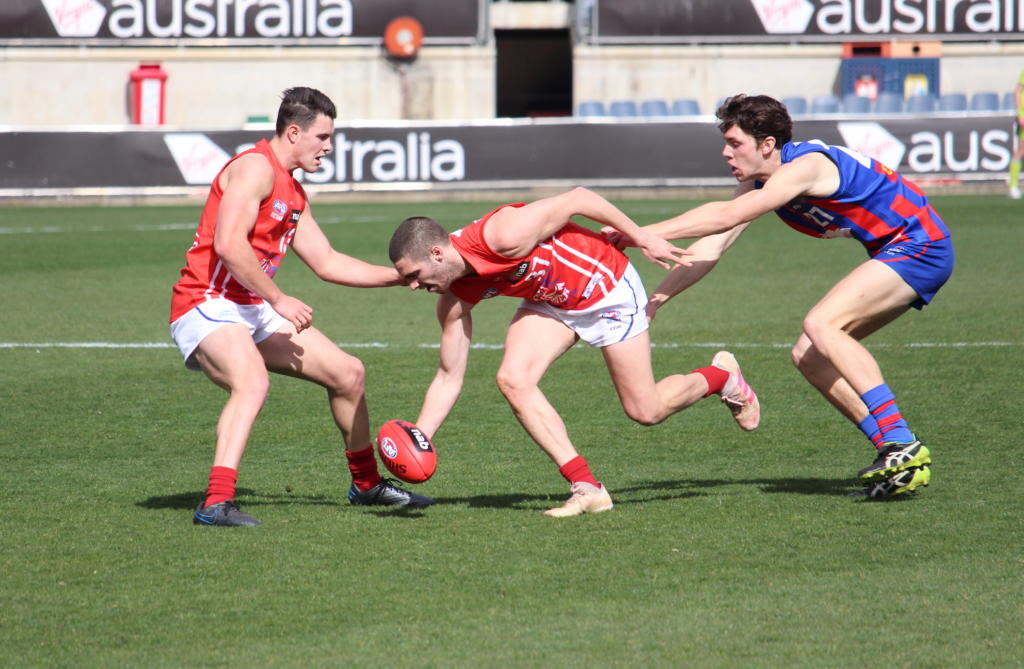 THE Eastern Ranges and Oakleigh Chargers won through to the 2019 NAB League grand final on Saturday after impressive wins at Princes Park. In this week’s edition of Caught the Eye, we highlight two key performers from all four sides who garnered combine invites or are prominent bottom-agers. For extended profiles on each player, click on their names highlighted in red, and for our full scouting notes, click here.

Our scouts said: “Bryan had one of his better games for the year… His hitout work again was great, often giving his midfielders first use.” – Ed Pascoe

Verdict: Was touted earlier in the year as having the potential to rise as the number one tall in this year’s crop. While that has not quite eventuated for Bryan, he again showed on the weekend a glimpse of his high upside and impressive athleticism for a ruck. It was his best game in terms of disposal output (15) and his ruck craft is already sound, so he should have no trouble finding a home come draft time given his future scope.

Our scouts said: “Schreiber enhanced his draft stocks with an eye catching display on the wing, winning plenty of the ball and showcasing his ability to hit targets with his trusty left foot.” – Ed Pascoe

Verdict: One who was a slight surprise to some as a state combine invitee, Schreiber has taken strides towards alleviating any doubts around his talent over the last few weeks. His game on the weekend was one of his best for the year, flying well for intercept marks and using the ball well by foot. He has good traits as a solid two-way mover and is a decent size, making him desirable as it is, and he just always seemed likely in possession against Sandringham.

Our scouts said: “This guy is a really exciting talent… the eye catching AFL attributes continued to emerge as the day went on… You can add courage to his list of qualities too, as he threw himself with the flight of the ball to impact an aerial contest late in the day, despite his side being done and dusted.” – Craig Byrnes

Verdict: Bergman just keeps on impressing and left a timely reminder of his talent for recruiters in his final Under 18 game. He may not always be the best player afield across the whole game or impress on the stat sheet, but Bergman is so often a match-winner. His overhead marking is top notch and he continues to find the goals with his booming kick, putting him right in the first round mix come draft night. Do not be surprised to see a keen side snap him up with a pick among the first dozen.

Our scouts said: “His ball use was much better, picking out safe options in the corridor and down the line. He spent more time in the midfield as time went on, winning a couple of excellent ground balls in the final term.” – Craig Byrnes

Verdict: The impressive thing about Butler’s game here was his ability to bounce back from a couple of disappointing moments both with and without the ball. His strengths are obvious and useful in any side, able to impact a raft of contests and break the lines out of defence, often finishing with a smart kick. Rebounding half-backs are commonplace, but Butler’s competitiveness and scope to move into the midfield help as points of difference for the national combine invitee.

Our scouts said: “It was another typical game from Stapleton, showcasing his hard edge at the contest in winning the contested ball and tackling hard to once again be an important cog in the Eastern Ranges midfield.” – Ed Pascoe

Verdict: Stapleton’s form has been impossible to ignore, consistently finding the ball and being able to compete against bigger top-end midfielders. The ultimate test for him will come against the likes of Noah Anderson and Matt Rowell in the grand final, but you would back in the ferocious ball winner to hold his own once again. His two-way work rate, reliability, and handling of the big moments all bode well for some attention come draft time.

Our scouts said: “The young defender Parker was cool, calm and collected with his ball use a real feature coming out of defence. Often tasked with the kickouts, his ability to sum up his options and hit a target was superb.” – Ed Pascoe

Verdict: Parker has been a consistent feature in the Ranges back six, able to accumulate high numbers and relieve his defence of any pressure. His kicking is the most obvious strength at this point, with the bottom-ager finding targets at will and taking on the responsibility of being a designated Eastern kicker from the back half. Looks a promising type, but will need to put together games like his one on the weekend more consistently.

Our scouts said: “Sparkes has had some great games throughout 2019, but I feel Saturday’s effort was one of his best for the season. Starting on the wing, he ran hard up and down the ground to provide a target or impact any contest he could.” – Craig Byrnes

Verdict: As has been somewhat of a theme, Sparkes saved one of his better games for the year for his side’s most important outing. His match-up against Eastern’s Connor Downie was touted as an important one coming into the clash, and the outside mover did not disappoint with his breaking of the lines in the highly contested game. It will be touch and go in terms of his draft hopes, but he is one who can impress at the combines.

Our scouts said: “Another outstanding final by the thick set defender, who has come to life and given recruiters (particularly Hawthorn) a bit to ponder over the coming months.” – Craig Byrnes

Verdict: Pepper is the kind of player coaches and teammates love to have, and he once again stepped up at crunch time. His combativeness worked well in defence in this game, cutting off a wealth of Eastern entires and pushing the ball out of danger with his bustling runs. His versatility as a medium-small is something clubs will like, but Hawthorn is set to have the final say as he is tied to them as an NGA product.