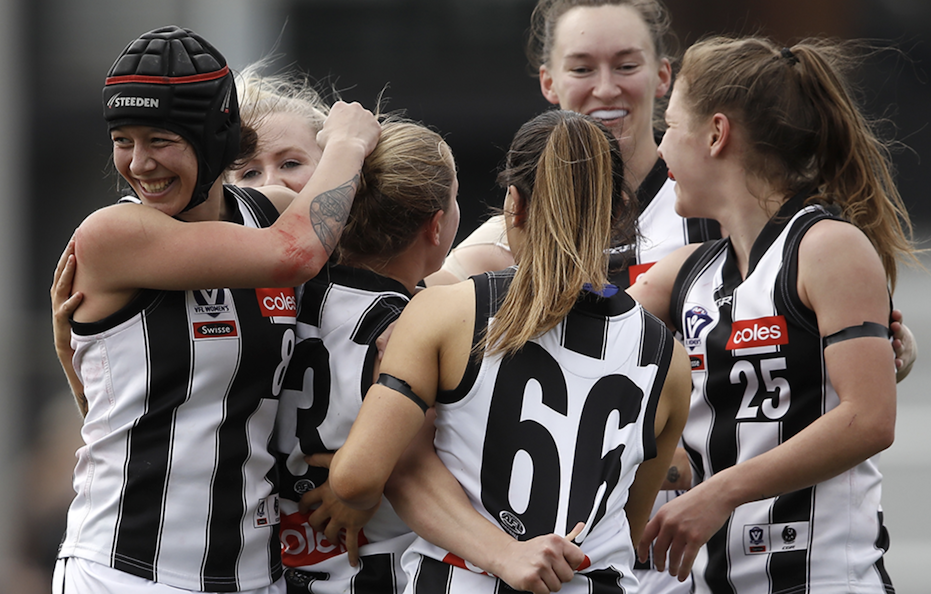 A FEROCIOUS Collingwood Magpies swooped into the 2019 Victorian Football League Women’s (VFLW) Grand Final producing a scintillating lesson in forward pressure. The Magpies knocked off the Southern Saints for the second time in three weeks as they advanced to play the Western Bulldogs in next Sunday’s decider. In a tight contest that was see-sawing at times, the Magpies held form in the final term to kick two of the last three goals of the game to run out 7.5 (47) to 5.3 (33) winners. While the Saints’ defence was up to the task, they were ultimately overwhelmed in the end as the Magpies piled on 27 more inside 50s, 19 more tackles and 35 more disposals to send an ominous sign to their opponent next week.

It was the Southern Saints who were first on the board, keen to atone for the loss to the Magpies a fortnight prior, with former Blue, Kate Shierlaw putting through a major just 54 seconds into the contest. Her major was soon equaled out by Katelyn Lee, but again the Saints struck back midway through the term thanks to recent recruit, Caitlin Greiser who extended the margin to eight. A crucial goal to Oakleigh Chargers’ graduate Nicola Xenos got the Magpies up and about with the margin eventually cut to one by the first break. Bri Davey‘s return in the black and white after injury was proving to be a huge factor through the midfield, while up forward, competition leading goalkicker Jaimee Lambert was about to get to work. She booted two goals in 15 minutes, joined by slick Chargers’ utility Gemma Lagioia who added a major in between Lambert’s goals to extend the lead out to 17, which would be the largest of the match. With the momentum fully with the Magpies, former Pie, Darcy Guttridge booted a much-needed major on the edge of half-time for her side to head into the break with a more manageable 11-point deficit.

Neither side could seem to break through in the third term, with it taking a late goal from Emma Mackie to bring the game back to life heading into the final break. The Magpies lead by just five points at the final change, and with the Saints having booted the last two, needed someone to stand up early. That someone was AFL Women’s Rising Star winner, Chloe Molloy who made the most of an opportunity to give the Magpies breathing space, but no sooner had she done that and Southern Saints’ Molly McDonald brought the margin back to a straight kick two minutes later. It would prove to be the last score for the Saints however, as some desperate defending by their back end forced a couple of rushed behinds. The pressure from the Magpies was intense and eventually it won the game, with a fitting goal to Lambert putting the margin out to a match-winning 14 points surging them into the grand final.

Collingwood faces Western Bulldogs at Ikon Park on Sunday from 11.35am.