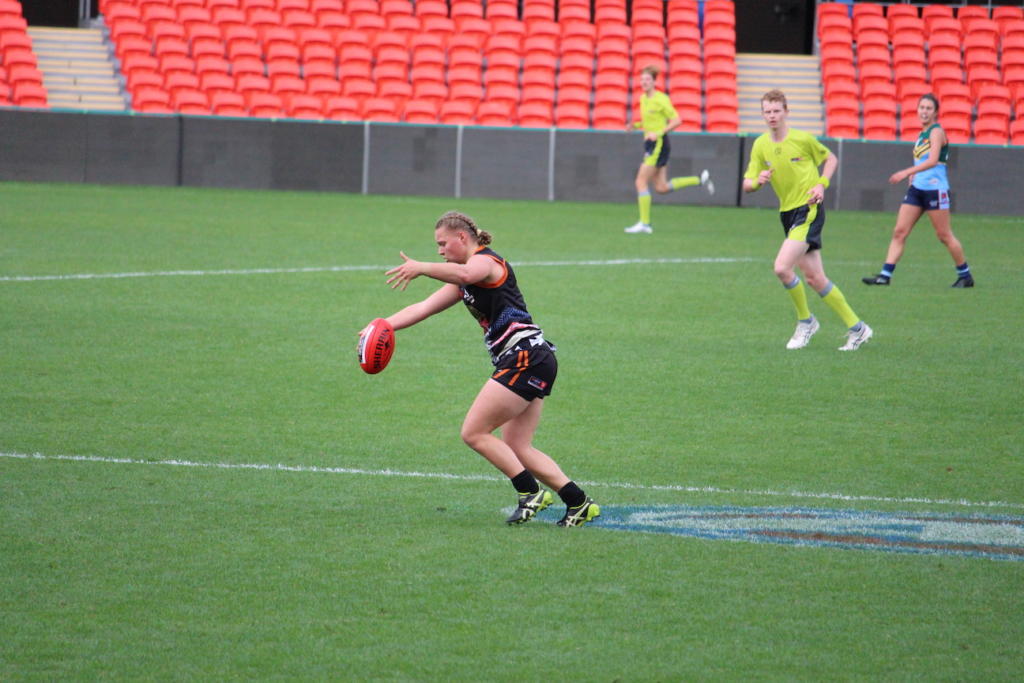 “It was full-on last year with school and everything,” Tabb said. “I quit basketball so I could take up football and with going to the AFL Academy and all that and then trying to have the opportunity to train with the Crows a few times a week, it got heaps. “This year I just said no to winter and just stick to SANFL and focus on state.”

The Eagles youngster crossed to Woodville-West Torrens over the off-season due to the side entering the SANFL Women’s for the first time. But her football journey started prior when she was asked if she wanted to join in a nine-a-side association game.

“I’m from Windsor Bay which is about two and a half hours out from Adelaide and so I grew up playing basketball, netball and all those sports because football wasn’t an option down there,” Tabb said. “Then my brothers’ physio said there was an association game and said ‘do you want to just come join?’ and I said ‘oh yeah’ because I’d done nine-a-side with school and everything and I was like ‘oh yeah I will’. “So we did nine-a-side for that competition and got best on for the day, and I was like ‘I’m pretty good at this’ so I looked at a few clubs and West Adelaide was the closest because Eagles wasn’t an option in 2015 when I started. “So I went to Westies and did two years there, one year of SANFL in 2018, so last year. “Then went to Fitzroy for the winter season and then moved to Woodville-West Torrens for this SANFL season.”

The Eagles entering the league was a brand new experience for Tabb, who thoroughly enjoyed it and the bond she had with the playing group which outweighed the cons of the winless season.

“For me, I got to choose between Westies and Woodville, but because I’m zoned to Woodville I thought I might as well have the opportunity to go there while Tess Baxter‘s coaching,” Tabb said. “I love it, all the bunch of girls were amazing. “Even though none of them played SANFL before, it was just a great opportunity to play with a different group of girls and build a culture that will last for the next few years.”

Tabb has a fierce attack on the ball and a unique combination of power and speed that catches the eye on the football field. While her kicking is a self-proclaimed area of improvement, Tabb did enough during the Under-18 Championships to earn a National Draft Combination. Now the tackling machine will look to show off her speed at the three-day event in October. Speaking of the championships, Tabb said the bond between the Central Allies players was really strong and everyone had embraced the chance to join together once again up on the Gold Coast.

“Everyone has bonded extremely well, which I think we’ve all loved,” Tabb said. “Last night (July 10) we were all in a group circle singing, it was just so good. “Everyone has embraced the opportunity and you can see on the field we’re enjoying our footy which is good.”

As a player who has grown up through the Adelaide Crows’ Academy, Tabb has a mentor who has been a clear role model for her on and off the field.

“Chelsea Randall has helped me heaps though the Crows Academies,” Tabb said. “Given how she goes and plays on the field, but she goes and gives opportunities to others, not only in the country but all around the world has inspired me as well.”