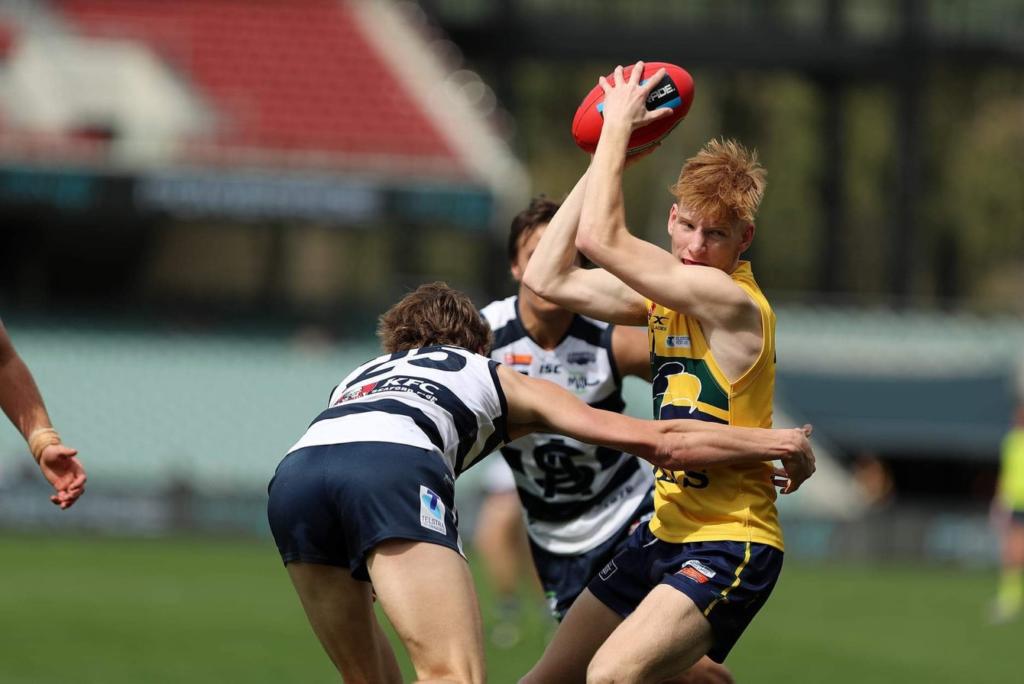 Woodville-West Torrens completed a dominant SANFL Under 18s season with a commanding 23-point win over South Adelaide at Adelaide Oval on the weekend. The Panthers started strongly to boot the first two goals of the game within three and a half minutes, but then the Eagles piled on five goals to one to end the term with a 13-point quarter time break. It was much of the same in the second term as the Eagles added three goals to one and blew the margin out to 28 points with danger signs beginning to show for the Panthers. After a slow start to the third term, South piled on three consecutive goals to 10 points nearing the end of the quarter, before a couple of crucial majors to the Eagles put the margin back out to 22. Daniel Sladojevic stepped up with two last quarter goals for the Panthers, but could not bridge the gap greater than 15 points as the Eagles held firm to run out 12.11 (83) to 9.6 (60) winners. Michael Frederick picked up 21 disposals and had nine marks (three contested), nine inside 50s and one goal to win the Alan Stewart Medal for best on ground, while Luke Barnett had 20 touches, two marks, five clearances, three inside 50s and two rebounds. Bottom-age talents Lachlan Jones (18 disposals, four marks and eight rebounds) and Taj Schofield (18 disposals, three marks, five tackles and three inside 50s) were also impressive, while Zane Williams and Josh Morris combined for five goals in the victory. Henry Smith worked hard throughout the contest with 18 hitouts from 13 touches, four marks, three clearances and a goal. For the Panthers, Zac Dumesny had 21 disposals, five marks, three clearances, three inside 50s and four rebounds, while Jason Horne booted a goal from 17 touches, seven clearances and seven tackles. Sladojevic and Beau McCreery both booted multiple goals with two apiece, while Damon Freitag was dominant in the ruck on his way to 36 hitouts from 11 touches, two marks, three clearances and three tackles.

Glenelg has bounced back from its agonisingly close loss to Port Adelaide to secure victory over Adelaide and earn a second crack at the Magpies in the decider. The Tigers were dominant from the first bounce, piling on four consecutive goals to open the game, before the Crows hit back with two of their own to cut the quarter time deficit to 13 points. Glenelg extended its lead to 17 points midway through the second term, making the most of their two scoring opportunities with 2.0 to Adelaide’s 1.4. The Crows soon found their range though, remarkably piling on four consecutive goals to hit the front by eight points at the main break. Glenelg drew level nine minutes into the third term, but a quick answer from Paul Hunter saw the Crows regain a six point advantage. From there it was all Glenelg as the Tigers slammed home five goals to end the term and the first three of the final quarter to blow out the margin to 34 points and all but secure the victory. The teams went goal-for-goal from then, but it was too little too late as Luke Reynolds had a day out with five majors, while Liam McBean booted four of his own with the two forwards dominating everything up front. Margarey Medallist Luke Partington did not let his win get in the way of team success, racking up 28 touches, three marks, eight tackles, five inside 50s and a goal in the Tigers’ victory. Bradley Agnew (27 disposals, eight clearances, 10 tackles and four inside 50s) and Andrew Bradley (23 disposals, five marks, four clearances and two rebounds) were also prolific, while top draft prospect Will Gould had 10 rebounds and four marks to go with his 19 touches in defence. For the Crows, it was Patrick Wilson who found plenty of the pill with 29 touches, four marks, seven clearances, three rebounds, two inside 50s and three tackles, while Lachlan Sholl was also impressive with 24 disposals, three marks, three inside 50s and two rebounds. Hunter was hard working in the ruck with 24 hitouts and five tackles, while Ned McHenry laid seven tackles from 18 touches and five marks in defeat.

A dominant start from Woodville-West Torrens gave the Eagles a chance at premiership glory, turning the tables on Sturt, the side that beat them a fortnight ago. The Eagles booted four opening quarter goals, and the first five of the match with the Double Blues adding just four behinds in that time. Sturt got back into the contest with five of the next six goals of the game, with James Richards and Thomas Condon both booting two majors, drawing within a point of the Eagles at the 19-minute mark of the third term. The catch-up was all the Double Blues had left however, as Jake Weidemann and Harrison Morgan went on a goal scoring spree, piling on the next five goals, while South Australian Most Valuable Player (MVP) at the Under-18 Championships, Harry Schoenberg booted his second of the contest to end the contest with a 39-point lead. The Eagles were far from done however, with Casey Voss booting a consolation goal for Sturt before the Eagles added another couple of late ones to run away 46-point winners. Schoenberg was prominent in midfield with six clearances from 21 touches, two marks, three inside 50s and two goals, joined onball by Jackson Mead (19 touches, five inside 50s, two marks, three clearances and two rebounds), and Jack Gaffney (12 touches, five clearances and nine tackles). Jake Westbrook and Connor McLeod had a combined 33 disposals and 10 rebounds, while exciting forward Kysaiah Pickett booted 1.2, and Morgan and Weidemann combined for seven majors on the day. For the Double Blues, Edward Allen racked up 27 touches, five marks and seven clearances, one of Sturt’s big ball winners with Joel Thiele (26 touches, seven marks, four clearances, three inside 50s, four tackles and two rebounds) and Casey Voss (25 touches, seven marks, five tackles, eight inside 50s and a goal). Other South Australian Under-18 players who stood up were Josh Shute (18 touches, four marks and four inside 50s) and Oliver Grivell (17 disposals, six marks, four rebounds and three tackles).