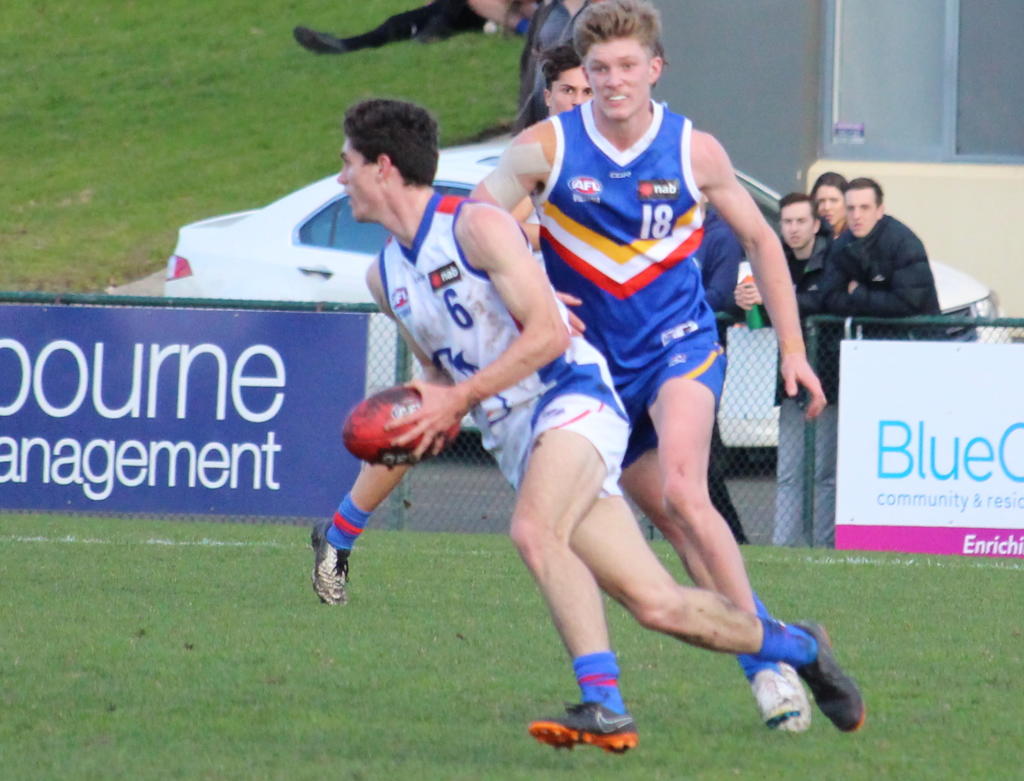 WITH the NAB League Boys Grand Final ahead on Saturday, we start the week pondering five questions that are keys to deciding who wins the 2019 premiership.

1 Can Eastern contain Matt Rowell and Noah Anderson in the midfield?

It is remarkable to think that one of the grand final sides holds the two top picks in this year’s draft, while the other (very unluckily in our opinion) did not receive a single player with a National Draft Combine invitation. While many midfields go head-to-head with the Oakleigh brigade, Eastern is likely to deploy a strong team attitude with the likes of Zak Pretty, Mitch Mellis and Lachlan Stapleton rotating off Rowell, with Anderson’s size being a bit more tricky to handle. Jamieson Rossiter has been doing wonders up forward, but can play through the midfield and he has the size and strength to potentially match Anderson in this regard.

2 Are James Ross and Joel Nathan the best cohesive defensive duo in the competition?

The Eastern Ranges captain and key defensive partner, Joel Nathan might not have the combine invitations that some other combinations have, but they would be up there with the best defensive duo in the NAB League. They work well together with Ross pushing up from half-back to intercept forward entries, and Nathan capable to not panic under pressure deep in defence. More than a few times the duo has saved the Ranges and stopped certain goals, along with the entire back six. Defence wins premierships as the saying goes, and these two are as consistent as they come, particularly in the air working in cohesion.

3 How does Eastern win this game?

Many might immediately think the key is trying to nullify Rowell and Anderson, but at the end of the day, they are the consistent players that are going to get your 25-plus touches. The key is making sure that the majority of those are rushed at stoppages or in less dangerous areas. The key to stopping Oakleigh is restricting its run, so making sure Trent Bianco is accountable is the number one priority. With his elite kicking skills and run-and-carry, if you let him do as he pleases on the outside, he will do all the damage. On the weekend, it was Bianco often putting in bullet passes to forwards and he would be the first player in the Oakleigh side to watch out for because of his hurt factor by foot and ability to carry the ball in transition.

4 How does Oakleigh win this game?

They have so may talented players and you would expect they will likely get close to double-figure players drafted by the end of this year. Their midfield is as heralded as it gets, with stars across the park. They need to ensure that Jamarra Ugle-Hagan gets a clean run at it because Ross is so good at dropping off his man and cutting across a leading forward to clunk a grab or spoil to safety. Ugle-Hagan was afforded far too much space in the preliminary final and he is so quick off the lead, he is hard to stop once he gets going. So Oakleigh would be no doubt aware of Ross’ capabilities and at times might need to lower the eyes and see if potentially Ross’ opponent is getting to dangerous areas and take a ‘horses for courses’ approach when it comes to going inside 50 and picking a target on its merits and not being too predictable.

How much does losing last year’s grand final have an impact on the Chargers?

For most of the players, quite a bit. Rowell won best on ground last year in a losing grand final and there was not much more he could have done as a bottom-ager. Fast forward 12 months and there would be a deep burning desire to make up for last year’s disappointment, so expect the number 11 to be fierce for four quarters. He along with Anderson, Bianco and co. will be keen to right last year’s wrongs and go out with a premiership to their names. Eastern know Oakleigh will bring the heat, it depends if weathering the storm and upping the ante as they have done all year will be enough to conquer the Chargers?