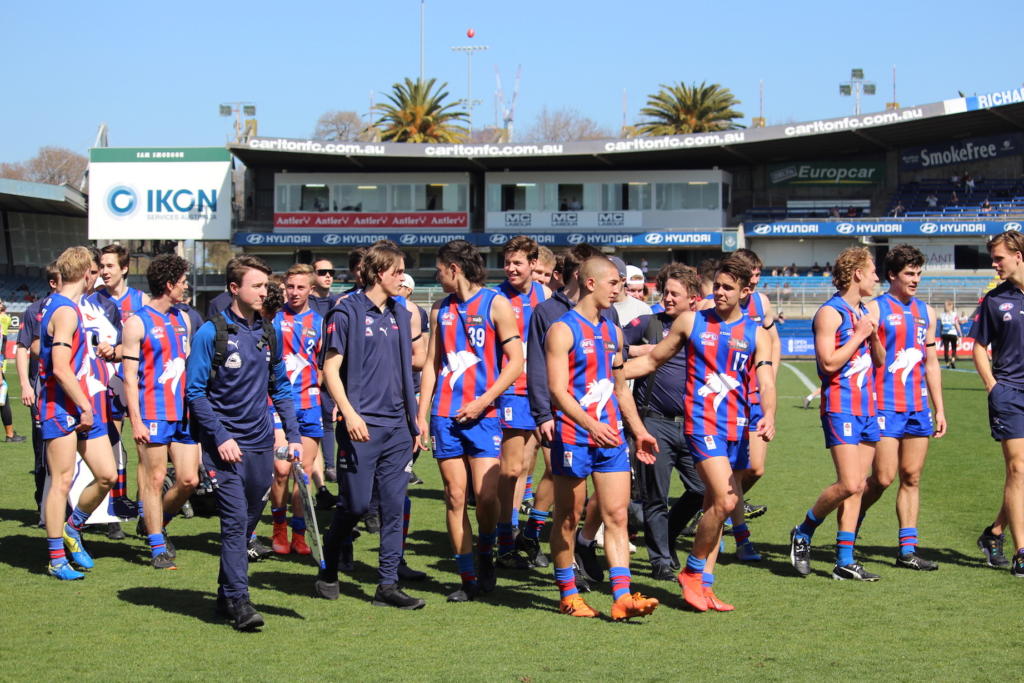 OAKLEIGH Chargers earned a second crack at premiership glory in as many years, trumping metro rivals Sandringham by 75 points at Princes Park.

The signs were ominous early as Jamarra Ugle-Hagan produced a mark on the lead and set shot goal typical of his form, backed by a Thomas Graham goal on the run shortly after – all within the first three minutes. But as expected, Sandringham hit back as Finn Maginness got on top at the stoppages. The Dragons even snatched the lead for the only time of the game after some improved finishing, with Kyle Yorke’s set shot sailing through. The Chargers hit back swiftly with one of their better passages forward of centre, with Noah Anderson and Trent Bianco combining to set up Ugle-Hagan’s second for the term, sealing the five-point quarter time lead.

The game began to open up as the Chargers quickly got on the board again on the back of a classy Finlay Macrae finish, and he had a say in Oakleigh’s third goal of the term with a nice baulk in the lead up to Graham’s second major. The momentum was halted momentarily as Yorke again found the big sticks with a deft dribbler over the back, but it was business as usual as Cooper Sharman got on the board with a reply and Graham roosted a huge set shot goal late on to give the Chargers an ominous 28-point half time lead.

Oakleigh again started the better in the third and broke out to a game-high lead in the back-end of the term, sparked by a couple of great moments from bottom-age forward Connor Stone. A goal to Hugo Ralphsmith on the back of a spearing Miles Bergman ball was the only form of resistance from the Dragons, as they could only stand and watch as Oakleigh put through another three goals to end the term 45 points to the good and with one foot in the grand final. With the game all but dead and buried, the Chargers added another four goals to the Dragons’ nil to see out the win in a heated final term, with state combine invitee Kaden Schreiber going in the book late on.

Matt Rowell led all-comers with a typically consistent 32 disposals, followed by Schreiber’s 28 and skipper Bianco’s 27. Will Phillips enjoyed his time through midfield with 26 touches, while Anderson was impactful with three goals from 21 disposals in a statement performance. In a dour day for the Dragons, Ryan Byrnes racked up 27 disposals in a trying effort, while Darcy Chirgwin and Maginness combined well early and Louis Butler was solid down back with Harry Loughnan.