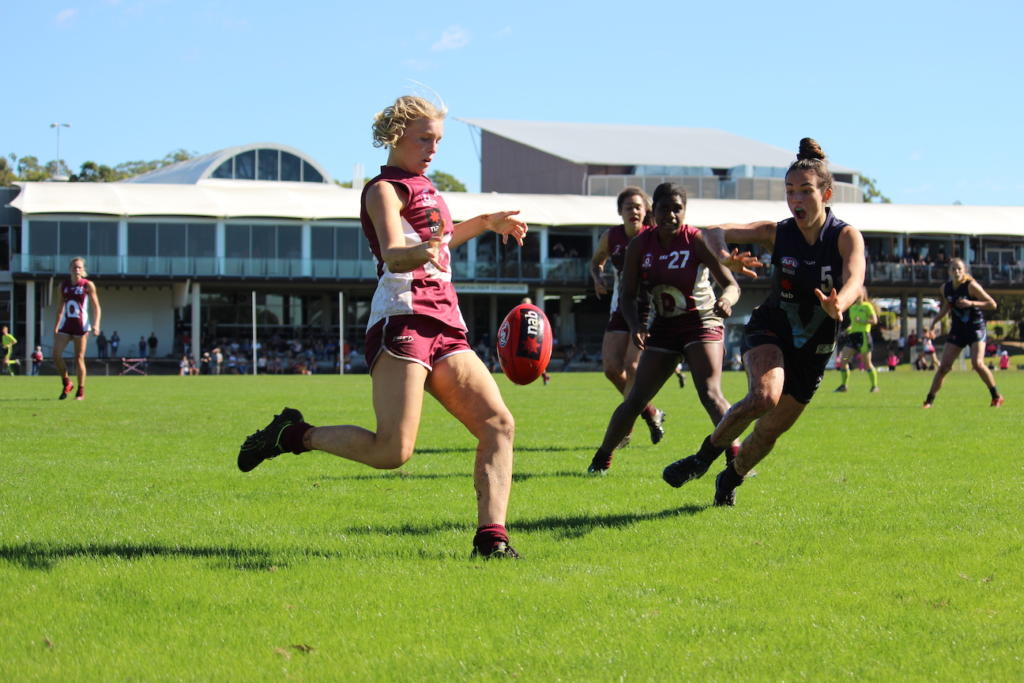 ORIGINALLY hailing from the rugby league heartland of Sydney, Serene Watson grew up trying her hand in multiple sporting codes. She was “born and bred” through rugby league, went on to find herself fouled out in her attempts at basketball, but found a true home for her competitive spirit on the football field. It has been a steady rise from her first experience with the oblong ball, since.

“(I love) the aggressiveness,” Watson said of Australian rules football. “I used to play basketball and I used to get called off for a lot of aggressive things so I was like ‘Oh, it’s a bit easier to do it on the footy field. “My brother started playing footy around 2010 when we first moved up (to Queensland) from Sydney… I just went and supported. “The girls (team) coach came up to me and asked me to play local footy and then from there it just went uphill, I started getting into rep teams and it just escalated from there.”

The Gold Coast SUNS Academy product has become a key member of those representative sides in her top-age year, donning the famous Maroon jumper in her adopted home state during July’s AFL Women’s Under-18 National Championships. Just pulling on the Queensland colours is something Watson said has been an “honour”, while doubling as an opportunity to showcase her strengths.

“You don’t really get to do it much and not many girls get to do it at all but it’s such an honour to represent Queensland, especially for AFL,” Watson said during the camp. “(The camp) has been really good, all the girls have bonded really well even though we (lost) I think the camp’s been really good and we’ve all enjoyed it.

“It’s different because there’s obviously Brisbane Lions Academy and SUNS Academy (players) so it’s harder to jell but I think we’re learning because we all know each other and we realise how we play now… it’s getting better and definitely getting easier.”

“(My strength is) my rebounding off the half-back because I’m a backline player… just getting the ball out if it comes in, that’s probably one of my biggest assets.”

Watson’s best was on full display in Queensland’s heavy Round 3 carnival loss to Vic Country, where she stood tall in an under-siege defence to collect a team-high 21 disposals and seven rebound 50s. Despite finding a home in the back six, her selection of idols hints at a move further afield.

“Patrick Cripps, just watching him play as a tall midfielder – that’s probably what I want to be like… he’s skilful and just such a talented player,” Watson said. “If not him, then probably someone like Leah Kaslar or Shannon Campbell from the Brisbane Lions… Leah and Shannon, they’re just insane. “They just go hard at the footy and still have skills so that’s why I look up to them.”

With her inspirations setting the bar high, in terms of aspirations, Watson’s ultimate goal is clear.

“I think for everyone it’s the AFL Women’s draft, but just getting something out of each camp and playing footy because you love it is probably the biggest thing,” Watson said.