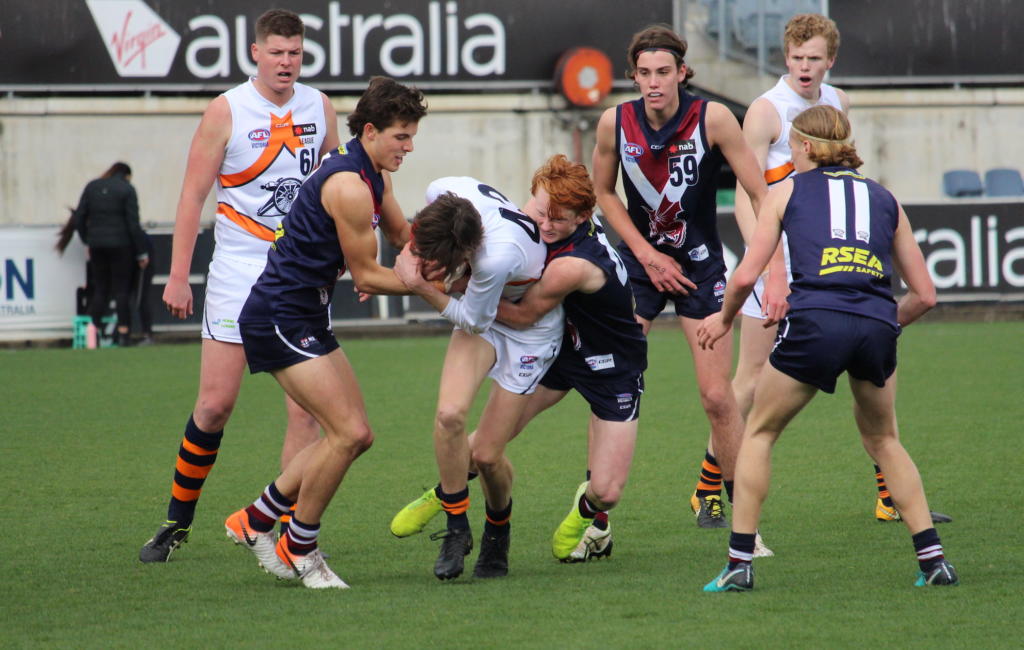 SANDRINGHAM and Gippsland won through to preliminary final week with comfortable wins in trying conditions at Princes Park on Saturday. With only the best of the best left, it was difficult to pick out this week’s Caught the Eye candidates, and we have gone for some less-heralded prospects. Each showed signs of why they earned combine invites, and you can find their extended profiles by clicking on their names highlighted in red. For full scouting notes on each player and more, click here.

Our scouts said: “Ralphsmith was the player to take the game away from Calder early… unstoppable both in the air and at ground level, taking some strong marks in the pack and on the lead and also swooping on the loose ball.” – Ed Pascoe

Verdict: Is a real game changer with his athletic base and skills around goal, proving as much in this game. His speed inside 50 made him a menace close to the big sticks, getting to a raft of contests and using his best instincts to snatch two of his goals from close range. Could have had an even bigger game if he had taken a couple of later chances and if teammates had turned around sooner, but reminded us of his sizeable upside as a forward mover.

Our scouts said: “Not a huge disposal game with just the 14, but his defensive work was very impressive. On a number of occasions he put his body on the line when he had to go and protected the ball drop zone, as well as applying shepherds and bumps when required.” – Peter Williams

Verdict: Is another late bloomer having only come into the Calder squad mid-season. Has hardly been a high disposal winner in his six NAB League outings with this week’s haul of 14 his best yet, but Gollant provides a good mix of outside skills and defensive acts on the wing. Obviously has something that club recruiters want to see more of given his state combine invite, so will be one to keep in the memory bank come draft time if he impresses in the athletic tests. Looks a clever type.

Our scouts said: “Connolly’s excellent form continued on Saturday as he again took the game on with great intent from the back half… baulking around opponents and cutting through the corridor with dare before generally executing a pinpoint pass.” – Craig Byrnes

Verdict: Has been impressive in the back end of the year after putting in a number of consistent games previously with much of Gippsland’s core absent. Connolly is really starting to shine with his use by foot on either side and is a player who can become a real metres-gained asset from the back half or further afield. He’s silky on the ball and his impact on this game among a stacked Gippsland line-up shows his worth, so keep an eye on the state combine invitee.

Our scouts said: “Was one of the best players on the ground, for either side. Starting at the centre bounces, Andrews was dynamic inside and out, providing an early match highlight by kicking a monster goal from outside 50 in the opening minutes.” – Craig Byrnes

Verdict: Capped off a strong over-age year with another great dual-sided performance from midfield. There is no questioning his inside capabilities now after it was queried last season, and Andrews stood up against some pretty stiff Gippsland opposition. He kept Sam Flanders quiet early on while finding his own ball with ease, ensuring he was relevant going both ways. Consistently getting those high numbers will be the next step, but it seems he has admirably done all he can to improve to this point.