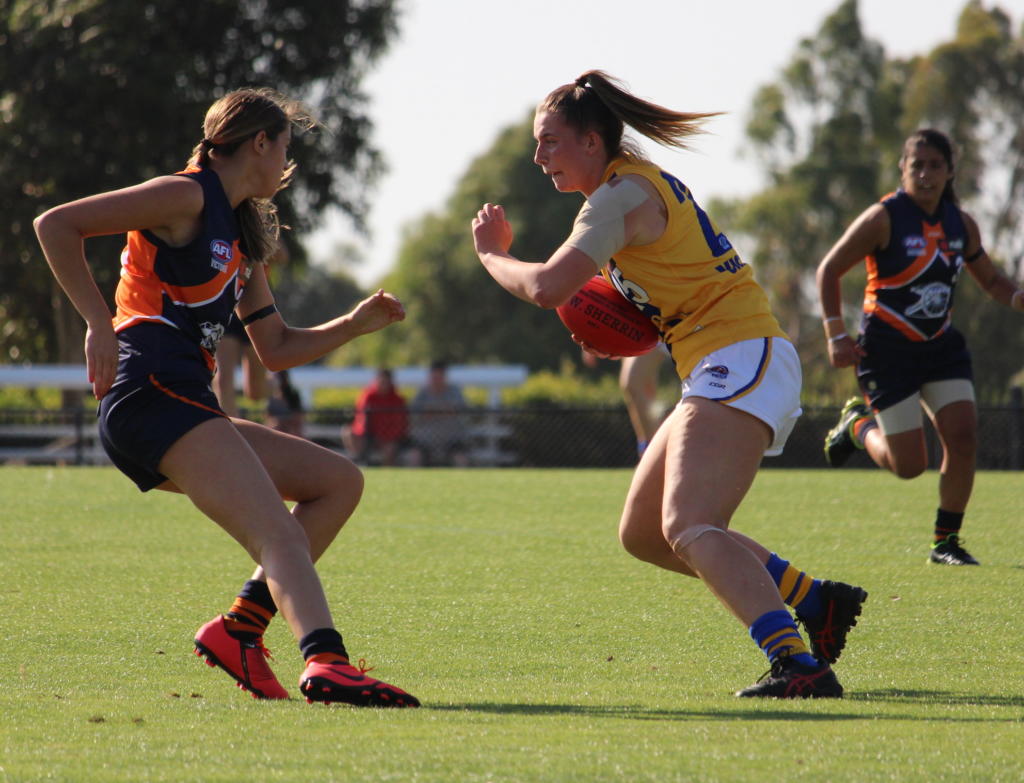 FOR Western Jets’ Cleo Saxon-Jones, the journey through to the big league has been a bumpy road with plenty of footy action along the way. Despite starting Auskick at a young age like a lot of other Aussie kids, she explored other sporting avenues before ultimately coming back to where it all began.

“I started off at Auskick around five or six when it was the starting age years,” Saxon-Jones said. “Then I went to about Grade 3 and 4, stopped and went to basketball and cricket and played that for a few years and nagged mum and dad for about two years to go back to footy. “They were like ‘oh no it’s too rough’ and then one of my mates from cricket came along and was like ‘come join my club’ so I was nagging mum and dad to join the under 18 girls and I was only 13 at the time then. From Year 8 onwards it was just a build up from there. “Started local and then I think I was invited to a few try-outs for Western Jets and Geelong when it was combined. Got here and then went through the various pathways.”

With a booming kick and height on her side, Saxon-Jones says her aerobic fitness is something she wants to improve on while a big focus is her ability to impact the contest.

The talented forward has now found herself playing with the Western Jets for a number of years in the NAB League and TAC Cup, progressing through to Vic Metro in the AFL Women’s Under-18 Championships in both 2018 and 2019 and now playing with Melbourne Uni in the VFL Women’s league.

“I started on the wing in my first year and then was used as a ruck mainly onwards from then,” Saxon-Jones aid. “The last two years I’ve ventured down forward as a full-forward and now playing my game more as a centre half-forward and trying to get a run through the midfield every now and again. “(Vic Metro) was very good. “It was a very high standard, very different to TAC/NAB League. “It was an honour to play with and against some of the best girls in the country and state.”

While playing for Victoria is a massive step in the right direction, Saxon-Jones is ultimately aiming for the AFL Women’s and is sure to push herself if given the opportunity.

“(I’ve dreamed of AFL) probably since I was little,” she said. “We used to go down to the VFL games with dad, used to go to the AFL games with him too. “Then watching them running around it was kind of like I want my time to be able to play. “It’s just gone on from there pretty much.”