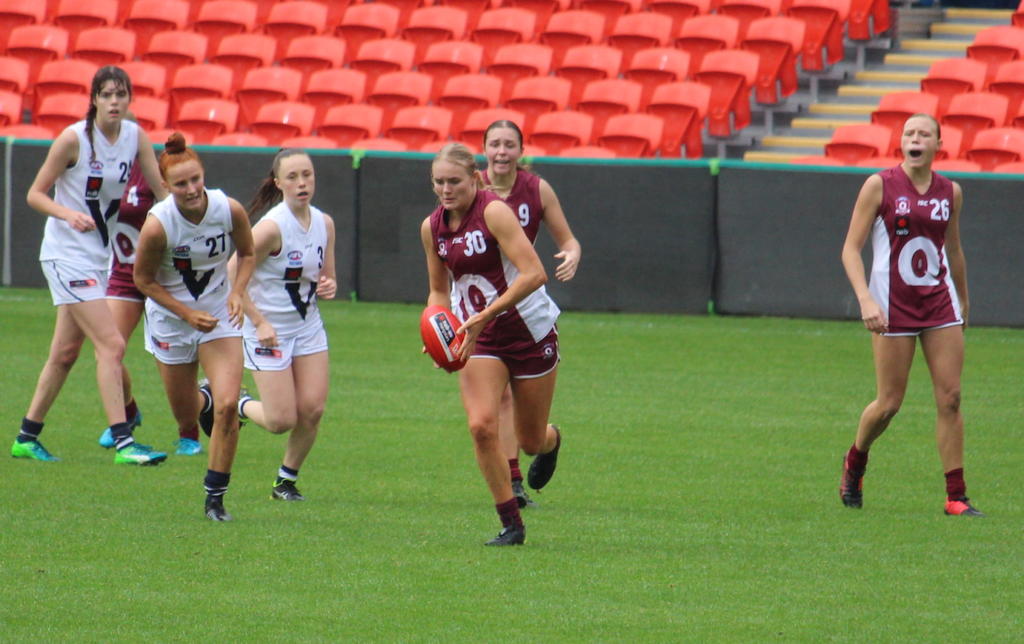 HAVING so many footballers in the family certainly helps. It is even more beneficial when one family member has reached the elite level of AFL Women’s football. For Queensland AFL Women’s Under-18 representative, Emmii-Lee Zanker-Close, she has been surrounded by footballers and always seemed destined to cross into the sport from her chosen code of netball growing up. That transition became all but certain when her cousin, Eden Zanker was drafted to Melbourne ahead of the 2018 AFL Women’s season.

“Definitely my mum and dad have always been very supportive,” Zanker-Close said. “But also my cousin Eden Zanker. “The pathways she’s taken definitely a different pathway to me, but just talking to her – she’s at the elite level and just seeing what the differences are like – having that extra support of someone who has been at the top level and know what it’s like is just awesome to have.”

So just exactly what is it like having a relative playing at the elite level?

“It’s really good, it’s kind of scary though because there’s always the expectations because it’s a family member, you’ve kind of got to live up to that but it pushes you harder I guess,” Zanker-Close said. “To try and reach that level and be with them.”

Zanker-Close was a late bloomer to football, not taking the plunge until halfway through high school. When she finally did get out on the park after choosing to chase her dream, the unthinkable happened.

“Footy’s always been a sport I’ve always wanted to play,” she said. “My dad played, my brother’s played, but I never really had the opportunity. “In Year 9 I started playing school footy, I was then drafted into the Sunset team, however after playing my first club game of footy, I did my ACL, and that was a massive step back so I missed my first year of footy technically.”

That injury caused plenty of frustration for Zanker-Close, having worked hard to get to her first competitive game, only to go down with a year-long injury. But despite many suggesting the sport might not have been for her or worth having a second crack, she decided to knuckle down and throw everything at a return.

“It sucked a lot,” Zanker-Close said. “I saw a lot of my friends making Queensland, travelling the state, it really upset me. “But it never crossed my mind to quit, like I always thought I’m going to play again. “So many people questioned ‘you’ve played one game, why would you want to keep playing after you hurt yourself so majorly?’ but it never even crossed my mind to quit. “I was always determined to play footy.”

While Zanker-Close has made it to state representative level, she still knows there is a long way to go, identifying both her strengths and areas of improvements for the future.

“I feel like my height is definitely an advantage, it helps me on my one-on-ones,” Zanker-Close said. “Especially playing in the backline, being able to out-body my [opponent], aim to spoil. “But things I want to improve on is looking to switch and just staying composed. “I’m really hard on myself, so just overcoming things a lot quicker and that’s about it.”