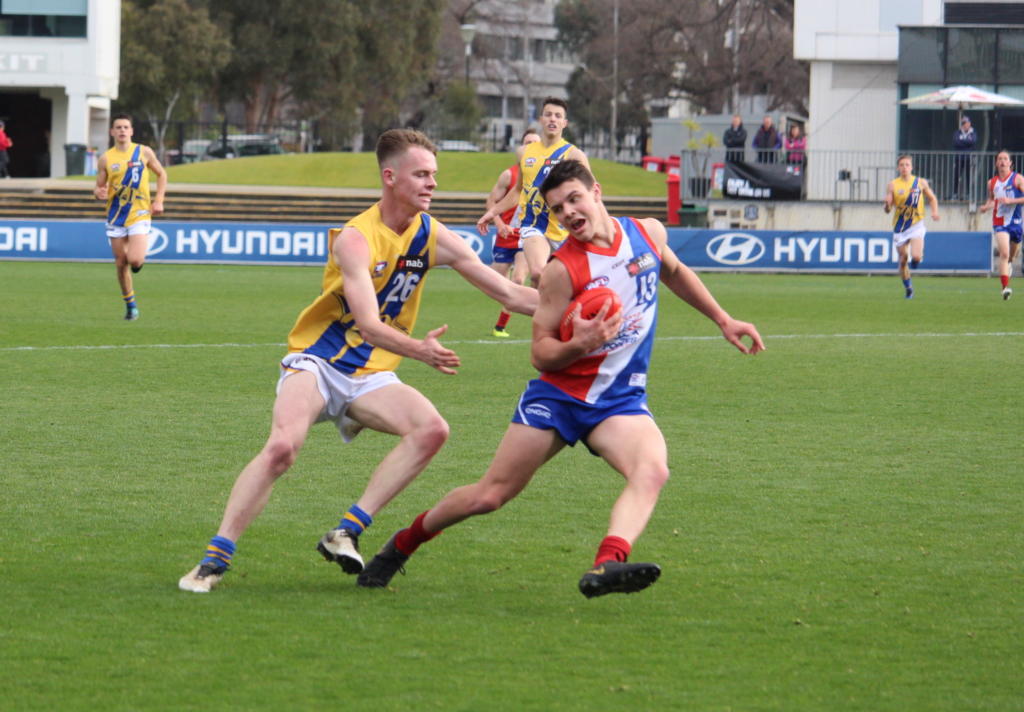 GIPPSLAND Power has moved through to a NAB League Boys preliminary final after a 35-point win over Western Jets in a wind-swept game at Ikon Park today. After Western booted the first two goals of the game, Gippsland piled on the next eight to all but end the contested. A four goals to three final term saw the Jets win the last stanza, but it was not enough to get the victory.

The game started with Western stealing the early momentum thanks to a long-range bomb from Daly Andrews. The Jets’ overager launched a set shot from 55m which sailed home in the wet, before an Aaron Clarke snapped around his body and thanks to a great block from Archi Manton, the ball bounced through for a second major. By that stage, the Jets were 13 points up after six and a half minutes. But for the next 38 and a half minutes, could not seem to break the Power’s defensive structure as Gippsland began to get its running game going.

Harvey Neocleous booted a couple of majors either side of the break with a nice Caleb Serong snap in between off a loose ball. To end the half, Nicholas Proud booted a standard goal from a luckier free kick and then was unlucky not to be paid the mark in the square a moment later. The likes of Harrison Pepper (15 disposals), Leo Connolly (11) and Ryan Sparkes (11) were getting their hands on the ball coming out of defence and running along the wings, while Serong (11) was doing as he pleased working into the game with some impact up forward. For the Jets, Andrews had a case for best on ground with 13 disposals, four tackles and two inside 50s, doing a terrific job on Sam Flanders at the stoppages, restricting him to six touches in the first half. Emerson Jeka and Charlie Comben both looked up and about, with the Jets having an injury concern after Comben accidentally pushed Jets captain, Lucas Rocci into the behind post. The courageous leader came from the field and was okay playing on despite the heavy knock. At half-time, the margin was out to 13 after the Jets had scored the first 13 points of the game to lead by five at quarter time.

Gippsland continued on the dominance after the main break, booting four goals in the premiership quarter to race out to a 39-point lead. The Jets had the first scoring shot of the quarter and their first since the opening term with a bouncing snap from Manton, but soon the Power going going. After a missed snap from 15m out, Fraser Phillips hit the scoreboard with a great set shot after a nice play down the field involving Sparkes and Flanders. Speaking of Flanders, he turned his quiet first half around with a massive third term, picking up nine disposals and going berserk around the stoppages. Josh Smith also added his name to the goal kickers list with a snap around his body, before Sparkes nailed his own goal and Gippsland was in total control.

Both teams finished the game with a number of goals in the last term as Jeka snapped for the jets’ first in more than an hour but by then it was too late. Manton booted his first major after two attempts, while Andrews benefited from a frustrated Serong who gave away back-to-back 50m penalties and sent forward. But the Power were still booting majors themselves with goals to Sparkes and Comben from snaps, and Neocleous with his third running in from 10m out. With the game winding down, Manton doubled his goal total with a smart dribbler from the pocket. In the end it was Pepper with the most touches, ending with 24 as well as three marks, four tackles, four rebounds and three inside 50s, while Serong had 22 disposals, four marks and five tackles. Andrews was the standout for the Jets with 23 disposals, five tackles, six inside 50s and two goals, while Rocci (23 disposals, seven rebounds) and Lucas Failli (16 disposals, five rebounds) were also impressive.