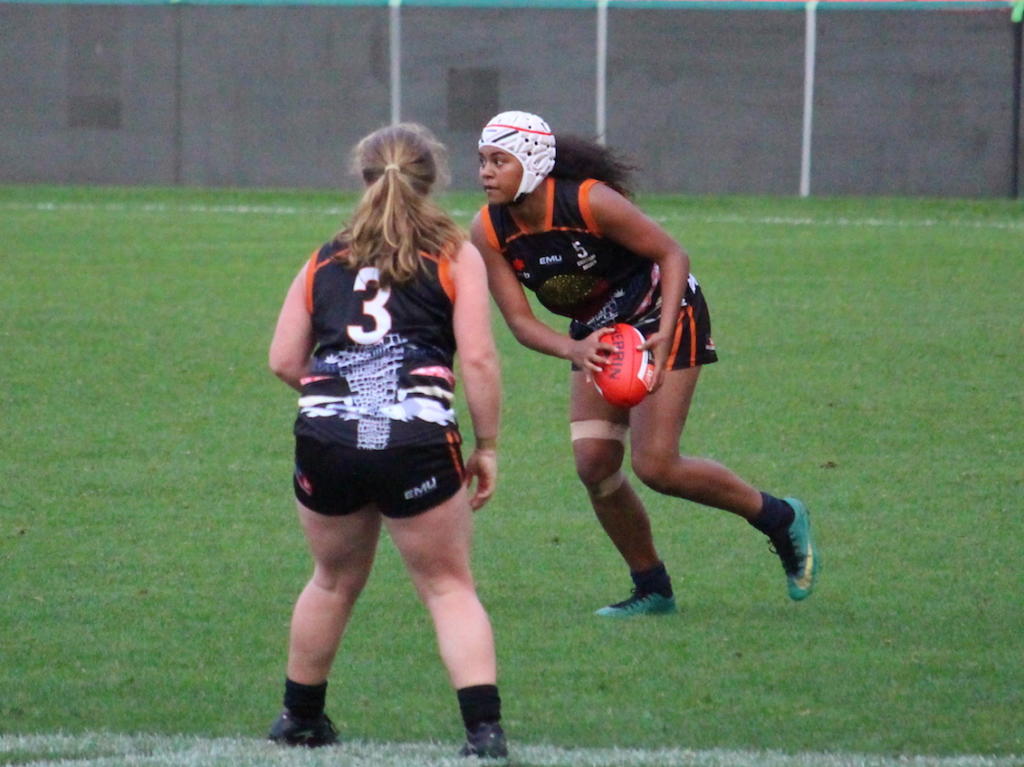 FOR Northern Territory (NT) prospect Shantel Miskin-Ripia, her football journey is as much about past experience and future endeavours as it is about the now, playing with NT Thunder in the Victorian Football League Women’s (VFLW) and gearing up for the 2019 draft.

Like many others the full-back said the ultimate goal is to get drafted, but there are plenty more opportunities out there.

“To get drafted, like everyone else, but nah, just to really go as far as I can and never give up, and just knowing that there’s something else other than football,” Miskin-Ripia said. “If I do get drafted then yeah, that would definitely be something I would focus on.”

Miskin-Ripia currently works at AFL NT, working as a game development trainee and helping the next generation of junior football tragics make their start in the sport. “After I graduated I moved to NT then got the job, and basically I just teach kids how to play AFL, I go to different schools for clinics and I’m running my own Auskick next term,” Miskin-Ripia said. “I work with AFL NT so training is just around the corner, my office is right where the stadium is so I basically go to work then go to training… It’s so good, the support and everything. And everything’s around AFL, so you know the inside and out of AFL.”

Like any job it has its ups and downs, but Miskin-Ripia said she loves helping young kids develop their skills, with the reward of not only seeing them enjoy their experience with the footy but also learning from the kids she meets.

“It’s so good because they’re just so keen. And you’re also learning as well, so you’re giving them and teaching them and learning different stuff as well. You get a few hard heads, that’s something that you’ve gotta put up with,” she said. “I love it. It’s so good, you get a kid that’s having a bad day, you just arrive at the school and they like AFL, boom, ‘I wanna play’ and it’s so good. Yeah it is amazing, it actually is. I love it, I love my job, it’s great.”

Unlike many others, Miskin-Ripia was fortunate to not only start playing football at a young age, but was also able to continue playing throughout her junior years. Though she loves the sport, she said playing is as much about representing her culture as it is about the enjoyment.

“I started in WA, played Under 10s for one of the local footy clubs,” Miskin-Ripia said. “It was just me and my sister to start, no other females were playing to start so we were kind of one of the first two girls to be involved. “And yeah, I kept playing from there. “I just get to represent my culture and my family… it means that everyone can know where I come from and the opportunities I got getting out of where I used to live in Cairns, and all that … just bringing younger people up as well.”

Though she started playing as a junior in Western Australia, Miskin-Ripia spent some time in Cairns before returning after graduating high school. With moving states and playing with boys for majority of her junior years, Miskin Ripia said the transition has been different, especially when playing for Central Allies in the 2019 AFL Women’s Under-18 Championships.

“It’s a bit more professional I’d say, it’s all about wellbeing and stuff right now so yeah, it’s more professional than Cairns,” Miskin-Ripia said. “It’s so good. “I learnt a few skills from the boys to develop my skills and then to show that coming onto the field it’s great. “It’s great. We’ve gelled so well and come together great and got around each other a lot better … the opportunity is great, we’re really embracing it and everything.”

When it comes to inspiration, Miskin-Ripia said her dad gave her a lot of the drive she has now on the footy field, striving to improve and continue to reach her goals.

“Yeah, definitely my dad (has been the biggest inspiration),” she said. “He was a sporty person and he always taught me not to give up because I went from sport to sport, and so I just found AFL and he’s just really believed in me every step of the way and supported me, so he’s one of my big inspirations.”

As for improvement, the full-back said that while her kicking and tackling is something she works on frequently at training, her improved communication on-field is key for the rest of the team.

“I would say maybe my communication, seeing I’m full back and anchor,” Miskin-Ripia said. “With all the AFL’s different rules, like the anti-density, as full back I’m basically the anchor. “So I have to talk and structure out everybody. “I’ve just gotta get more loud I guess, and have a bigger voice and tell the team where to go and stuff like that. “Because I’m full back I have to kick out so that’s very important, I need to know if I can kick it long or short. “But I think also my marking, my higher up marking needs to be improved a bit but other than that it’s pretty good.”