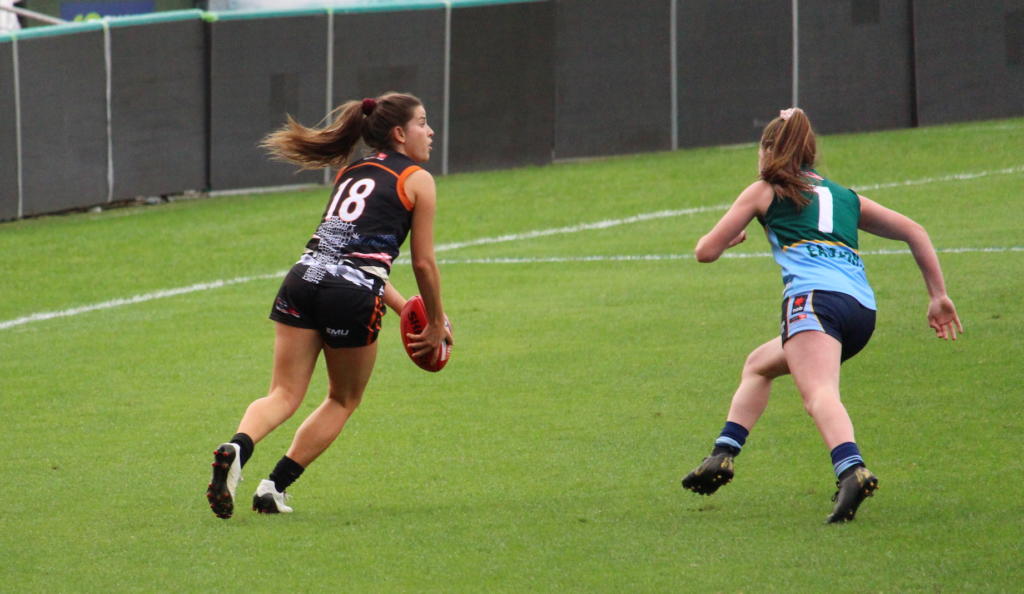 THE journey for Emma Smith has had no shortage of ups and downs, with the youngster forced to jump through hoops. But that did not deter her from playing the game she loves.

“I love the game and the camaraderie that everyone else has outside thinking that women’s sport in general and in footy is not good enough and that we can show that we actually have a lot of skill to showcase,” Smith said.

The Central Allies player picked up the Sherrin at a young age with her passion starting at Auskick. However, a lack of avenues meant she had to step away from the game.

“I started my journey when I was four playing Auskick and then went through to Under 11s with the boys,” Smith said. “I played that for about two years until I couldn’t play anymore. “I couldn’t get myself a permit to actually play with the boys anymore so then I had about a three year gap.”

With her passion to play AFL unquestionable, Smith searched for alternative ways to play footy by attaining a permit that would let her play with the boys.

“I actually wasn’t allowed to play from – I think it was the age of 12, because I was a girl and girls weren’t allowed to because of the physicality and [it was] just the boys competition,” Smith said. “Girls was just not around which kind of sucked so I just had to roll with it and just continue and pick up the skill when I came back into it.”

But once she re-entered the footy world, Smith progressed with ease credit to her innate skill and footy understanding.

Despite having to take a three year break from the sport due to her ineligibility to play, Smith has not looked out of place with her speed and contested ball on full display throughout each and every match for West Adelaide Bloods in the SANFL.

“It’s really cool, there’s (so) many really good players that you can go up against and learn different things about the game,” she said. “It’s just a whole different contest, there’s different age groups that range from like 17 to maybe 30-plus which is really good, to have an opportunity to play against older girls.”

Her skills acquired in the SANFL paid dividends throughout her time with the Central Allies during the Championships, with Smith reaping the rewards of her hard work and enjoying the opportunity to don the Allies jersey.

“It means a lot and I never thought that I would get to this stage ever and because I have been in the program for about four years now last year I thought that I had a little bit of a good time and it just didn’t really happen. Then this year I finally got the letter and it was just great, it just meant so much because all the hard work leading up to this just finally like actually got there and I felt really proud of myself.”

Smith attributes a lot of her football career to her father, who has been essential in helping her achieve her dreams.

“He’s obviously taught me how to kick, everything about footy from such a young age and just been through every game and every training,” she said. “Been with me from the get-go and just really always been really proud of me.”

Although her ultimate goal is to get drafted and play AFLW in the near future, Smith would not change a thing and has enjoyed every minute of her journey so far.

“A lot of sacrifices but I would never turn back, could never go back on those sacrifices I made,” she said. “Everything happens for a reason and if I’m meant to be it’ll be.”