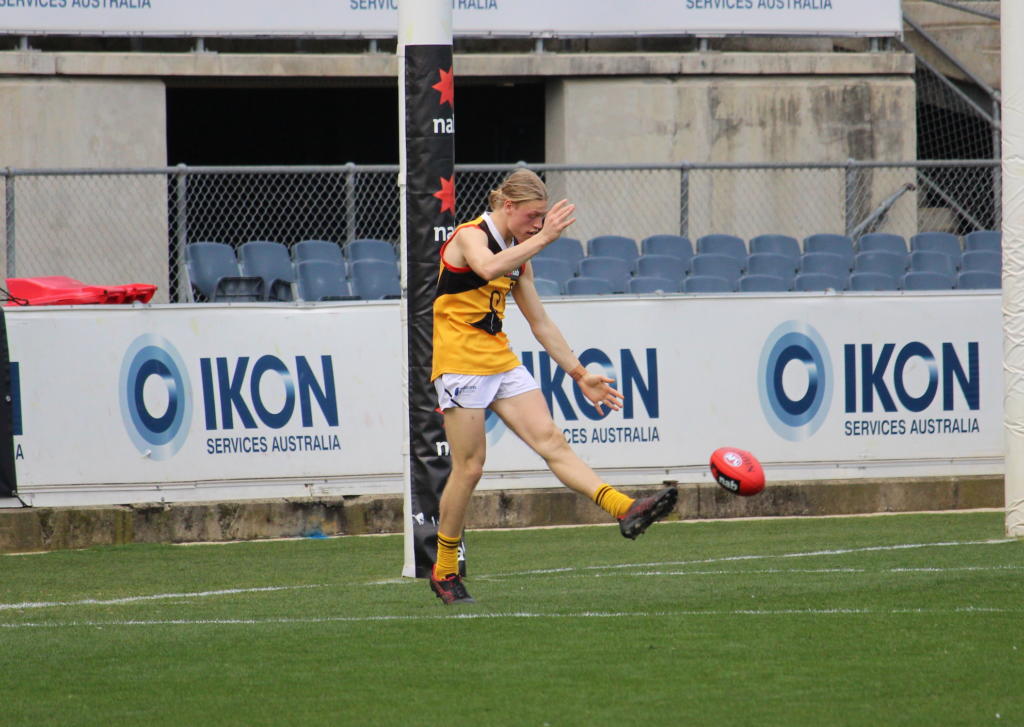 AS the NAB League season finals approach, we take a look at the sides that are no longer in contention for the title, checking out their draft prospects, Best and Fairest (BnF) chances, 2020 Draft Crop and a final word on their season. The next side we look at is the Dandenong Stingrays.

The captain and standout prospect from the Stingrays, one would expect Young is a top 10 lock with a potential top five selection. He is one of, if not the top kick in the draft, with his elite, penetrating left boot able to carry past opposition zones. He is strong overhead, often intercepting forward thrusts at will, and puts in four quarters of effort each and every game. He has also been trialled through the midfield and even up forward with his aerial ability good enough to do so, but his best position is running off that half-back. With great agility and top decision making, Young will hit targets easily down the field, and is a player you can rely on to find a target in difficult circumstances.

A player with real upside, Weightman is still quite raw compared to other players in the draft crop and weighing in at just 73kg at the start of the season. He has shown he has some serious power with his burst and can launch goals from outside 50. He just seems to create something out of nothing when he goes near the ball and oozes X-factor in that regard. He still has areas to work on such as his consistency, and continuing to build his midfield game as he is more influential up forward, but he has plenty of tools from which clubs can work with going into the future at the elite level. A potential top 30 pick.

The All-Australian key defender is one of those rare players who steps up and performs better, the higher the level. His best games came at the AFL Under-18 Championships, where he was rewarded with a spot in the nation’s top side from the carnival, holding down the fort for Vic Country at full-back. He is not a high possession winner, but he is strong overhead and can play at either end. He seems to be more at home in the back 50, and one would imagine he will go in the first half of the draft, possibly the top 30 for a side keen for a key position defender who can swing forward.

Along with the above three, the Stingrays had an additional two players receiving National Draft Combine invites, which were small forward Ned Cahill, and versatile flanker, Lachlan Williams. Both tasted Vic Country representation, as did key position defender Blake Kuipers and ruck Bigoa Nyuon who were the other two players to receive State Draft Combine invitations.

There are a number of possibilities for the Stingrays’ Best and Fairest. While Young will pick up plenty of votes in the games he played, there are also a lot of consistent performers such as Jack Toner, Clayton Gay, Reece Orchard and Luca Goonan who will attract plenty of votes from coaches. Young and Williams are two of the names above who will ones to watch in the count still, however.

The Stingrays were predominantly bottom-age this year with plenty of fresh faces in the side and getting great exposure for next season. Gay, Max Gregory and Bayleigh Welsh are among those players to have cemented their spots in the Stingrays’ side this year, as did key position player Henry Berenger. It is hard to look past the lightning pace of Will Bravo who will no doubt catch plenty of eyes next season with his bursts down the field, while Deakyn Smith is one of a number of others to watch for in 2020.

The Stingrays made finals which was a tick considering the list overhaul at the end of 2018. They won the flag with a consistent top-age group, so a lot of change was forced into the line-up for 2019. They remarkably fired on all cylinders early in the season racing to seven games unbeaten, but once the AFL Under-18 Championships hit and the Stingrays lost that top-end talent, they slipped to an eight-game losing streak. A win over Murray in Wildcard Round ensured the Stingrays played finals, and they were right in the game against Calder on the weekend before the Cannons flew home in the final term.