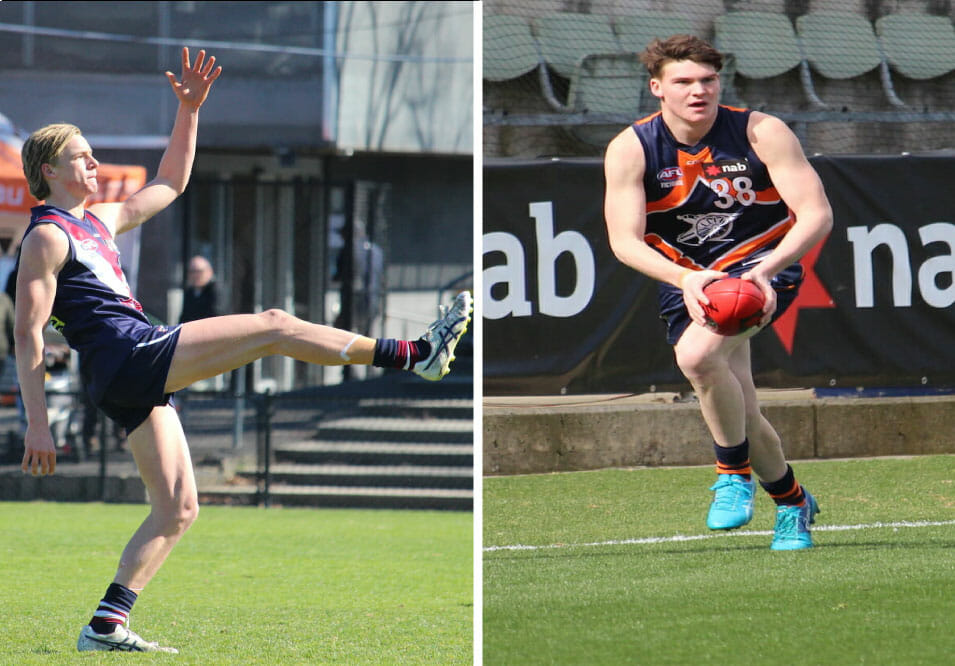 The first semi-final taking place at Ikon Park on Saturday is between Sandringham Dragons and Calder Cannons with the winner to face Oakleigh Chargers in the preliminary finals.

In their only match-up of the season, Sandringham completely dominated Calder to run out 109-point victors in one of the most comprehensive performances of the season. It came in Round 1 which means not too much can be read from it as Calder has more than shown its talent since then with a number of players emerging since the start of the season. The Dragons have maintained consistency throughout 2019 and while they went down to Eastern Ranges in the qualifying final last week, remain one of the leading contenders to take out the NAB League premiership. Both sides have some strong ball-winning midfield combinations and tall options up either end. While the Dragons have more National Draft Combine invites, the key will be the midfield and whether or not the Cannons’ midfield can get on top of the highly fancied Dragons onball brigade and give their forwards first opportunity to apply scoreboard pressure. The Dragons average seven more inside 50s per game which is where the difference could lay in this game, but the Cannons are capable of possessing the ball themselves and working it from defence through the likes of Brodie Newman to get it forward and hit the scoreboard. On paper the Dragons look to be the stronger side, but as we saw last week with Eastern getting up, it will be the best team on the day that takes it out.

The midfield of Ryan Byrnes, Finn Maginness and Darcy Chirgwin will go head-to-head against the likes of Daniel Mott, Sam Ramsay and Harrison Minton-Connell with all six capable of having the ball on a string. Last week Mott and Ramsay dominated the Stingrays, while Byrnes stood tall as Chirgwin and Maginness both had lower games compared to their best efforts. Louis Butler was one player who stepped up off half-back and looms as a crucial runner in the game, while Angus Hanrahan‘s work on the outside will also be important with so many inside ball winners. After Jack Bell went down last week, the Dragons will look to Andrew Courtney, Charlie Dean and Fischer McAsey to fill the key roles up either end and through the ruck, while Kyle Yorke can be damaging if he has his kicking boots on. For the Cannons, Ned Gentile has put together a really solid season, while Harrison Jones, Jeremy O’Sullivan and Mason Fletcher will be the targets around the ground with their aerial abilities. At ground level, Jake Sutton and Jackson Cardillo have proven to be more than capable crumbers. While both these sides have draftable talent, it is hard to look past Sandringham who finished fourth for a reason and at full strength will beat most sides, especially after a down performance the week before.

The two players capable of winning both inside and outside ball through the middle are Maginness and Mott who will be keen to get one up on the other. Maginness had a quiet game last week, while Mott starred for the Cannons in the do-or-die win over the Stingrays. Mott’s advantage is his kicking and his spread, while Maginness is more inside-leaning and could do some real damage at ground level with quick handballs out to teammates or a kick clear of the stoppage.

These two might not match up on each other, but being in the general vicinity, they will be aware of each other’s ability to win the game for their respective sides. Newman is one of the better interceptors and rebounders in the NAB League Boys competition and is not afraid to fill the hole in defensive 50, while Bergman’s set of dukes are as good as anyone’s, especially for his size. He can take the big pack mark or launch goals from outside 50 and is that X-factor inside 50 for the Dragons.