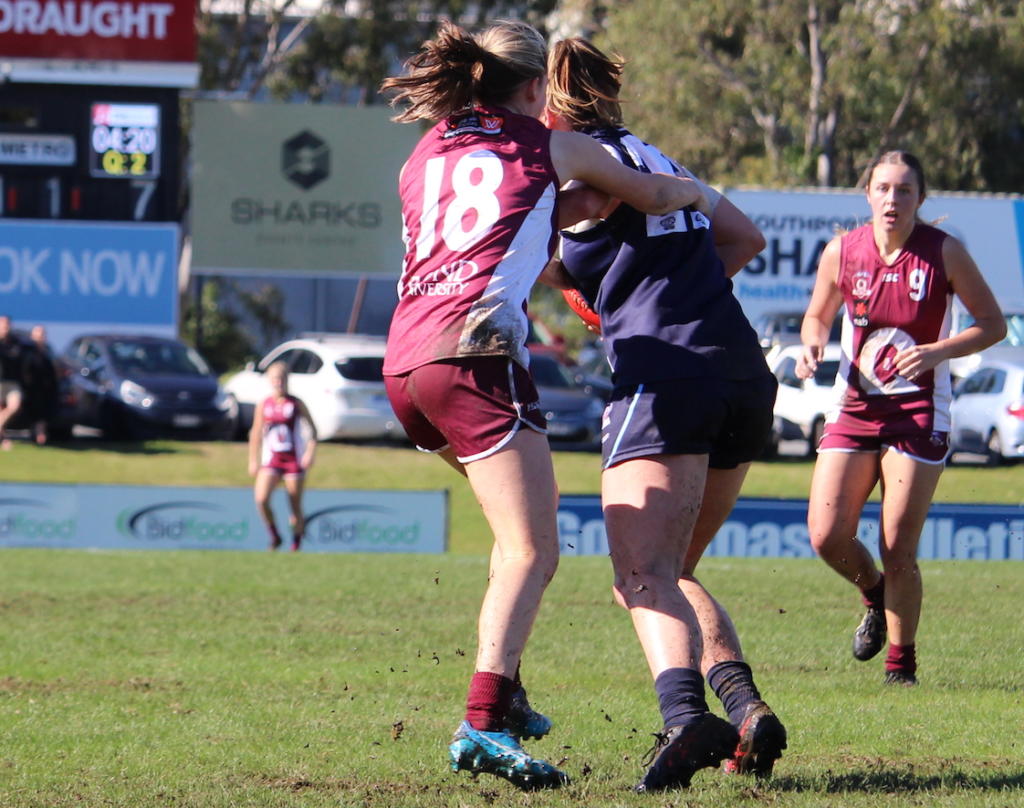 QUEENSLAND’S Hayley Moore had a different start to her Aussie Rules career, eventually finding her way to the sport after a brief stint at netball.

“I was playing netball and then girls from school that were in my netball academy started to play AFL. One time the team just needed an extra player and they asked me to come along to the club and play,” Moore said.

While netball had its benefits, Moore says the opportunities and love she has found playing footy outweighed her enjoyment of netball, especially after facing injury that sidelined her for a period.

“It’s solely footy now because I played netball for six years and then I had a knee injury from playing both the sports at once and then I just kind of stopped playing netball and continued with football,” Moore said. “I think because it’s such a bigger playing space and just the community of football is a lot and I enjoy that a lot more than I did with netball … just using the facilities with football as well, I guess the people that are around football are really hands on with injuries and stuff so they helped me a lot with aspects of it.”

The composed defender pulled on the Queensland jersey once again this year after emerging on the scene in 2018, keen to get on the field and do what she does best – kick with accuracy and mark cleanly.

“It’s a really big experience, putting on the big Q with all the girls it’s like a massive family taking the field,” Moore said. “Everyone runs around with pride it’s just an unreal type of thing and experience. “Under pressure I have pretty good composure, I have my kicking skills and overhead marking also come into play … maybe just (improve) my tackling pressure, being able to hit a bit harder than what I currently do. There’s always room for improvement overall but the main thing I want to work on is my tackling pressure.”

While it was her netball friends that convinced Moore to give footy a go, it was ultimately something she had wanted to do for a long while.

“Dad came from footy so it’s kind of – not in my blood, but you know what I mean. He’d already played it before so it was kind of like, when I had the opportunity arise he was pushing for it whereas mum was a bit like ‘I don’t want you to get hurt’. But I guess dad put in a lot of effort with me to be able to have the skills and stuff,” she said.

Though her dad provided much of the spark to get into the sport, Moore says she’s continually inspired by her Coorparoo teammates and AFL Women’s players, especially those who play with the Brisbane Lions.

“I play at Coorparoo, having all the AFLW girls there it’s really big … you train with them so it’s a really cool experience to have that type of elite level with you. So when they’re not training with the Lions and whatnot we have the girls around at the club level,” Moore said. “They run with Coorparoo, like quite a lot of the sessions and their intensity brings up all the trainings. Yeah it’s crazy, like it’s good seeing where you need to be to get to that level.”

“It would be an unreal thing to be picked up by an AFLW team. Words wouldn’t be able to describe what an experience that would be to be able to play at that level.”