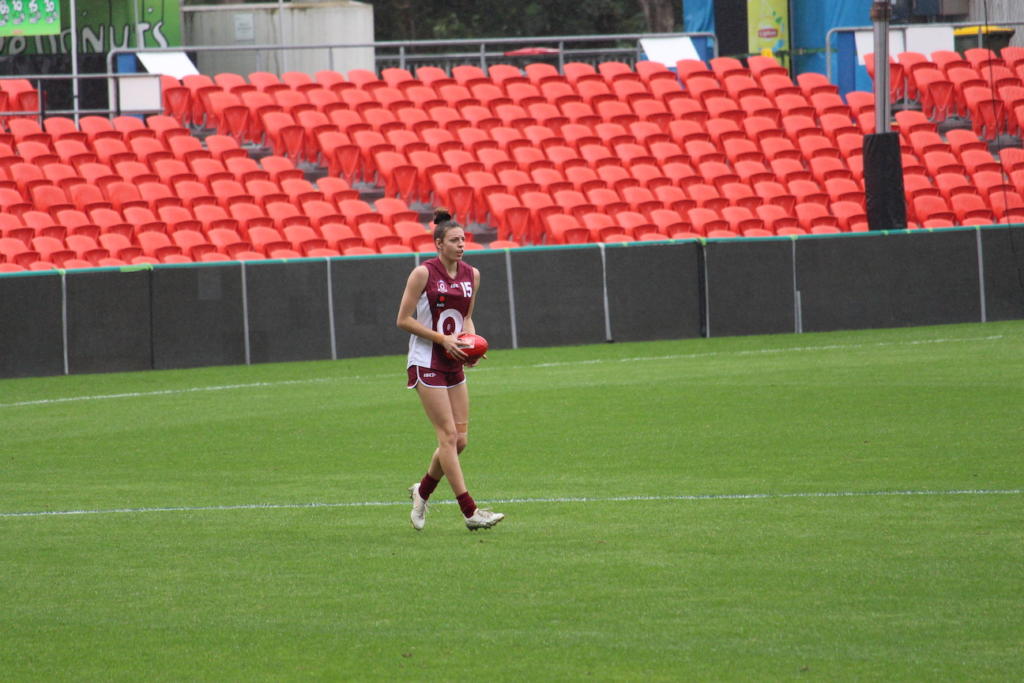 MANY AFL Women’s Under-18 Championships players have played other sports at some point in their life before ultimately choosing Australian rules football. But for Tahlia Hickie, she had a few less talked about individual sports, partaking in gymnastics and diving, and then getting involved in Oztag which proved to be a transition sport into her ultimate choice.

“I started with football at 14,” Hickie said. “I came from a wide range of different sports but I got into football because both my brothers played and my dad came from a football background playing up in Melbourne. “It was a big family sport.”

“I came from a lot of individual sports so I did gymnastics, and I did diving,” Hickie said. “I was doing diving at quite a high level. “But as I got older and I got taller, it got a bit harder to keep that sport up, so I moved into Oztag and then my local club never had a women’s team, so AFL was never really an option. “But then in 2014 when they finally got their team up I decided to give it a go and I fell in love with it.”

Making the transition from individual sports, or even other team sports, can be difficult for some. But for Hickie, she was lucky enough to have the family around her who were familiar with the rules.

“Obviously coming into footy a bit later, I wasn’t very good with my skills,” Hickie said. “But having my brothers and my dad, I kind of got the hang of it pretty quick. “I think it was much easier having support from my family than if I didn’t.”

In a family that were passionate Australian Rules followers, it was equally exciting as accepting when Hickie ultimately moved into the pathway, able to connect a lot better when it came to the household banter.

“I felt more included because all the growing up in a house of guys all sitting down watching the footy,” Hickie said. “I definitely felt left out and once I understood the game more, it was heaps of fun.”

But if the transition was supposed to be easy, then unfortunate fate ripped up the script in her draft year.

“With my mental (barrier), it was quite hard actually,” Hickie said. “It wasn’t an injury, I had something in my ankle and had to have surgery on it. Then I had ages out with that, and I wasn’t able to do sport for a while and that was really, really hard because sport’s been a big part of my life so I was struggling a bit. “But once I got back into it and started running and back into my rehab, it got way better. “When I injured myself again it got hard again, but it was a lot shorter.”

The rehab road can often be tough and lonely, but for Hickie, she had no shortage of support around her which helped immensely and maintained the self-belief that she could get back to the level once she overcame her setbacks.

“So I had all my family who obviously were really, really supportive of me,” Hickie said. “They would come down and do my rehab with me and kick the footy with me when they could. “Then I also had a really big influence at my local football club, Sally Young really helped me. “She did all my rehab with me and she was sending me messages to see if I was okay. Came and visited me when I was stuck in bed and it was really awesome to have all those people on my side.”

Return she did, and Hickie was selected for Queensland, a result that showed her all the hard work had paid off.

“Yeah it was awesome,” Hickie said. “Because I had a year off last year off with injury… Coming back this year as an overager, it was awesome to get back into the high levels and getting that experience back again and hopefully going into the draft.”

The tall said her height helped her have an advantage in the air over opponents when leaping in the ruck, while her vertical jump was something that helped her take full advantage of her aerial strengths such as her marking. Now she is focused on her ultimate goal.

“Because my draft year got pushed back another year it just made me more determined to go onto the draft and hopefully get drafted this year,” Hickie said.