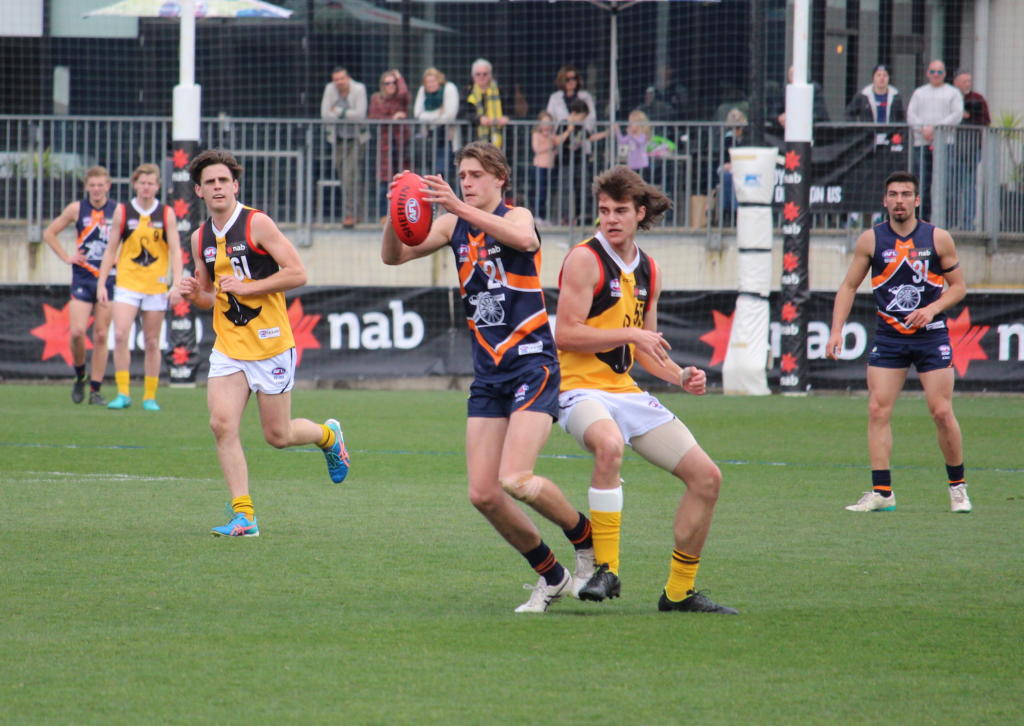 FOLLOWING on from Monday night’s Power Rankings which included our current top 30 players, we take a look at some of the players who could make a move up the draft boards based on their season to date, their upcoming finals or perhaps their testing results come October. Mostly, this piece will mention a number of players who were very close to the top 30, and given the evenness of the competition, it is hard to fit a high amount of players into those spots. All the players chosen are those who have received National Draft Combine invitations and therefore have at least four AFL clubs who have expressed interest in them. For extended profiles on each player, click on their name highlighted in red.

The exciting runner has been building since returning to the Dragons from school football and was second best-on for the side in the narrow loss to Eastern Ranges. His kicking his improved since the start of the season and he has eye-catching traits coming out of defence and along a wing.

The tireless working midfielder is a player who could slot into a senior midfield immediately and has a great first few metres out of a stoppage with his burst able to create separation from his opponent. He is one of the most consistent players in the competition and while his kicking can be ironed out further, he is as dual-footed as they come which is very handy, as well as dangerous going inside 50.

Is no stranger to racking up big numbers in the back half, and will be keen to put together a good finals series. He knows how to find the pill and get it out of defence, and while the elimination final win was not his finest game, he has the versatility to play further up the ground. He also has power in the way he moves, and is a reliable interceptor.

The ruck missed the qualifying final loss to Oakleigh Chargers but is expected to be back for the semi-final clash with Western. Behind Luke Jackson, Comben has emerged as potentially the second picked ruck in the draft and when he is up and about looks just as dangerous up forward as through the middle. He can clunk marks and follow up with second efforts around the stoppages.

Will be an interesting one to see where a bid falls because while he is not the highest disposal winner, he has some athletic traits that are hard to ignore. His break-line pace is very eye-catching and his defensive work is terrific. He takes the game on, and while at times it can cause some mistakes, he has pace to burn and the versatility to fulfil a number of roles.

The All-Australian key defender can play forward if required and has a good set of hands, reading the ball well in flight. He seems better suited in the defensive 50, but given a lack of top-end talls like there was last year, De Koning is a player who could go higher than expected and join his brother Tom in the AFL.

Sidelined with a quad injury all year, trying to work out where the exciting but seriously raw forward will go is anyone’s guess. His work at the 2018 AFL Under-18 Championships was a treat with his high leaping and marking ability on display. He was still very raw in the sense he did not find a lot of it, but his ceiling could be great value for a club mid-draft, though a club could pounce earlier.

Similar to De Koning, Jones is a versatile tall who put his name in lights with some strong performances for Vic Metro at the AFL Under-18 Championships. He spent a fair bit of time in the ruck on the weekend for the Cannons, but can play defensive roles, or be a leading target up forward. Still lightly built, the 194cm player is a genuine project key position prospect and they do not grow on trees.

The balanced midfielder has always been a name in earlier draft conversation, but his form of late has been really impressive. The knock was his contested work but he is finding more of it to accompany his great kicking skills. More so, his work rate to find space is very good and he can hit the scoreboard, looming as a player who could play a key role in a senior midfield in the not-too-distant future.

The Swan Districts defender is as reliable as they come, having spent time across all three levels – League, Reserves and Colts – in the WAFL. While he was able to have more time and space to win the ball in the Colts competition, he showed he was still strong in the air regardless of opponent, averaging five marks per game in the senior ranks. Not talked about as much as some of the other key position defenders, but could be a really solid pick to play a lockdown role or be more offensive at the top level.

Always exciting, the general forward can sniff a goal a mile away and just creates plays inside 50. His consistency is still an area of improvement, but when he gets going, he can do the impossible with a deadly left foot that has some distance on it. He roams outside 50 and can double back to crumb a ball, and at his medium size, can boot goals from set shots or from general play.

Overlooked for Vic Metro selection, Philp is one player who I personally have noticed change since the start of the season. In the opening few rounds you could tell his was solid with good speed and ease at which he won the ball, but his run home has been nothing short of exceptional. He is now using not only his speed but burst out of stoppages, and he would be racking up the metres gained out of the midfield, and getting the ball into the forward 50 to set up goal scoring opportunities. Just as importantly, he got forward and managed to provide a target when resting up there meaning he has added versatility to his repertoire. Should be the first Knights player picked on form this season.

The exciting forward and nephew of Byron has always been a crowd-pleaser with his magical goals from impossible angles and high-flying marks. He is still raw and lightly built, but he attacks the ball with vigour and is a player who could play that perfect crumbing role at AFL level. While Pickett will probably be the shortest player drafted this year, it is hard not to get excited about the potential highlight reel in the future that this kid could produce.

With an endurance base that rivals Sam Walsh or Bailey Smith from last year, Rantall just burns his opponents into the ground. He moves well and gets to areas on the ground that make it hard for opponents to keep track of him, and he racks up the ball with ease. An inside midfielder with athletic capabilities, Rantall is at his most damaging around stoppages where he can burst away, or when inside 50 snap around his body to hit the scoreboard. He seems like a perfect second round prospect because he has areas to work on such as his composure when kicking, but it has been improving since the early rounds and having come from a basketball background, he is still raw and developing.

The South Australian Most Valuable Player (MVP) at the AFL Under-18 Championships has managed to fly under the radar this year comparatively to some of his state teammates. He has been ultra-consistent and his performances at the championships put his name right up into draft contention. Against senior bodies in the SANFL, Schoenberg has averaged 22.0 disposals, 5.0 marks, 4.0 clearances and 3.5 tackles showing he is one of a number of readymade prospects who could fill a role at senior level should he be required to in 2020.

The yin to Schoenberg’s yang, Shute is the definition of a winger, with his hard running, good pace and nice kicking skills on display. He will provide a nice outside prospect who can slot into other roles such as half-back which is a place he has found himself for the Double Blues. Like Schoenberg, Shute is already playing against senior bodies in the Reserves and despite weighing in at 73kg at the start of the year, has shown no signs of being overawed against bigger bodies.

The reliable Gippsland defender missed out on the Power’s qualifying final loss to Oakleigh, but has put together a body of work this season. His offensive work has been more damaging than in past years where he has been asked to play more defensive-minded roles. He had to do just that at the AFL Under-18 Championships, but some of the games he put together for the Power this year have been superb with not only intercepting, but his work going forward and hitting the scoreboard as well. Occasionally makes mistakes but is generally reliable with the ball, and is just an animal who bleeds for the club he plays for and leaves nothing out on the field.

An absolute contested ball-winning machine, Warner racks up the touches with ease and shows composure through the midfield when going forward. He has drawn comparisons to Jack Redden in the way he goes about it, but his drive and desire is what sets him apart from other midfielders. He works his way through stoppages and picks up plenty of clearances, but can also get back and assist the defence, acting as a two-way runner with solid defensive and offensive traits which hold him in good stead.