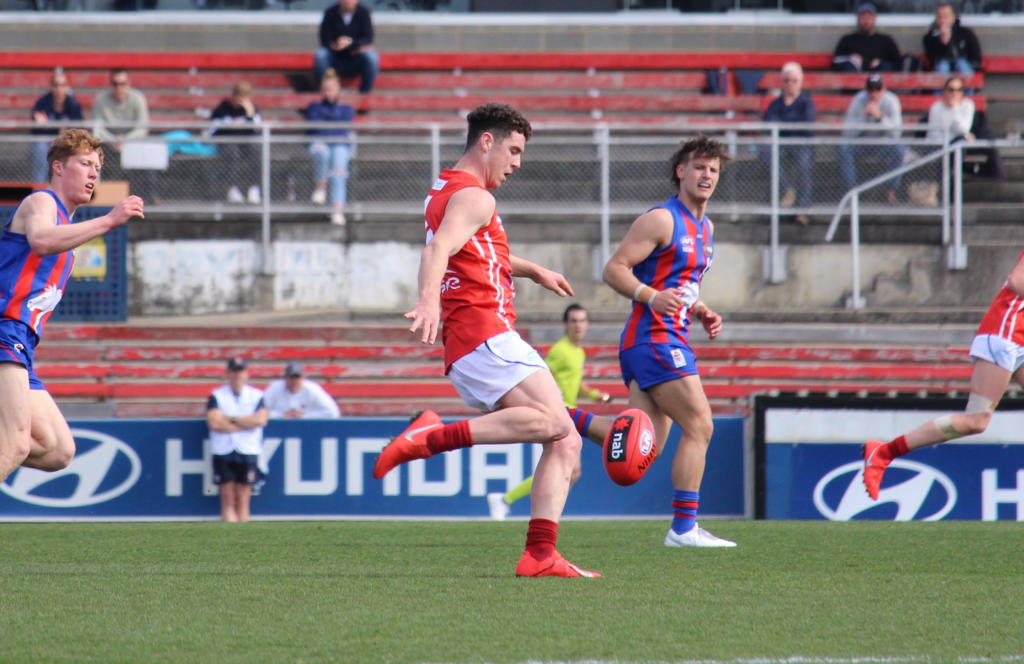 THE cream of the crop contributed to an exciting first week of NAB League finals, and while we have a fair idea of who to keep an eye on at this point in the year, players still continue to rise in stocks at the pointy end of the year. In this edition of Caught the Eye, there is a good mix of talls, smalls, and some players who were not necessarily at the forefront of the national carnival. For extended player profiles, click on each name highlighted in red, and for full scouting notes, click here.

Our scouts said: “D’Intinosante was a thorn in the side of the Western Jets with his forward craft proving a real handful. His efficiency was impressive considering the windy conditions…” – Ed Pascoe

Verdict: Looks to have found a home up forward and you know the Knights rate him when they create set stoppage plays around getting the ball to him. His nous around goal is outstanding and he has only gone goalless in two games this season, capping off a terrific year with fourth haul of at least four majors. Speed and penetration by foot will be the issue in his position at the next level, but the talent is so clearly there for the bottom-age Knights club champion.

Our scouts said: “Although small in stature Failli had a big impact on the game with his work through the midfield really impressing. Usually a goal sneak forward, Failli played well in the midfield often winning the ball at ground level and quickly kicking the ball inside 50.” – Ed Pascoe

Verdict: Features in Caught the Eye for the second time this season and may well do so a fair bit next year too. Has already shown his forward capabilities, which may be his position at the next level, but is impactful through midfield with his speed and booming kick. Can work on accumulation and consistency in his top-age year, but has some real smarts about him already.

Our scouts said: “Rossiter was the dominant big man on the ground and has picked a good time of the year to hit some strong form… His best play was a bone crunching tackle in the second quarter, showing he could influence without ball in hand.” – Ed Pascoe

Verdict: It was always going to be interesting to see what position Rossiter developed best in, and it seems we have finally found an answer on the back of his form as a key forward. This was arguably his best game for Eastern to date, using his strong marking and knack for kicking big goals in a performance where he proved a match-winner. Takes his chances and can do some special things on his day, so keeps his name in the hat.

Our scouts said: “Butler was the standout defender for his team, winning plenty of the ball and using it very well in the windy conditions… His rebound from defence was fantastic…” – Ed Pascoe

Verdict: Has shown different sides to his game of late in combining his usual damaging rebound with lockdown roles on the opposition’s most dangerous smalls. Butler’s work rate across the back half makes him stand out, and he was back to his target-finding best off half-back in this game. His competitiveness to go with that polish is desirable, adding a dimension to his game in a position that often produces dime-a-dozen prospects.

Our scouts said: “Mott was one of Calder’s standouts through the midfield, winning the ball with ease on both the inside and outside… His entries inside 50 were dangerous and he was especially dangerous inside 50 himself kicking a classy goal on the run in the last quarter.” – Ed Pascoe

Verdict: This was a massive performance from Mott and his stocks will have risen as a result. Having improved on his contested ball winning, Mott utilised his mix of inside and outside work in midfield as well as he has all year. He seems to have really hit a peak at the right time after slowly developing his roundedness this season, making him an interesting prospect to watch in terms of draft range.

Our scouts said: “Nyuon had some good moments in the ruck and forward for the Stingrays… He was able to expose his opponent once the ball hit the ground, spreading to space to create an option forward or get in intercepting positions.” – Craig Byrnes

Verdict: The raw and athletic tall continues to show glimpses of his best form, with enough there to suggest he’ll be an easy choice for St Kilda come draft time as a Next Generation Academy (NGA) member. His combination of aerial ability, ground level cleanliness and winding runs make Nyuon an exciting prospect, with his versatility in the key position posts an admirable trait. He loves a goal and celebration too, and seems a much-loved teammate.

Our scouts said: “Flanders may have produced the best underage half of footy for the season to date, or at the very least the most dynamic 10 minutes of the year. From the eleventh to the twenty-second minute of the second quarter, Flanders completely took control of the game and at the time it did not look like anything was going to stop him.” – Craig Byrnes

Verdict: This could be the game that cements Flanders’ place in the top five for club recruiters, serving a timely reminder of his dynamism up forward while also continuing his rise through midfield. Flanders’ explosiveness and hands at the coalface are as good as anyone in this year’s crop, with time up forward taking somewhat of a back seat this year. Despite that, could be recruited as a player who starts off playing more as a forward and has bursts through the middle – think Jordan De Goey.

Our scouts said: “Phillips was fantastic in Oakleigh’s strong start to the game, seeing the bottom age midfielder show some good clean hands in transition and getting involved in a number of plays going forward.” – Ed Pascoe

Verdict: Will be a leading prospect heading into 2020 having already shown his worth in a stacked Oakleigh line-up. His spread and use by foot on the outside make him a damaging wingman, but look for Phillips to spend more time on the inside next year with a more handball-based game. He is capable of doing both and oozes class with his work in transition, so should feature more than just the once in next year’s national carnival.