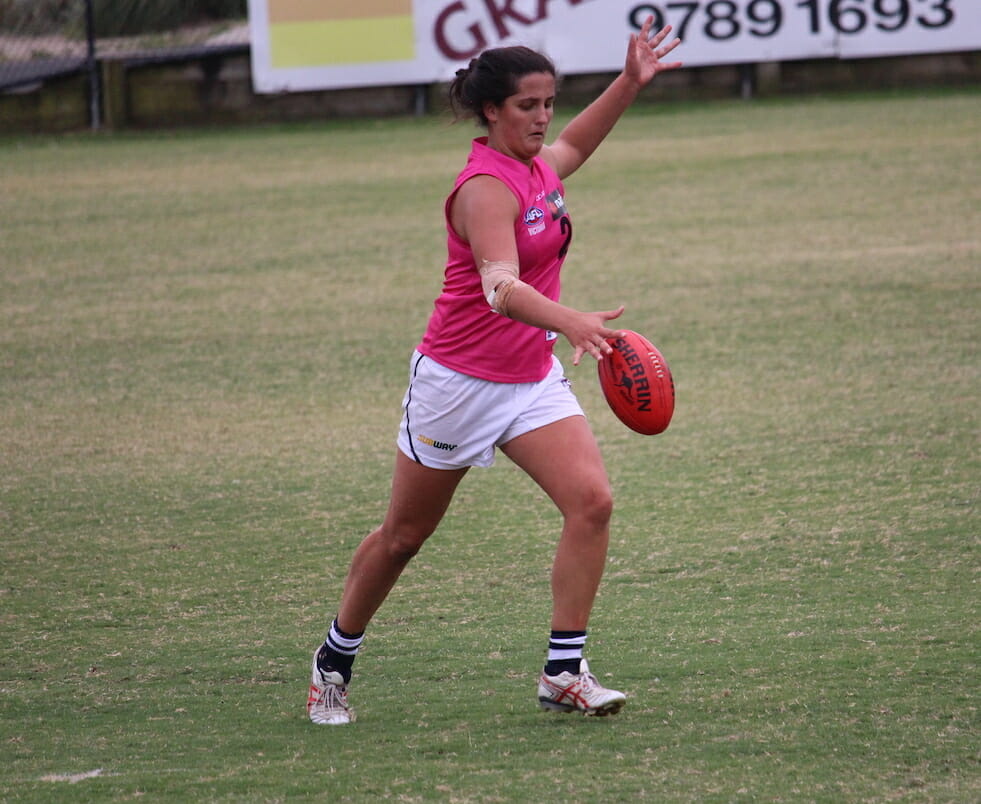 THE first round of the 2019 VFL Women’s finals series saw some big matchups, with six teams taking the field in the new finals system. While Southern Saints get a second chance to make it through finals despite their loss to Collingwood, close victories from Melbourne Uni and Western Bulldogs sees Geelong and Richmond knocked out of contention.

While Melbourne Uni well and truly had this contest in the bag in the early stages, the Cats were unwilling to go down without a fight and certainly put the Mugars through their paces. It was a massive first quarter effort that could have been Geelong’s downfall, conceding four goals to nil before an inaccurate second term that could have turned the tables by half-time, trailing by eight points. While Geelong continued to go hard into contests in the second half it was to no avail, booting three goals to Uni’s four to go down by 13 points. With three multiple goalkickers it was a battle in attack for both teams, with Uni’s Jasmine Garner (four goals, 20 touches, five marks) and Katie Angelis (two goals, six tackles) among the best, while Geelong’s Madisen Maguire booted three from six disposals. Emma Kearney (26 disposals, five tackles) and Jess Duffin (29 disposals, 10 marks) led the disposal count, while young gun Lucy McEvoy (24 disposals, nine tackles) and the experienced Renee Garing (22 disposals, 13 tackles) led the way for the Cats despite a frustrating contest. While the Cats put in a stellar performance against the experienced side this loss ultimately sees them leave the finals race, unable to back up their 2018 form.

It was a low scoring affair that saw Collingwood reign supreme over Southern Saints in the qualifying final, with the Magpies keeping the Saints to their lowest score all season. It was a defensive battle, with both sides going scoreless in the first quarter before Kate McCarthy put the first goal on the board for the match – and the only major for the Saints. With Collingwood having issues breaking through the Saints defence, it was Jaimee Lambert in her 50th VFLW game who found the footy time and time again, booting three goals and collecting 23 touches and 12 tackles. Britt Bonnici put out an impressive performance in what was her best match of the season, racking up 31 disposals and seven tackles while Chloe Molloy also had an impact with 19 disposals and four marks. The shellshocked Southern Saints had big issues getting through the Magpies defence, and while Tilly Lucas-Rodd racked up 24 disposals aided by Olivia Vesely (21 touches, six tackles and five clearances) to impact the contest, the lack of contribution going forward was the Saints’ main downfall.

Despite beating Richmond comfortably both times they played them during the home and away season, the Western Bulldogs were well and truly challenged by the Tigers on Sunday. While the Tigers came hunting in the final quarter to keep the Dogs scoreless, they were plagued with inaccuracy in front of goal kicking 1.5 to finish the match on a low note. NAB League’s Elisabeth Georgostathis impressed for the Bulldogs, booting two goals from six touches and racking up a match high 12 tackles, while Kirsty Lamb (17 touches, seven tackles, one goal) was a solid option around the ground applying plenty of pressure and Ashleigh Guest led her side’s disposal count with 18 touches and nine rebounds. For the Tigers, Kate Dempsey led the disposal count with 20 touches aided by Katie Brennan with 18 and two behinds, sharing the load well while Sabrina Frederick put in the hard yards with 15 touches though uncharacteristically not getting on the scoreboard. Courtney Wakefield kicked two goals from 12 touches and six marks but despite being a solid target forward found more of the behind posts than the goals. This win saw Bulldogs hit a five match winning streak, eliminating Richmond from the finals race in the process.