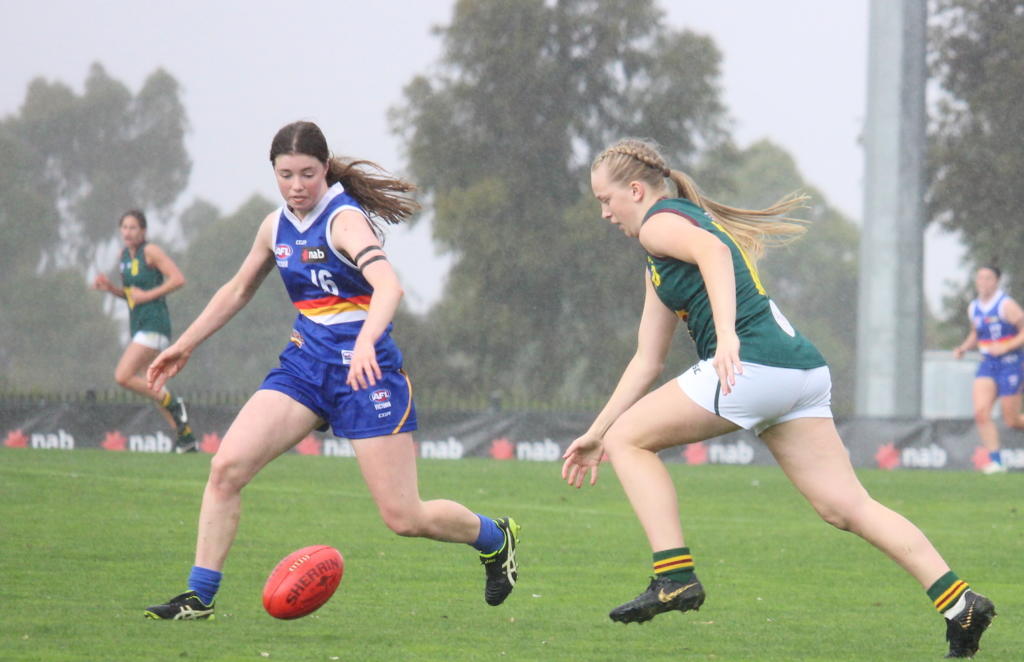 LIKE a number of other burgeoning AFL Women’s athletes, Emma Horne came across from another sport having not played Aussie Rules as a junior. While soccer took up plenty of her time, it was Australian rules football that caught her eye. While many NAB League players were scouted from another club, Horne got her start with the Eastern Ranges through a talent search for girls who had not played before.

“This will be my third season, but my sister played a lot of footy when she was in middle school,” Horne said. “I obviously really wanted to play as well but I never really got the opportunity because I played soccer and they always clash. “Then I found out about Eastern’s first year, they had this talent search for girls who hadn’t played footy before and my sister was part of the group that had played footy before. “There were three different sections that were going out to tryout, so I heard about it that way and then tried out for Eastern, got in and made it through to the final team and that’s when I started playing footy.”

While her sister played a vital role in Horne’s interest in football, it was a connection with fellow Ranges player Laura McClelland that pushed Horne to make the switch. While the idea of a mixed competition was not necessarily preferred and with soccer well and truly still on the radar, Horne eventually found herself thrown into the mix for footy.

“Laura McClelland went to my primary school, she played footy all through primary school and she became one of my friends so it was always a goal for me,” Horne said. “Mum wasn’t so keen as it would have been with the boys at that age, and soccer was something I was also interested in, but it eventually got to the point where I was like I really want to give footy a shot. “I still had to play soccer on Saturdays so I had to make a compromise there and switch teams so I was playing in a different soccer team, but playing footy as well so it was definitely worth it.”

Horne played in a number of sports teams throughout high school, using her telltale grit and determination to push through the Year 10 workload but spending most nights at some sort of training.

“It got pretty hard with school so when I was coming into Year 11, it was time to drop off a few teams and really focus on the sport that I thought I could pursue further in my career, so I thought footy is where I want to go with this,” she said.

While Horne is a big fan of football in general, she says the competitiveness, team spirit and sense of community at Eastern is what she loves the most. As for what she does best, Horne said her running is a real asset while her clean hands help her dish out handballs.

“The competitiveness, the team spirit, getting to know all the girls, the club is a good environment, and it’s more of a community that just a team and when we all get around each other I really enjoy coming to training as much as I do playing in the games,” she said. Being around everyone and testing myself. “Something I really want to improve is being able to use both sides of my body and inside midfield, and being able to work through the packs and utilise my kicking ability.”

Eastern finished fourth in 2019 NAB League Girls competition, going down to Northern Knights in the first final. Horne was impressed with the pre-season the side got in compared to other years, lifting the workload and taking on more running.

“This year I took on a bit more of a leadership role so … for myself I’ve had to step up and take responsibility for my own footy and helping out the other girls as well … trying to improve as a team is the greatest thing to see when you know in yourself improved throughout the season and your hard work has paid off,” Horne said.