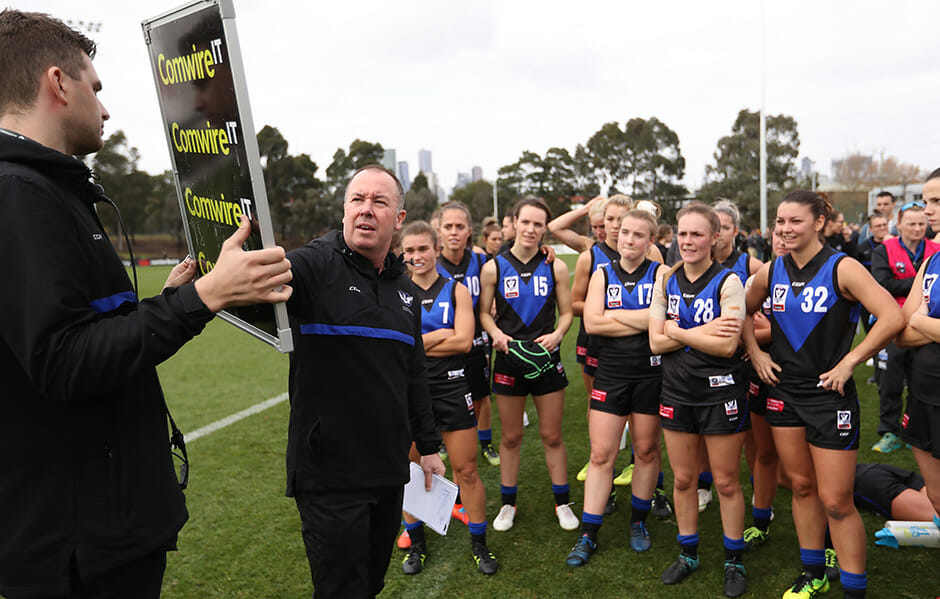 FROM a young age, winning is something that is instilled in every competitive sportsperson. But sometimes there is the need for the greater good, and in the case of the women’s football space, the greater good is growing the competition to the point where sustained success at the elite level is guaranteed. To do that, clubs such as Melbourne Uni are collaborating at Victorian Football League (VFL) Women’s level to foster the next elite talent that will run around in the AFL Women’s. The competitive edge is not lost on Mugars’ coach Scott Gowans, but for the game to grow in the best possible way, Gowans said the VFLW competition is a pathway to breed talent for the next level either for the affiliate club or for an opposition side.

“I think we did that even before the season,” he said. “We were really big on last year’s group of Melbourne Uni players and doing the right thing by them. So we had chat with Lauren Ahrens and offered her to go to Richmond or St Kilda and try her luck there – she went to the Saints , didn’t work out – and then ended up getting picked up by the Gold Coast and ended up at Essendon. Caitlin Greiser has just been picked up by St Kilda, Hannah Ibrahim at Richmond. “There’s a number of traditional Melbourne Uni girls that we talked about what was best for them, not just what was best for us. “From the perspective of the current list, Katie Angelis and Viv Saad, Airlie Runnalls, people like that, they’re all draftable players. They’re all footballers, maybe not for us because of what we need, but for other clubs definitely. “We share a lot of information with the other clubs as well to help their cases as well because that’s a big part of it, trying to get players drafted.”

Every year Under-18 talents filter into VFLW programs from the mid-point of the season and get some games under their belt in order to present their case to be drafted into the AFLW for the following season. While many clubs ideally would draft those players into their AFLW affiliate, sometimes they do not have a need, but instead those players fill one for another club such as the case of one particular Vic Metro Under 18s player.

“Cleo Saxon-Jones that we’ve got is an interesting prospect,” Gowans said. “She’s tall and strong and she probably has just not learnt to use her body to her advantage yet, but for someone that’s 185cm she’s so clean below her knees and we don’t necessarily need a tall forward and we don’t need a ruck. “But where we sit on the spectrum of women’s footy is that it’s really important that we develop Cleo for other clubs, and a couple of the clubs during the year have said ‘can we see Cleo at full-forward’, higher up at centre half-forward – we did that last week on a request – couple of the other players are in similar boats that we’ve played them where other clubs want to see them and I don’t necessarily think it hurts your win-loss, but what it does do is the ball will go back the other way at some stage and we’ll ask someone to have a look at a player in a different position. “I just think it’s a really healthy spot that the competition’s in.”

In some cases, it can also work in the opposite way, with North Melbourne AFLW list manager Rhys Harwood working hard behind the scenes to not only spot the best talent for the Roos, but approach other clubs with Mugars players who might be best suited for a particular AFLW club.

“Yeah Rhys Harwood does that (approaches other clubs to recommend players),” Gowans said. “He promotes our list to other clubs when they ask questions and vice-versa, which is really good as well. “We’ve got the players hearts and interests and at the end of the day we want to see them all drafted, hopefully to North Melbourne but it just can’t happen because of the list spots. “But if they can get drafted somewhere else then you still feel proud to be part of their journey.”

To give an idea of how much women’s football has developed over the past couple of years, Gowans said that now a collaborative approach is in place with clubs working together for the greater good, the competition is becoming increasingly even. When asked if the process was made easier in the women’s space compared to the men’s – where competitive advantage is priority – Gowans said the overall change in the women’s space over the past two years made it possible.

“It’s a great question because I would have said no (that it was not easier than the men’s) in 2017 when I was in Diamond Creek, because it was very competitive from a club point of view, but I think it’s completely changed around now and it’s completely different to the men’s as well which is great,” Gowans said. “At the end of the day we’re all custodians of this game. “Part of our jobs is to win, yep no problem, but it’s also to develop football for beyond 20 years time. “To do that, the only way to do that is to expand quickly and if you’re going to do that, you’ve got to have collaboration with the clubs. I think it’s a really healthy spot and you run on the field with your 23 players and absolutely want to win, but there’s also a piece of everyone’s involvement in the game that says you must do what’s right for the game as well which goes to style of footy and everything like that.”

But North fans should not worry too much, because the list management team has plenty of cards up its sleeve. Another area that has changed in the women’s football space is the recruitment process and role delegation within football clubs. Gowans said coaches were still involved in the recruiting process, but more after the recruitment team had identified players. The North Melbourne coach said he flew up to the AFL Women’s Under-18 Championships to get a first hand look at the next potential stars of the competition, with a special eye on the Tasmanian prospects such as Mia King who the Kangaroos have first access to given their association with the Apple Isle.

“I watch the vision and get the reports from her (King’s) coaches and how she’s going,” Gowans said. “She’s going really well. “I went up to Nationals and watched her. “You have an eye on it but I think if I reflect back when I was at Carlton in Year 1, it was a little different in list management in Graham Burgen was the head of Carlton’s list management and he did a job there that was he had the say on the list, but Damien Keeping, myself, a couple of other people we all had a say in it. “Whereas now I presented how I want to play, the type of players I like and then Rhys Harwood and his team have gone out and found those players to that game plan which I think is a much healthier way to do it because you’re concentrating on what I’m employed for which is to coach. “So that’s really beneficial.”