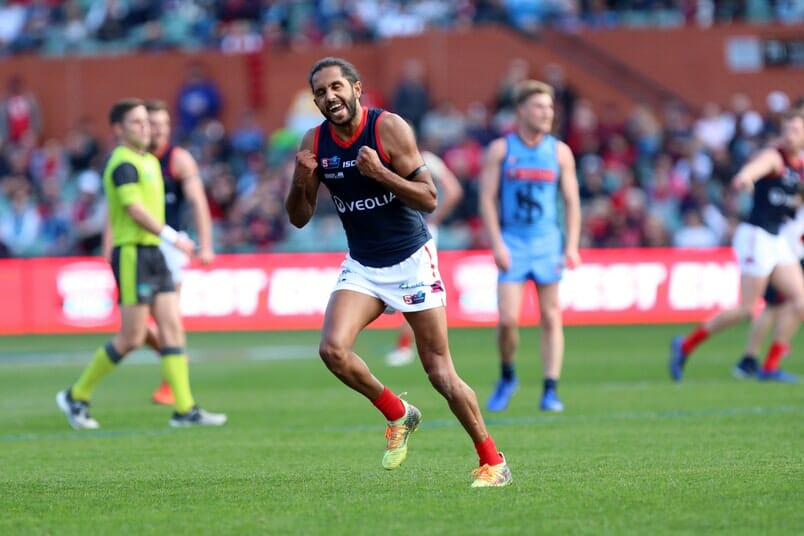 THE first week of South Australian National Football League (SANFL) finals action is in the books, with Norwood remaining alive and Port Adelaide Magpies moving through to face Glenelg next week for a spot in the decider.

Norwood has kept its 2019 premiership hopes alive with a strong 14-point victory over Sturt. The Redlegs did not make the most of their scoring chances in the first term, booting two goals from six scoring shots, before piling on five goals to three to extend the lead to 14 by half-time. A high-scoring third term resulted in Norwood booting six goals to four to create some separation with a 30-point advantage at the final break. Sturt came home with a tailwind booting six goals to three in the last quarter, but fell short to go down 16.14 (110) to 15.6 (96) by the final siren. Dom Barry was influential with 28 disposals, five marks, three clearances, four tackles and 3.3, joined among the bests with Lewis Johnston (28 disposals, nine marks, three clearances and one goal) and Cole Gerloff (25 disposals, five marks, five clearances and four tackles). Top Under-18 draft talent Dylan Stephens had 14 touches, two marks, two clearances, three tackles and kicked a terrific goal, while Anthony Wilson and Brady Dawe added three goals each. For the Double Blues, Jake Sutcliffe had a day out up forward with 4.2 from 13 touches and six marks, joined on the goalkickers list by Joshua Hone (three goals). Sam Colquhoun was the dominant ball winner, picking up 34 disposals, 11 marks, six clearances and nine tackles, while James Battersby (22 disposals, four marks, nine clearances, six tackles and a goal) and Danyle Pearce (21 disposals, seven marks and two clearances) were also impressive.

Port Adelaide Magpies have enjoyed a 30-point win over their AFL Reserve counterparts in Adelaide Crows, booting six goals to four in both halves to secure the win. Neither team could be split in the first term with three goals on the board each, but a three goals to one second quarter opened the game up for the Magpies, before Adelaide hit back with three goals to one of their own in the third term to cut the deficit to just three at the final break, A dominant five goals to one final term resulted in the Magpies running away with the contest, 12.13 (85) to 8.7 (55) at Adelaide Oval. While both South Australian sides are out of finals for the AFL, a number of AFL-listed players still impressed. Willem Drew (32 disposals, four marks, seven clearances and eight tackles), Jack Trengove (29 disposals, seven marks), Cam Sutcliffe (28 disposals, four marks, seven tackles and five clearances), Joe Atley (28 disposals, four marks, 10 clearances and three tackles) and Trent McKenzie (27 disposals, 11 marks) all racked up big numbers for the Magpies, while Peter Ladhams booted two goals – one of which was a ripper – from 23 touches, six clearances, four marks and 23 hitouts). For the Crows, Lachlan Sholl (24 disposals, six marks ad three clearances) impressed, as the retiring Andy Otten also had a team-high 24 touches to go with his five marks and seven rebounds. Alongside him in defence was Pierce Seymour with 22 disposals, four marks, two tackles and seven rebounds), while Matthew Wright (20 disposals, nine marks and three tackles) was also strong.

Second placed Sturt has earned the right to face top-of-the-table Norwood next week after downing Woodville-West Torrens in their qualifying final clash. The Eagles started strongly to booted three goals to two in the first term, though missing multiple opportunities to only head in with an 11-point lead. Both sides booted a goal in the second term but it was the Double Blues’ turn to be plagued with inaccuracy, booting five behinds from six scoring shots as the Eagles lead by eight points at the main break. A dominant third term saw Sturt boot seven goals to three and head into the final change with a 16-point lead before holding on in a arm-wrestle of a last quarter with both sides booting two goals and securing the 11.9 (75) to 8.10 (58) victory. Overage key forward Hugo Munn was impressive for the Double Blues, picking up 20 disposals, three marks, four clearances and five tackles, while fellow over-ager and father-son prospect Casey Voss had 19 touches, three marks, two clearances, six tackles and a goal. Joel Thiele had 15 touches, five marks, five clearances and nine tackles, while James Richards and Mihail Lochowiak both booted three goals in the win. Adam Trenorden (16 disposals, two marks, six clearances and 10 tackles) and Josh Shute (15 disposals, seven marks) were others who stood tall. For the Eagles, Ben Nason had a game-high 22 disposals, as well as five marks, two clearances and four tackles, while Jake Comitogianni helped himself to 20 disposals, four marks, two clearances and a tackle. Up forward, Harrison Morgan booted three goals from 12 touches, while Josh Morris kicked 2.2 from four kicks. Other names who played from South Australia’s Under 18s side were Kysaiah Pickett (11 disposals, one goal) and Harry Schoenberg (16 disposals, three clearances and three tackles).

Central District put Glenelg to the sword in the side’s elimination final at Peter Motley Oval, running away 50-point winners. The Bulldogs booted seven goals to one in the first half, and kept their opponents to just three goals for the game, as the Tigers’ inaccuracy of 10 behinds from 13 scoring shot proved an issue. In a remarkable game, Glenelg actually dominated possession with 56 per cent, also having 62 more touches and 45 more marks, but it was the tackling pressure of the Bulldogs (90-62) that helped Central District get the win. Isaya McKenzie (19 disposals, three marks, three clearances, eight tackles and a goal) and Ari Rigney (17 disposals, 12 tackles and a goal) were among the top possession winners for the Bulldogs, as Jordan O’Brien held that title with 22 disposals, seven clearances and seven tackles in a best-on performance. Fellow South Australian Under-18 representative Oliver Shaw (18 disposals, four marks and three tackles) also had a strong game, while bottom-age talent Corey Durdin booted two goals from 10 touches and nine tackles up forward. For Glenelg, it was Callum Park who stood tall with 20 touches, 12 marks, three tackles and a goal, while a host of teammates picked up big numbers. Ben Sawford had a game-high 27 touches, five marks, two clearances, four tackles but an inaccurate three behinds, while Reid Kuller (25 disposals, six clearances and eight tackles) and Sam Davis (22 disposals, seven marks, five clearances and two tackles).

South Adelaide kept its season alive in the Under 18s competition with a dominant first term all but ending Glenelg’s hope of an unlikely flag from fourth spot. The Panthers piled on 7.3 to 0.0 in the first term in a complete obliteration, before the Tigers booted six goals to one in the second term to suddenly draw within 15 points at the half. South Adelaide took control again in the third term with four goals to one and opened up a 38-point advantage, with Glenelg flying home with three goals to one, but not enough to overcome the 25-point final siren margin. Nicholas Kraemer picked up 23 disposals, nine marks, six clearances, seven tackles and a goal for the Panthers, while Damon Freitag (21 disposals, five marks, eight clearances and four tackles) and Zac Dumesny (20 disposals, seven marks) were also among the high possession winners. The Panthers had no shortage of players who hit the scoreboard however, with Tyler Oliver (three goals), Daniel Sladojevic (two) and Beau McCreery (two) also having impressive matches. For the Tigers, Kye Dean had a big game with 24 touches, two marks, five clearances, seven tackles and a goal, while Josh Slade (16 touches, four marks, five tackles and two goals) also impressed. Austin Kitschke and Cooper Horsnell both booted multiple goals in defeat, while Luke Pedlar (17 disposals, six clearances) and Will Schreiber (17 disposals, six clearances) were also consistent despite the loss.

Woodville-West Torrens has advanced through to the 2019 SANFL Under 18s Grand Final after downing West Adelaide by 26 points at Maughan Thiem Kia Oval on Saturday. The Eagles trailed by three points at the first break, but soon got on top, booting four goals to two in the second term to open up a 13-point advantage at the main break. A six goals to four second half – in which the Eagles booted an extra goal compared to their rivals in each quarter – saw them record a handy 14.8 (92) to 10.6 (66) win. Michael Frederick was the top player for the Eagles with 21 disposals, five marks, two tackles, two clearances and three majors, while Henry Smith (11 disposals, three marks, five clearances, 11 hitouts, nine tackles and a goal) was strong in the ruck. Zane Williams also hit the scoreboard with three majors from 16 touches and three marks, while Luke Barnett (22 disposals, seven clearances and six tackles was strong through the middle. Northern Territory representative Ben Jungfer had the 19 disposals, four clearances and four tackles in the win, while a couple of potential father-sons in Taj Schofield (21 disposals, three tackles) ad Jase Burgoyne (15 disposals, one goal) also contributed. For the losers, potential 2020 number one draft pick Riley Thilthorpe racked up 24 disposals, nine marks, two clearances, eight tackles and a goal, while top-age draft prospect Will Day managed 20 disposals, nine marks and five rebounds in the loss. For others, the consistent Joel Groom had 27 disposals, nine clearances, eight tackles and four marks in a mammoth effort, while Bailey Chamberlain also racked up the clearances with 19 touches, nine clearances and six tackles.