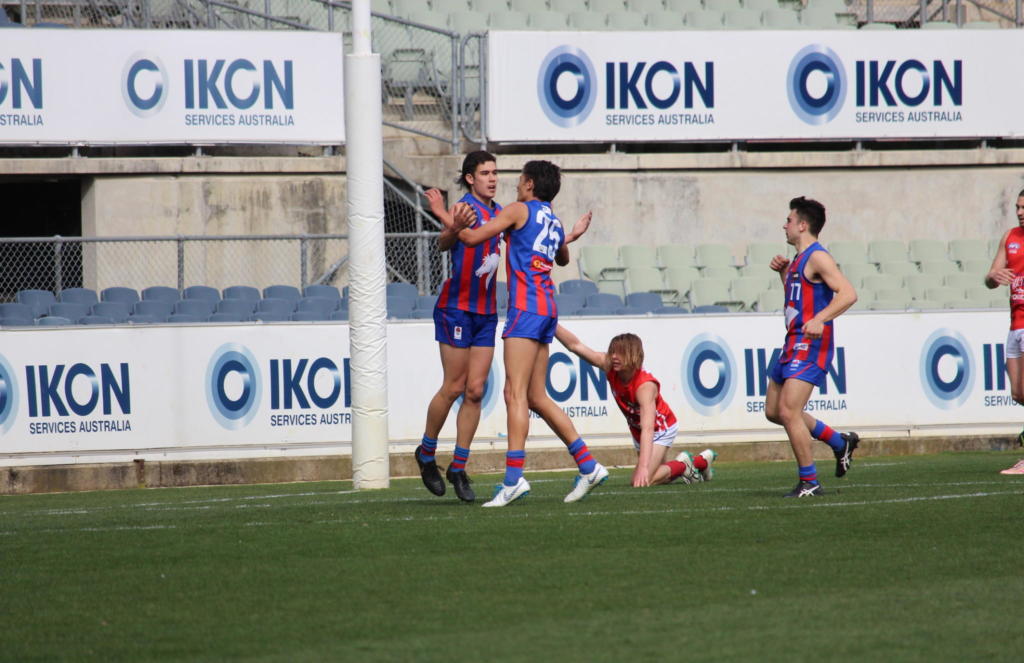 OAKLEIGH Chargers have advanced through to the 2019 NAB League Boys Preliminary Final after downing Gippsland Power in one of the finishes of the year. Both teams had momentum swings throughout the contest, with the Chargers on top early, the Power storming in front, only for the Chargers to come again with seven of the last 10 goals to run over the top and take home the chocolates.

The first quarter belonged to Oakleigh with four consecutive goals to open proceedings, and Western Bulldogs Next Generation Academy (NGA) prospect Jamarra Ugle-Hagan looking dangerous against a defence missing their best interceptor in captain Brock Smith. Ugle-Hagan took four marks in the first term, converting two goals from set shots and setting up another one to Bailey Laurie with class tight on the boundary. Without hesitation he spun and delivered a neat centring pass into Laurie who did not let him down with the set shot. The first goal had come from Nick Stathopoulos who found himself free inside 50 and had no problems converting the set shot from straight in front. Facing a four-goal deficit and frustrated, Gippsland Power’s Caleb Serong gave away a downfield free for a late bump, only to suck the player he knocked over to put him on the turf and his appeal to the umpire was successful to win the ball back. It seemed to ignite Gippsland who to that point had been a rung below a switched on Oakleigh side. Trent Baldi booted back-to-back goals with a set shot and then getting free and doubling back to goal to kick one from point blank on the run. Having cut the deficit to a couple of goals, it was painful when Cooper Sharman somehow got his hands free in a congested stoppage inside 50 to flick the handball behind his head to the running Reef McInnes who slammed it home seconds before the siren for Oakleigh to head into the break 17 points ahead. Serong was on fire for the Power, picking up nine touches and taking a contested mark over the much taller Nick Bryan, while Oakleigh had plenty of ball winners with bottom-agers Will Phillips (nine), Finlay Macrae (seven) and Laurie (seven) leading the way. The ominous sign for the Chargers was that despite the lead, their two biggest names in Matt Rowell and Noah Anderson had combined for just 11 touches in the first term.

If the first quarter belonged to Serong, the second quarter belonged to Sam Flanders. The dynamic forward booted four consecutive goals to steal the show and open up a massive 23-point lead at half-time. The term started with Harvey Neocleous booted a goal from a quick snap in the opening minute after great work from Serong out of the middle, before a run-down tackle from Fraser Phillips aided a goal to Leo Connolly who Phillips handed it off to on the run. The long raking kick from Connolly outside 50 sailed through and the Power were up and about. Oakleigh had a rare chance through Laurie inside 50 but his set shot missed to the left, and the Power immediately made them pay. Flanders proceeded to put in one of the best individual quarter performances, piling on 12 touches and four goals over the next 15 minutes, all of which came from set shots. He was isolated one-on-one with an opponent and time and time used great body work to nudge his opponent off and apply more scoreboard pressure. After his fourth Flanders went into the middle and immediately went to work setting up the next major, bombing long inside 50 to Serong who rotated deep with his Vic Country teammate, and it came off hands for Phillips to run onto it perfectly and dribble it home. The siren sounded with Gippsland remarkably on top after booting nine of the past 10 goals.

After counter-opposite opening terms in the first half, the third quarter became an early shootout with both sides showing off their ability to hit the scoreboard. Stathopoulos quickly added Oakleigh’s first major since the last few seconds of the first term, running into the open goal for his second goal. It seemed to open the flood gates at both ends as Tom Fitzpatrick won a 50m penalty and converted from point blank. Both Phillips’ got on the board for their respective sides, with Will turning onto his right and snapping around his body for Oakleigh, before Fraser did the same from the next clearance off his left from a Serong clearance. Flanders had an ambitious shot from the pocket but sprayed it out on the full, then Laurie made it count with a successful shot from the other end. When Stathopoulos made the crowd believe it was Groundhog Day – running into the square and booting it from point blank range again – Oakleigh was back into single digits. Will Phillips and Ugle-Hagan both had chances to cut the deficit further but missed. At the final break, Flanders (23 disposals, six marks and four goals) and Serong (20 disposals, four marks and five inside 50s) were dominant, while Phillips (20 disposals, four inside 50s and one goal) and Trent Bianco (20 disposals, four inside 50s) were the top disposal winners for the Chargers.

As if the players needed a challenge in the last term, the heavens opened and the rain poured down and it became a slog. Not before Ugle-Hagan could slot his third and cut the deficit to within a kick. Riley Baldi quickly responded as the rain began to fall, running into an open goal and answering the call with a major, but from then on goals were hard to come by. Bianco seemed to defy that though when he unleashed a bomb from just inside 50 and it sailed through for a vital major either side of a Ugle-Hagan spray from 15m out. The behinds were enough to put Oakleigh up by a couple as Gippsland desperately tried to get the ball forward. But instead it was Oakleigh through Stathopoulos who somehow found a way deep in the pocket to kick an almost impossible goal and hand the Chargers an unlikely come-from-behind win.

Rowell finished the day with an influential second half and 30 disposals, two marks, five tackles and four rebounds, joined among the big ball winners in Will Phillips (28 touches, four tackles, six inside 50s and three rebounds) and Anderson (25 disposals, three inside 50s), while Stathopoulos and Ugle-Hagan combined for seven majors. For the Power, it was the duo of Flanders (28 disposals, seven marks, four inside 50s, seven tackles and four majors) and Serong (24 disposals, four marks, six inside 50s and four tackles) who did the bulk of the damage, while Connolly (21 touches, 11 rebounds and a goal) and Tye Hourigan (16 disposals, four marks, nine rebounds and two tackles) were also consistent.