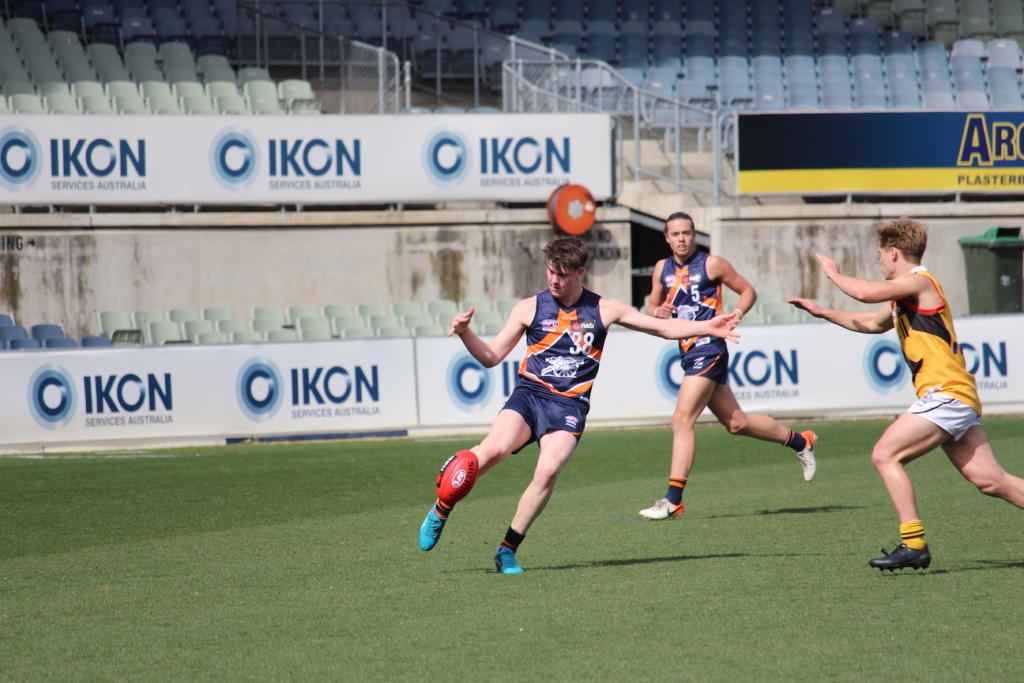 CALDER Cannons advanced through to the NAB League semi-finals, running over the top of Dandenong by 36 points at Ikon Park this afternoon.

It was a tightly contested tussle for the most part with Dandenong’s top-end talent unable to take control, while Calder ran home well on the back of their solid unit across the board in the 11.9 (75) to 5.9 (39) result.

A dour first term was highlighted by bursts of individual brilliance, namely from the likes of Daniel Mott going inside Calder’s forward 50 and Clayton Gay up the other end. Having cut his teeth as an inside midfielder in recent weeks, Mott was sensational on the outside with his forward run and delivery by foot, while Gay took a desperate sliding mark close to goal as both players hit the scoreboard. The story of the quarter was how both sides booted long to outnumbered contests, with swings of momentum made relatively long due to numbers behind the ball. With neither side able to get on top or take their opportunities best, it remained a tight contest at one goal apiece.

That soon changed as Dandenong broke away with a string of three goals in quick succession, with a silly 50m penalty to Bigoa Nyuon setting the wheels in motion. Majors to Will Lewis and another to Gay put the Stingrays in a handy position at over three goals up, but the Cannons were not about to let slip as they hit back late in the peace. After spraying some straight forward shots, a nice bit of forward craft from Josh Keeping gave them a sniff, with a Josh Eyre set shot conversion after the siren just what the doctor ordered – seeing the margin cut to just eight points at the main break.

The Calder momentum looked to have halted soon after half-time as Kobi George scooped up and booted a fantastic goal on the run to kick-start the third term, with another period of end-to-end frustration ensuing afterwards. Mason Fletcher continued his serious case of the yips as he missed a couple of gettable chances, but Sam Ramsay and Jackson Cardillo had no such issues as they kept their side in the hunt. The final break saw Dandenong with their noses in front, but with plenty of convincing to do going into the last with their top-end guns yet to take the game over.

Ned Cahill and Hayden Young were thrown into the middle for the final term, helping win the first centre bounce clearance. The takeover wasn not to be though, as Calder ripped the game away from the Stingrays with a four goals to nil finish – sealed by Mott’s second goal from range late in the piece.

Mott was one of an impressive four Calder multiple goal kickers, also leading the ball winning stakes with 32 disposals alongside Ramsay (33). Jake Sutton and Jackson Cardillo were menacing up forward with two goals each from 16 and 12 disposals respectively, while Ned Gentile (19 disposals) was also solid. For Dandenong, Luca Goonan was ever-present with 28 disposals, followed closely by Jack Toner (26) and Lewis (22, one goal). Despite being held to five touches, Gay was impactful inside 50 with two goals and some high flies.