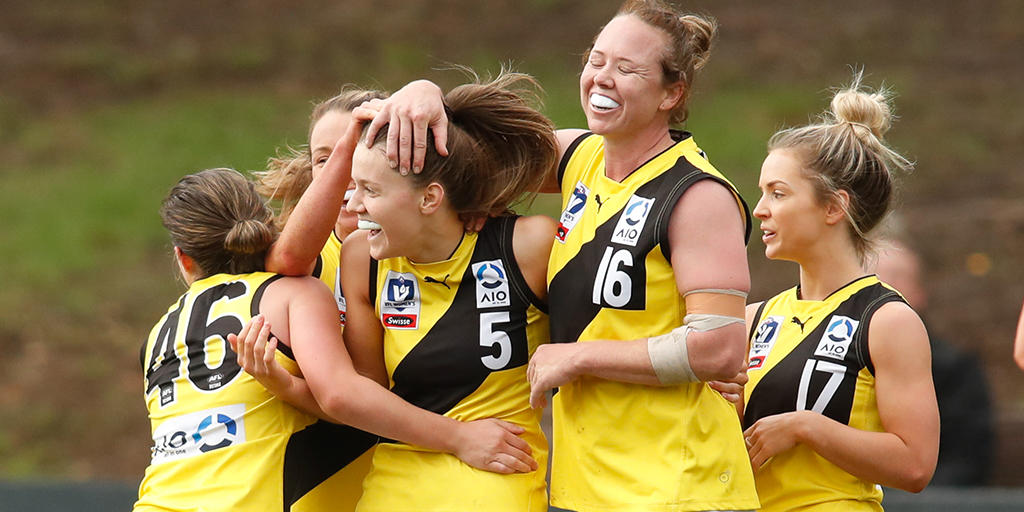 RICHMOND is keen to turn the tables on its Victorian Football League Women’s (VFLW) elimination final opponents Western Bulldogs, when the pair faces off this weekend. The Tigers suffered two defeats at the hands of the Bulldogs with just six points separating the sides in Round 9, before the Bulldogs ran rampant a fortnight ago running out 43-point victors. On that day however, Tigers’ coach Tom Hunter said his side did not look itself.

“We’re hoping for third time lucky, that’s the case,” Hunter joked. “But nah, two weeks ago we played them, one of those things we took away from it was it didn’t look like us on gameday. “So we did a lot of learning what we want to look like in certain situations, so it’s a fantastic opportunity to get to play them again and put those learnings in place.”

They say a week is a long time in football and thats is undoubtedly something the Tigers can subscribe too. A week after the disappointing loss to the Bulldogs, Richmond outlasted top-of-the-table Southern Saints by six points last week – a result that could have a huge mental advantage, with a potential match-up between the sides the following week if results fall that way.

“I think it was a good game to play towards the backend of the season,” Hunter said. “Southern Saints are a quality side in terms of their pressure and their contest, so for us to get a little bit of a run into that for finals gets a really good preparation. “We will reflect on the first six games where we were successful on the scoreboard and we’ve learnt a lot from those games where we weren’t quite. “I think we’re in a really good place to be successful in this finals series.”

Richmond is in the unique situation – along with the Southern Saints – of building its inaugural AFL Women’s list for the 2020 season and therefore has enjoyed having a lot more experience around the club after a bottom four finish in the competition last season. It has meant the Tigers have brought in players such as Sabrina Frederick, Katie Brennan, Christina Bernardi and Monique Conti from other clubs to bolster their list. Hunter said the role they played both on and off the field has been terrific.

“Certainly on-field they’re just quality footballers whether it be that AFLW or VFLW level so we’re really lucky to have them in our program,” he said. “But they also bring experience of what elite program looks like. “One of the selling points of our program is we don’t need them to come in and create something, they can just add to it. “So they’ve been really, really great with that. Katie’s been really good with that, she just leads by example. “Sabrina’s another one. “Christina Bernardi with her leadership has been fantastic, so we’re really grateful to have those girls in our program.”

Like all VFLW clubs, Richmond has a number of talented Under-18s who have been impressing at different points throughout the season and Hunter said they were having an impact on gameday.

“Teagan Brett‘s played one game, she kicked three goals,” he said. “Emma Horne debuted for us on the weekend, Maddy Edwards out of Eastern Ranges, Maddy Baldwin another one out of Bendigo Pioneers. “We’re a little bit restricted with access to those players just because of how far away they are. But we get them down for once a week, introduce them to our program. “More for them next year if they don’t get drafted, we’re more than happy to have those girls in the program.”

Those players do not have to look to far for inspiration when it comes to seeing dreams realised a year after their top-age draft year. Just in the past week, former Bendigo Pioneers’ midfielder now Richmond Tigers’ onballer Kodi Jaques will don the yellow and black in the 2020 AFLW season.

“Kodi’s a really good example because she’s been elevated to our AFLW list,” Hunter said. “She’s worked really hard and she’s matured a lot from 18 to 19 and I know that’s a silly thing to say, but she really has. “Grace Egan‘s the other one who’s Murray Bushrangers. “She’s had a fantastic year and that’s because we’ve got her full-time. “The advantage of having our girls more time around our program, more development for them and really clear expectations of what it looks like going forward.”

Richmond and Western Bulldogs go head-to-head at Adcon Stadium, Port Melbourne from 11.45am on Sunday, September 1. The winner of the clash will face the winner of the Collingwood and Southern Saints match the following week for a spot in the grand final a fortnight later.