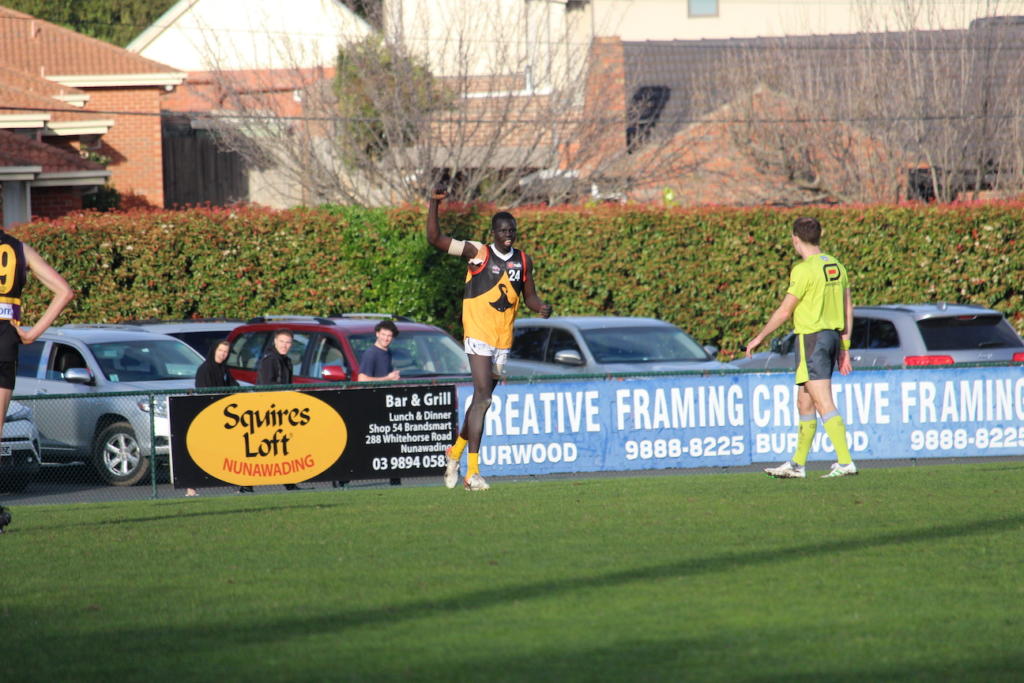 DANDENONG Stingrays have snapped an eight-game losing streak at just the right time, downing Murray Bushrangers to move through to the NAB League Boys finals series. The Stingrays seemed to answer all of the Bushrangers’ challenges, racing to a five-goal lead at one stage, being pegged back in the same quarter to trail at half-time, then gaining breathing space in the third and never looking back. They ended up getting home in a tight contest thanks to some terrific individual efforts.

The first quarter provided a number of highlights in a see-sawing affair with Jimmy Boyer booting an early goal on the run, before Cody Weightman earned a free kick from the very next inside 50 and levelled the scores. The next inside 50 saw Boyer burst away to take a great mark out in front but his accuracy betrayed him on the shot as it drifted to the side. Clayton Gay was having an early impact for the Stingrays through the middle, while Hayden Young was intercepting and mopping up in defence. Weightman was the star in terms of potential though, flying high to almost pull down a massive grab, before attempting a tricky goal from the same play. Connor Macdonald made the Bushrangers pay when a mistake deep in defensive 50 saw the 2021 draft eligible player sidestep his opponent and kick truly on the run from 15m out. Murray co-captain Cam Wilson stepped up when they needed him, putting the Bushrangers back in front. Dominic Bedendo came close to setting up a loose Boyer in the square, but a desperate smother from a Stingrays opponent ensured the ball went out of bounds. Dandenong made no such mistake running it down the other end, with Ned Cahill pouncing and snapping around his body with a great goal to again hand Dandenong the lead back. At quarter time, Young and Dylan Clarke were the top disposal winners for their respective clubs with 10 apiece, while Cahill and Luca Goonan had seven each. With just six inside 50s for 3.1, the efficiency of the Stingrays was terrific, while the Bushrangers had more than double that with 14, but could only manage the 2.3.

In a tale of two halves, the second quarter was all Dandenong and then all Murray for the Bushrangers to lead by four points at the main break. In what looked to be a complete rout in the first half of the quarter, Dandenong piled on four consecutive goals to open the term and the margin was 30 points with Murray yet to have an impact in that period. Gay booted the first of the term, before a rarely seen free kick handed Bryce Milford back-to-back goals, converting one then pushed over after it had gone through, for the forward to boot his second consecutive goal in the space of 30 seconds. A minute later, Cahill pounced on a loose ball and put it through and the Murray faithful would have been sweating with the scoreboard reading 7.3 (45) to 2.3 (15) at the 11-minute mark of the quarter. Enter Lachlan Ash and Josh Rachele. The pair took the game by the scruff of the neck, with Ash mopping up off half-back and getting it forward for Bedendo to kick his first, and set off the chain of midfield dominance. Murray won all the centre clearances for the remainder of the quarter, as Rachele booted two, almost set up another, and Cam Wild ran onto his own clearance after a quick handball and booted one home as well. Cameron McLeod was the other beneficiary in front of the sticks with a major from long-range, but it was Rachele’s second major just before the half-time siren that had the crowd up and about. In 15 minutes of football, Murray had turned a 30-point deficit into a four-point lead. Clarke (15 disposals, five inside 50s) and Ash (14 and two) were so important, while Rachele had 12 disposals, four marks and two goals to his name, For the Stingrays, Cahill (14 disposals, two marks and two goals) and Young (13 disposals, two rebounds were the standout players.

Unlike the high scoring second term, just two goals were converted in the third, as Dandenong retook control with a 2.2 to 0.2 quarter and headed into the final change with a 14-point advantage. William Howe put his side back in front and enjoyed a big term, nailing a goal then narrowly missing a second when it hit the post. Jye Chalcraft had the chance to regain the lead with a 50m penalty and shot from just inside 50 but it sprayed out on the full to the left, something his brother Kade did later in the term on the run but to the right. Despite having their chances, the Bushrangers could not add a goal to their total as the passage of the term was brilliant play by the Stingrays, as Howe switched into the middle to Nathan Heath who bombed long to Gay backing back and taking a strong grab. His goal, coupled with an earlier running goal from Will Lewis gave the Stingrays a comfortable 16-point buffer, with a few misses late in the quarter to the Bushrangers pegging it back to 14. Ash (22 touches) and Clarke (18) were the standout ball winners for Murray, while Young (18), Goonan (18) and Gay (13 and two goals) were the prominent players for Dandenong.

If there was any doubt about whether the goals had dried up in the game following the slow third term, then that doubt was quickly erased in the opening two minutes with three goals on the board. Cahill claimed goal number three with yet another hard running goal in just 16 seconds, while Cam Wild got on the end of one up the other end after a chain of handballs despite Dandenong’s pressure. Bigoa Nyuon had a purple patch early in the fourth, clunking a towering mark and slotting the goal, then repeating the effort in the air on the other side but could not quite put it through the big sticks again. Gay had an opportunity for another major close to the pocket and almost put the game beyond doubt, but the dribbler bounced the wrong side of the post. Instead it went up the other end and Bedendo capitalised on his second major with a long-range set shot and the game was still alive with just 17 points. Moments later, the man of the second quarter stepped up with a mid-air kick to cut it to just 11 and the atmosphere was fever-pitch. Ben Kelly almost made it less than a kick the difference with a clever snap but could not quite convert. Dandenong almost had an end-to-end goal up the other end with Nyuon winning a foot race but having a fresh air kick and the ball was rushed across the line. Murray was trying to move the ball along the boundary, but the Stingrays camped back there, and with three minutes left, a turnover saw Cahill free inside 50 taking an uncontested chest mark but missing the set shot though it was a handy point, putting the margin out to 13. When Lachlan Williams had a flying shot on goal with a minutes remaining, the miss hardly mattered as the Stingrays would move through to the finals series. One last icing on the cake was Nyuon popping up once again to cap off a massive final term, taking a grab just before the siren and making it a 21-point win.

Cahill was the standout Stingray in the end with 23 disposals, four marks and 3.3, in a game that could have been even bigger, while Young (21 disposals, six tackles and three rebounds) and Gay (15 disposals, four marks, five inside 50s and two goals) were also very impressive. For the Bushrangers, Ash stood up across four quarters to no-one’s surprise, finishing his season with 29 disposals, five marks, five inside 50s, eight rebounds and five tackles. Rachele showed his class with another three goals from 18 disposals and five marks, while Clarke (22 disposals), Chalcraft (20) and Wild (16 and two goals) all tried hard in defeat.