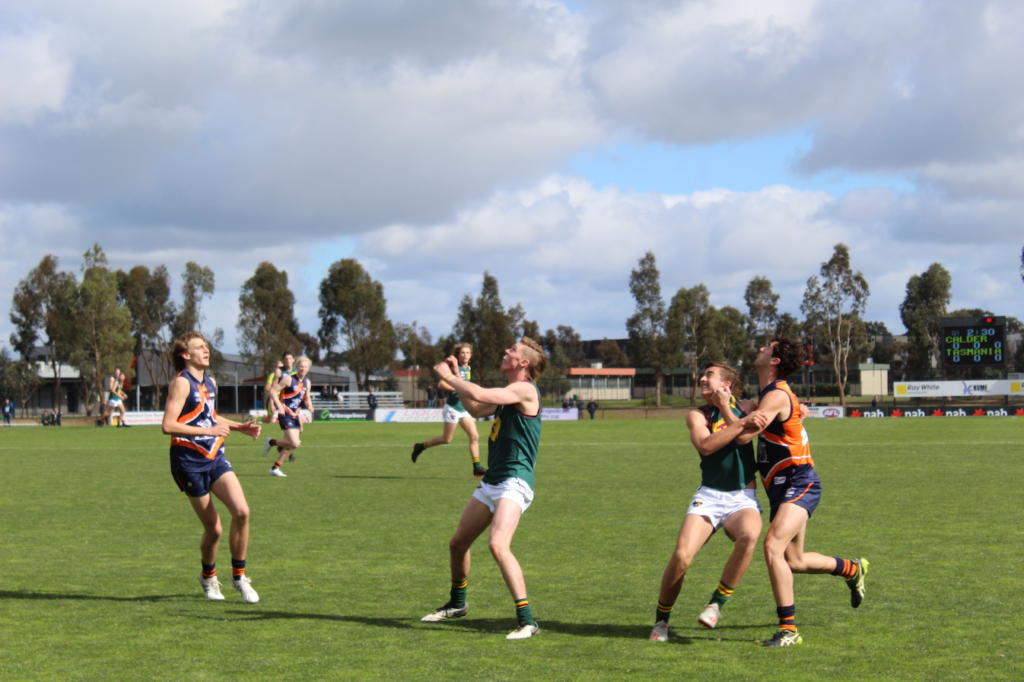 CALDER Cannons have executed the great escape with a heart-stopping six-point win over Tasmania Devils at RAMS Arena today. The Cannons managed to get in front when it counted, booting three goals to one in the final term to break away and secure the 9.9 (63) to 7.15 (57) win, as the Devils would rue inaccuracy when in control of the contest. They brought the heat with an undermanned side that was missing a number of key players, and looked at times as like they might cause an upset, but the composure of the Cannons late in the game got them home to book a finals berth.

After a tight first five minutes, it was Calder’s Daniel Mott who broke through for the opening goal at the six and a half minute mark to give the home side the early lead. Four minutes later the visitors replied through versatile utility Matt McGuinness as their defensive pressure around the ball carrier was proving effective. Despite the week off, Tasmania was looking up for the fight, controlling more than their fair share of possession in the first term. The Devils continued to pepper the goals and threaten to score with their tackling pressure forcing turnovers, but after three consecutive misses, key forward Harrison Jones broke hearts converting a major with 17 seconds left in the term to hand the Cannons a four-point lead at the first break. At quarter time, the Devils had 12 extra disposals, but a massive 11 extra tackles, while Calder had eight extra marks showing their patience with ball-in-hand and ability to take control in the air. Mott (seven disposals), Sam Ramsay (six) and Harrison Minton-Connell (six) were all getting going for the Cannons, while Will Peppin and Isaac Chugg both picked up the seven touches in the opening term. Peppin also led the way with his tackling pressure, laying a game-high four tackles in the first 25 minutes.

Tasmania came out with the same fierce intent in the second term and got reward early through a goal to Jake Steele who swung forward and kicked truly to hand the Devils the lead. They struggled with accuracy again though, booting five consecutive behinds but had opened up a seven-point lead. With two minutes remaining the Devils had restricted the Cannons from scoring, before a Ned Gentile behind, and then a Mason Fletcher goal dragged Calder back into it to level the scores by the main break. Much like the first term, despite more scoring shots and limiting the impact of the Cannons’ forwards, a last-minute goal meant the visitors had to head into half-time level with the home side despite clear dominance with 18 more disposals and a whopping 20 more tackles than their opponents. Curtis Brown had a huge second term, picking up 16 disposals in the first half to lead all-comers, while Ramsay (13) and Brodie Newman (12) were having a say with the ball down in the defensive half of the ground. For the Devils, Peppin continued his good first quarter form to head into the main break with 12 touches, while Chugg (11) was also prominent, as Jackson Callow had a say in the air, taking four grabs to go with his nine disposals.

The third quarter started with Calder looking like the side that had finished fifth with bottom-ager Campbell Edwardes, and Fletcher both converting goals in the first six minutes to open up a 13-point lead. The Devils had a two minute purple patch with two goals in as many minutes, as Rhyan Mansell and Jye Menzie slotted majors and in the blink of an eye, it was even-steven again. Key position player Jack Rand booted a crucial major a few minutes later and it looked like Tasmania was now in control. Not to let the game slip away, Ramsay put his side back level with a late goal, before Baynen Lowe responded with a major of his own a minute later. By the time the final siren sounded, the Devils maintained a five-point lead in a game that was just as hard to pick a winner at the final break as it had been pre-game. McGuinnes had a monster quarter picking up 11 touches, while Ramsay was not far behind with 10 of his own, as Gentile also impressed having picked up 17 touches to the final break. Newman was unmatched in the air with 11 marks from his 16 disposals, while Peppin was productive as ever. The Devils still had more of the ball, with a plus 16 in disposals, though Calder was wrestling it back in terms of time in possession. The sides had just six tackles apiece in the quarter, and the Cannons had plenty of looks, but the Devils’ defence was up to the task. With a quarter to play, just five points separated the sides.

The last quarter belonged to Calder with three consecutive goals effectively handing them the win against a brave Tasmania outfit. After 10 minutes of both sides fighting it out Minton-Connell stepped up and put one through the big sticks to regain the lead by one point. Minton-Connell was not done yet though, determined to drag his side over the line with another major eight minutes later and the Cannons were seven points clear and looking good in low-scoring conditions. When Jeremy O’Sullivan marked close to the 50 and converted from long range, the Cannons were partying knowing they lead by 13 points with just two minutes remaining. Zac Adams missed a chance late in the game and brought in back to a flat two goals, and there was a glimmer of hope when Menzie burst away inside 50 and put it through, only for the Devils to look up and realise there was 15 seconds left on the clock. With the time taken to get back to the centre circle, the look on the Devils’ faces in the middle told the story – head in hands as the siren rang out knowing their season was over and the Cannons had initiated a great escape.

Ramsay finished the game with a massive 30 touches, 10 marks and a goal for the Cannons, while Gentile was huge in the second half, racking up 26 disposals, six marks and eight inside 50s for the game. Newman was strong in defence with 22 touches, 12 marks, three rebounds and two inside 50s, while Brown (21 disposals) and Mott (20) also picked up big numbers. For the Devils, McGuinness was massive in the second half, amassing 25 disposals, five marks, nine rebounds and a goal, while Jared Dakin picked up in the last quarter on debut to finish with 23 disposals, three marks and eight inside 50s. Peppin (19 disposals, four marks, six inside 50s and four rebounds) and Menzie (18 disposals, four marks and 2.2) also impressed, as Callow (16 disposals, seven marks and three behinds) could have had a big day in front of the sticks, while Under-16 Most Valuable Player Sam Banks had 17 touches and seven marks.