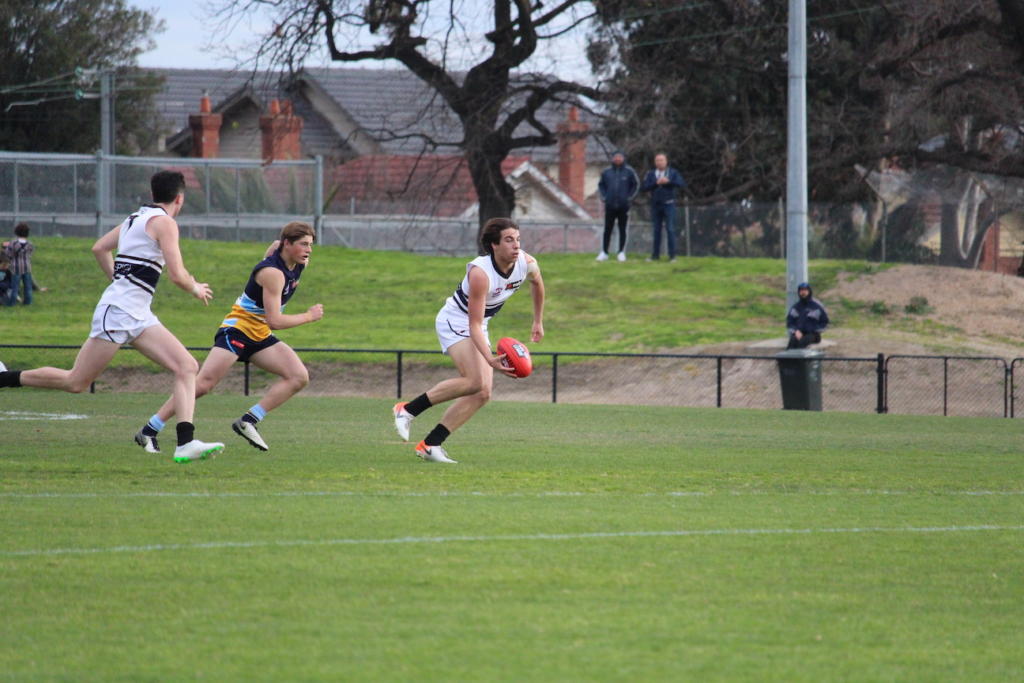 A MIDFIELD masterclass from Northern Knights duo Sam Philp and Adam Carafa has lead the Knights into the finals series after missing out last year, defeating the Bendigo Pioneers by 42 points at Preston City Oval today. The pair had a combined 52 touches in the win, as they took control of the inside midfield and let the forwards go to work with Northern booting nine of the last 10 goals to see off the Pioneers. Bendigo was in the game for the majority of the contest, and the seven-goal final deficit did not reflect the tightness of the game.

Bendigo had the favourable end in the opening term and made the most of it, capitalising with three goals to one. It was an arm-wrestle for the most part as both sides had chances to put scoreboard pressure on the opposition. Jack Boyd had a chance with a great contested mark but his shot missed, and then Sam Conforti made Northern pay with a great goal on the run to give the visitors the opening major. The sling-shot approach from defence to attack by the Pioneers in the conditions was working a treat, and Josh Treacy took advantage with a strong mark and converting the set shot for goal number two. James Lucente almost got the Knights on the board with a snap on goal but it bounced into the post. Liam McMahon managed to find the luck with a 50-metre penalty bringing him to the goalsquare to send through Northern’s first goal of the day. He had a chance for a second moments later with a great lead-out mark from the next clearance but the shot fell short and was kept in.

Bendigo rushed it down the other end but Jack Ginnivan also missed after winning a free kick for a high tackle. They peppered the goals with Jeremy Rodi having a chance after a great tackle and free kick, but missed, as did another shot which was just touched by Knights captain Jackson Davies on the line, albeit with an unwanted interaction with the goal post at the same time. Philp was doing his best in close, fending off a couple of players and getting it free forward, but the Bendigo defence, lead by William Wallace and Brady Rowles was sending it down the other end at rapid pace. Their quick ball movement soon paid off as Treacy received a 50-metre penalty and converted to put the Pioneers up by a couple of goals. At quarter time, Philp and Carafa shared in 15 disposals between them, while Ginnivan and Aaron Gundry had six apiece.

Northern took full advantage with the breeze in the second term, booting four goals to one, including the three last goals of the term, to take a narrow four-point lead into the break as the weather deteriorated and spectators began to check weather radars. Much like the first term, Boyd had an early chance, but unlike his first quarter effort, this time he made good on his set shot to cut the deficit to a goal, though the running Ginnivan made sure this was only temporary as he was involved in a number of handballs before putting one through along the ground. The Bendigo defensive pressure continued throughout the term to give the Pioneers chances, but it was the defensive aerial ability of the Pioneers back six that was causing grief for the Knights. Northern continually attacked but each forward 50 entry was picked off by the Pioneers defenders. McMahon broke back with his second goal with a terrific snap from the pocket, negotiating the breeze, then back-to-back set shots after perfect kicks inside 50 handed the Knights the lead. Lucente and McMahon both capitalised on goals and while Ben Worme had a chance to steal the lead back late, missed and the margin was four points at the main break. At half-time it was Philp who led all-comers with 13 touches, while Carafa (11), Gundry and Thomson Dow were not far behind with 11 each. But it was Rowles and Wallace’s impact off half-back and McMahon and Boyd’s work inside 50 that were standing out in the low-scoring contest.

Philp’s work through the midfield was absolutely superb, getting the ball forward early in the premiership quarter, hitting the scoreboard as Northern piled on five goals to three against the breeze. A snap from Lucente was touched as he kicked it for the first score of the game. Wallace and Rowles were combining once again, with Rowles racing it out of defensive 50, taking the game on and getting it long, only for a shot on goal from Ethan Roberts to be touched in the square. Wallace intercepted an end-to-end play from Northern off the behind and established an end-to-end play for the Pioneers as Dow ran onto the ball on the wing and through a series of handballs set up Jack Evans to put it through the middle and give his side the lead. Not to be denied, Philp got on the end of one running inside 50 to put it through and hand his side back the lead, only for Ginnivan to steal it back with a nicely timed goal to stand up as he did in the last term.

But the next 10 minutes of the term belonged to Northern as the Knights booted four goals and blew the margin out to 19 points thanks to majors from Jackson Bowne, Boyd, Koby Davies and Thomas McMahon, all of whom had booted their goals from just about identical spots 30m out from goal off a loose ball get. It rubbed salt into the wounds for the Pioneers, who had been peppering the goals but not quite putting through majors, kicking 2.4 up to that point. The pressure valve was soon given some relief with Gundry marking inside 50 and converting a goal for the visitors just to give them hope heading into the final term, trailing by 13 points. Philp and Carafa were bordering on unstoppable in the midfield, combining for 42 touches, seven more than anyone else on the ground.

The game felt like it was about to break open heading into the last if Northern continued its momentum from the third term, and when Koby Davies snapped truly in the opening few minutes, the home crowd got exactly what it wanted. It opened up the game for Josh D’Intinosante to hit the scoreboard with a set shot to push the margin beyond 20 points, and soon Liam Kolar joined the party with his first goal in Knights colours. The Knights’ lead was 32 points and although the Pioneers never gave in – continuing to get it down the ground with dare and determination, their finishing was letting them down as they kicked two more behinds from genuine chances, to sit at 7.13 to their opponents’ 13.7 with 10 minutes to go really showing the difference in goal efficiency. Ryan Sturgess enjoyed the flow-on effect of the Knights knowing they had the game in the bag, booting two late goals to add to his solid performance across the four quarters. The Knights had run out easy 42-point winners on the back of a five goals to zero final term, but it was not reflective of the Pioneers work for the majority of the game.