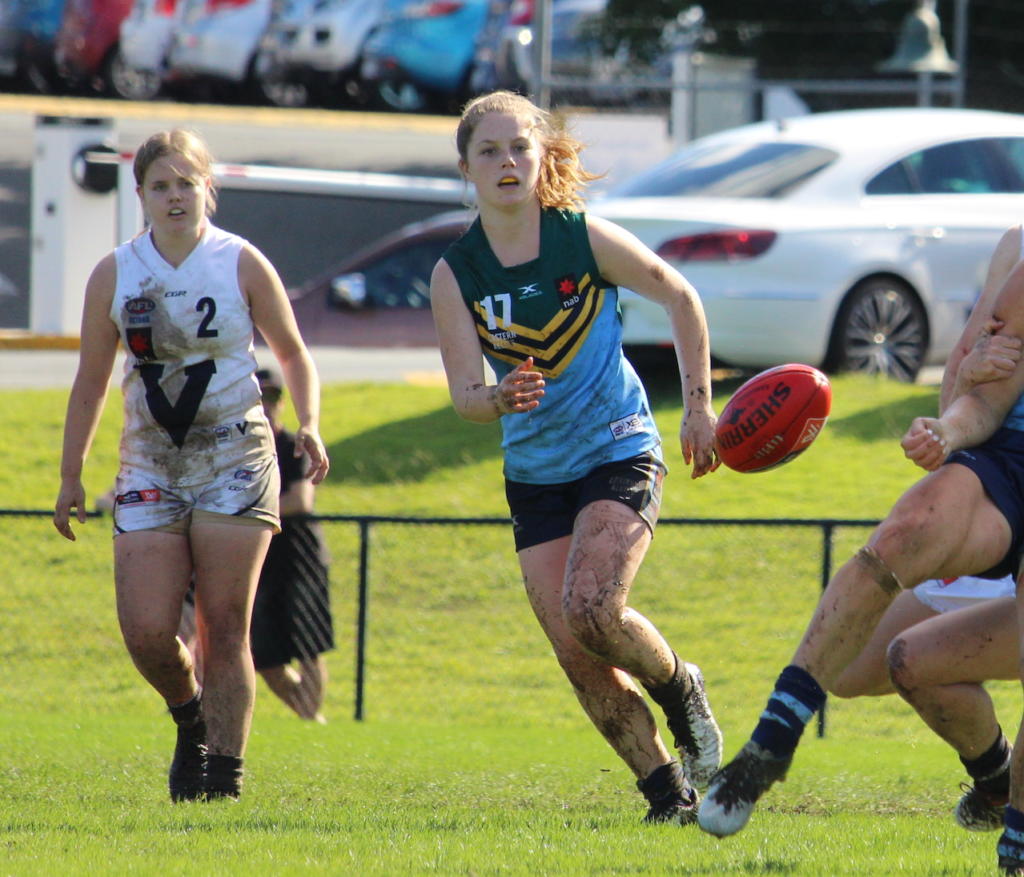 AT only 17-years-old, Lillian Doyle has plenty of talent and passion to boot, playing for Eastern Allies in the AFL Women’s U18 Championships and giving both soccer and rugby a try before making the switch to footy, having always been interested in the sport.

“I was kicking the soccer ball over at the AFL oval across from my home one time and I had one of the AFL coaches come up to me and say ‘oh you have a hectic left foot, do you want to come and play AFL with the boys’,” Doyle said. I’d grown up with a whole bunch of boys so I was a bit of a tomboy myself and I’d always wanted to play footy. “I grew up playing rugby when I was younger but I hit 12 and then I couldn’t play anymore. I was 13 when they (AFL coaches) picked me up actually, and they said I was allowed to play with the boys so obviously I snatched that opportunity up and here I am five years later still playing footy.”

Doyle has a wealth of experience, playing with the SUNS Academy prior to joining Eastern Allies and showcasing her versatility with a willingness to shake up her position on the field when needed, such as being thrown back during the AFLW Under-18 Championships.

“So I actually played with the Suns Academy quite a few years back before I played with the NSW side, and we trained there (at Metricon Stadium) quite a few times and every time we go there it blows me away, it’s just such an amazing field and it’s amazing that they actually allow us to play on it every year,” she said. “I think it’s a really good opportunity to at least showcase to the other girls who are coming into the AFL academies that, you know, this is where you can come to one day and what you might be playing on one day.”

“I’ve been thrown in back quite a few times, I think when coaches have a few they can throw up forward … it’s good to experience something different and just to give it a go, I’m more of a flexible player I suppose in that regard and yeah nah it was awesome I loved it.”

In her second year with the Eastern Allies, Doyle says the standard of the competition has lifted immensely with plenty of talent coming through the ranks and in the coaching staff, ensuring players hit their full potential.

“The development has been great, the amount of talent that I’ve seen come through this system is just remarkable,” Doyle said. “Jess Whelan is one of the youngest and she’s an absolute star, she’s just such a standout and just to see these girls come through and show their talent – I just can’t wait to meet them in the AFLW one day, it’s going to be amazing. “Alicia Eva has been our coach for a couple years, she’s definitely somebody that I idolise, she’s just been an amazing support throughout the years and even having her in this academy – it’s been very rewarding for all of us girls, she’s someone I really look up to.”

While the skill of her teammates has lifted, Doyle’s own strengths have become more apparent too with quick hands and a left foot some of her trademark.

“I think I’m really good at attacking the ball,” she said. “I think one of the things I can showcase is my hands and apart from that probably my left foot, not many girls in the competition have a left foot so that’s something that’s a little bit different and unique. “Probably something I can work on would be my cardio, I think that I’ve got a lot to work on with my sprints and my long distance but I mean there’s always stuff to work on, always things to improve. AFL is a sport where you can always develop and you’ve always got things to work on.”

Her 2018 AFLW Under-18 Championships run saw her put out a match-saving performance against the Central Allies, kicking two final quarter goals to cement victory for Eastern.

“It was unbelievable, that was the peak of my career I believe at that point in time,” Doyle said. “It was amazing and I remember like it was yesterday actually, I can’t believe it’s been a year already but yeah I think I actually snatched one off the ground that bounced back up to me and I got a goal so that was cool.”

While Doyle’s football journey alone has been big, the massive travel time getting to and from training and games is a testament to how important football is for Doyle, proving that love, talent and drive to play the sport is worth every moment of travel.

“So since I’m from Grafton it’s a six hour drive – or one and a half hour flight, so it’s quite a trek to get down to NSW when we do train,” she said. “I actually play for Coolangatta up here (Gold Coast) so I travel up here once a week to train and then back up the highway once again we go on a Saturday to play. So I’m quite used to the travel by now and definitely get sick of it quite fast but it’s something I don’t mind doing because I love footy that much.”

Doyle says the ultimate goal for her football journey is to make AFLW and get to the highest level possible. However she doesn’t want to put too much pressure on herself, maintaining that it was something she came into because it was fun and exciting.