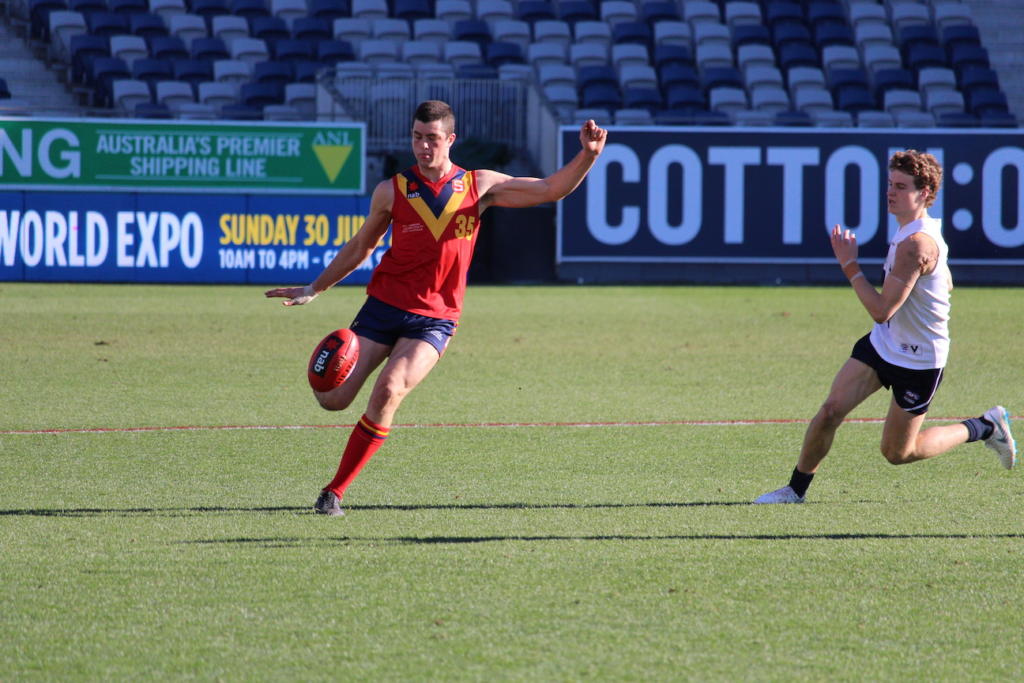 UNDERDOG Prince Alfred College (PAC) exacted revenge for last year’s loss, overcoming Henley High School by eight points in the Open Schools Cup Grand Final on Tuesday night. PAC upped their physicality and pressure game after a scoreless opening term to lead at every other break, chipping away to the 7.7 (49) to 5.11 (41) result.

Henley were dominant early, owning the territory in a scrappy first term but not quite seeing it translate to the scoreboard. State U18 squad member Cooper Horsnell snuck through the opening goal and only major for the first 20 minutes, latching onto the ball at speed close to home and dribbling the tight chance through. With PAC unable to penetrate their forward 50 throughout the term, it seemed they were going to be no match for Henley. That tune quickly changed in the second term as U18 star Kysaiah Pickett snapped home PAC’s first goal just moments after the restart to spark his side, which took the lead via another two majors within 10 minutes. Potential 2020 Adelaide father-son Luke Edwards hit back late in the term for Henley’s sole goal, cutting the margin to a manageable thee points at the main break.

PAC continued to show manic pressure around the ball and terrific intensity in the engine room led by Pickett, hitting a then game-high margin of 11 points in the third quarter after Noah Hannagan had snatched back the lead for Henley. Two sensational goals from Lewis Cowham in the same pocket of the ground ensured Princes remained on top though, providing defining pieces of brilliance inside 50 – the type that wins you grand finals. Trailing by over two goals early in the final term, it was now make or break for Henley, but they couldn’t quite find the big sticks enough from their raft of chances to sneak back in. Lachlan McNeil‘s running goal looked to give them one last sniff, but scoring was hard to come by with every player on the ground flooding Henley’s front half. The result was put beyond reasonable doubt as James Borlase booted home the sealing goal – his second – while Horsnell also added another to pretty up the final score for Henley.

Cowham’s third term burst proved a match-winner for PAC, with Pickett another to provide the same spark when resting forward and U16 pocket rocket Isaiah Dudley outstanding in defence. The combination of Borlase and Luke Pedlar was also handy up forward, while the defensive duo of Hugo Kelly and Jackson Docherty provided a sense of calm in the back half. For Henley, the state squad trio of Edwards, McNeil, and Jackson Mead did most of the grunt work through midfield while adding a touch of class, with the big body of Hannagan suiting the contested game well. Henley’s superior number of State squad members wasn’t enough to drag them over the line though, with the younger and more exuberant Princes side pulling through.

*Note – all players included in scouting notes have represented SA at either U16 or U18 level over the past two years.

The small forward came in and out of the game but made his moments count and was clinical close to goal. He booted the first and only goal of the opening term after sharking the ball off hands at pace, while also claiming the last goal of the game with another opportunistic effort.

Looked ominous early with some strong form in the air, leading his opponent to a bunch of contests and taking a couple of nice grabs. Young had a bit of an ‘almost’ opening term, taking a great sliding mark on the 50m arc and having a quickfire shot smothered, but otherwise getting in the thick of things. He would go on to take another solid one-on-one mark up at half-forward, attacking the ball well on the lead.

Adelaide fans would want to be keeping the potential father-son’s progress on the down-low, but he keeps on showing good signs of form. Edwards’ quick and clean hands in congestion were outstanding, flicking the ball out effectively to his runners and staying strong through the hips as he did so under tackling pressure. He looked at home through the midfield but also chimed in down back with some rebounding kicks and showed good penetration when going long. One to watch for next year.

Was the target of some heavy attention from PAC but still managed to show his class with ball in hand as he moved forward to break the tag. His ability to gather the ball at speed and fire it out quickly was a feature early around half-forward, with his wheeling runs away from congestion later coming into play. One of Mead’s highlights for the night was a lace-out kick to Noah Hannagan on the move in the third term, repeating the feat in the following quarter to find Lachlan McNeil from a stoppage. That left foot is a weapon, and should bring some joy to Port supporters should they pick up the father-son prospect.

Henley’s best player on the night for me, doing all the tough stuff through midfield and proving superior at the stoppages. McNeil’s reading of the taps often got him to the ball first, but he was also quick to hunt it down as it dropped loose and lay a few good tackles. While he missed a couple of earlier shots at goal, McNeil looked to have made amends with a running goal from range in the final term to lift his side. It wasn’t to be, but his contested work and a brave intercept mark in defensive 50 were acts which set the tone as PAC poured on the pressure.

The lively forward wasn’t able to find the goals in this outing, but showed why he was a shoe-in for the state squad with his speed and presence inside 50. While he was a touch fumbly with the ball at ground level, Morris got dangerous positions out the back and used his pace to create separation. He won a free kick as he chase the ball back towards goal one-on-one, but missed the set shot chance. Morris also took a nice mark a full stretch and was unlucky to have an on-target shot touched in a game where it just didn’t quite come together for him.

One of the key reasons for PAC’s turnaround after quarter time, Pickett sparked his side with a classy snap goal to start the second term. His work rate to impact contests at either end from midfield was terrific to see, contributing some flashy touches in congestion and charging away from it with his elite speed and agility. He missed another chance on goal in the second term – this time from a set shot – as well as another snap in the third, but had a profound impact with his deceptive strength around the ball and tone-setting aggression in tackles. Almost provided his usual mark of the year contender with a big leap in the third quarter, but couldn’t quite hold on as he hit the turf.

Was, alongside Pickett, one of the main reasons for PAC’s lift in intensity after quarter time, proving dominant as a small defender. The diminutive U16 star has unreal strength for a player his size, laying touch on his opponents, tackling hard, and getting in the face of just about anyone who dared. His charging runs and roosts from defensive 50 eased a heap of pressure for PAC, getting to the fall of the ball and ensuring there was a way out. Dudley’s work rate to make repeat runs all the way up to half forward also proved handy in breaking a largely contested game open. While he was found out a couple of times when throwing the ball to boot or looking a touch casual late on, Dudley has enormous talent and is already a key part of the PAC side.

Was by no means Finlay’s best game, but the PAC skipper was solid in defence after a slow start. Finlay acted as the defensive sweeper at times, positioning well behind the ball to intercept and pushing it back the other way when in possession. The conditions didn’t aid his usually astute aerial game, but Finlay did well to compete at ground level and provide a cool head in the back half. He was unlucky to give away a free kick against fellow U18 state squad member Josh Morris when chasing him back to goal, making up the difference in pace and not allowing him to get a shot off.

The U16 state representative provided all of the physicality and courage around the ball that he usually would, getting in the thick of the action at the bottom of each pack. Tunkin was aggressive in his attack on the ball, digging in at the stoppages to either lock it in or flick it out to his runners. He made a nice play on the outside too with a pass to assist Lewis Cowham’s third goal in the third term, and can play just about anywhere.

Borlase was terrific in the final term, warming to the contest at just the right time to play a key part in PAC’s win. The key forward led out really strongly and was a reliable target which Princes’ midfielders often looked to with quick kicks, taking the ball well at full flight. He booted two fourth quarter goals; the first coming early after picking off a Henley kick-in, and the second coming from a more conventional leading mark and set shot conversion.

Complimented Borlase well in the forward half, playing a touch more advanced and getting a sniff around the arc. He booted a fantastic set shot from range in the second term as PAC got on a roll, with his routine and kicking from distance a feature. Pedlar was also strong one-on-one and took a couple of nice marks on the move, making him a handful after quarter time.