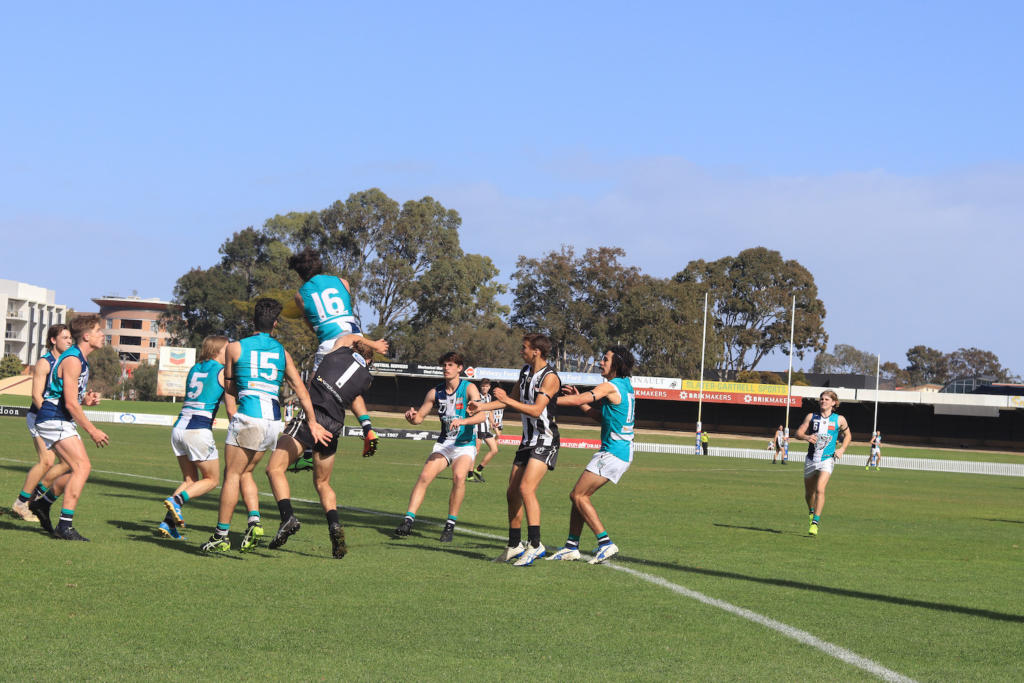 THERE’S two rounds to go in the West Australian Football League (WAFL) Colts and while the minor premiership has been sown up, there is plenty of jostling within the top five. A win or loss in the next fortnight can be all-important in securing a double chance or facing a do or die encounter in the first week of the finals.

Peel Thunder inflicted a psychological blow on one of their premiership rivals as they defeated Swan Districts by 39 points at Steel Blue Oval on Saturday morning.

This game was the only one in the penultimate round that saw two teams in the top five go head-to-head. Swans and Peel had a almighty tussle at the head of the table for the first half of the season. However since Round 10, the teams have gone in opposite directions. Swans have won just one of seven games, while the minor premiers have reversed that with six wins from seven. So this game was a real test for Swans and whether they could find some of their early season form. Jake Pasini and Jax Watson were missing for the home side after earning call-ups to the senior side while Tyrone Thorne was given the same honour for Peel.

The players ran onto to a damp surface after some extremely heavy overnight rain so that added another element to the contest. Peel kicked the first goal of the game through Jackson Knight and that advantage was soon doubled by bottom ager Tyler Nesbitt. Despite some sustained forward line pressure Swans could not put the ball in between the big two sticks and Peel took the ball down and kicked their third through Bradley Oldfield. Swans had two more forward 50 entries for the first quarter but found themselves 17 points behind.

The home team eventually opened their account early in the second quarter through Ashley Brockbernd. However, Peel had all the answers with Jaxon Egan kicking his first on the run from 40 metres. A bad turnover by Swan Districts in defence was penalised in the harshest fashion when 16 year old Zac Trigwell kicked his first. To their credit, Swans managed to keep in touch through a second to Brockbernd. It was level pegging that quarter as Peel kept their 17-point margin for the term. Killian Rawson was the leading disposal gatherer for Peel with 14 to go with five marks, while Brockbernd was Swans’ best with 14 along with five inside 50s.

The question heading into the third term was whether Swans could kick consecutive goals and put Peel under scoreboard pressure. But it was Peel who started the stronger with bottom age talent Connor Heuer winning a free kick for holding the ball and converting from close range. Big man Bailey Kane converted at the other end to keep Swans within touching distance yet again. They then managed to kick consecutive goals with a quick kick from Seb Bright bouncing though an unmanned square. The pressure of the home side was now clearly noticeable as they looked to narrow the gap further. But Peel are top of the ladder for a reason and they responded through the steady figure of Oldfield for his second of the game. They continued to regain control courtesy of a major to Jaxon Pitts and when Oldfield kicked his third they had pushed the lead out to a game high 30 points with one quarter remaining.

Jack Sears then removed any doubt over the final outcome by kicking his first early in the last term and pushing the lead to six goals. Oldfield then put cream of the cake of his best on ground performance by kicking his fourth of the contest. Kade Walldrot put some respectability back on the scoreboard for Swans, however Sears responded in kind for the visitors. The two teams traded goals towards the tail end of the contest and it was the minor premiers who prevailed by a comfortable 39 point margin. Peel edged the overall disposal count (321-319) and had a narrow advantage in inside 50s (45-39). But at the end of the day it was the scoring shots which was the difference with the visitors holding an advantage (21-12).

Star of the day

There were some impressive performers but in terms of pure difference makers it was Bradley Oldfield. One of the more experienced players on the ground, Oldfield often does not often rack up massive numbers, but what he does with his disposals is what counts the most. The 18 year-old showed his poise by amassing 23 disposals, seven marks, six inside 50s and four telling goals. His importance come September is undeniable and other teams will certainly have to shut the midfielder down if they are going to stop Peel walking away with the premiership.

The defensive pillars for Peel were also key to the outcome with Killian Rawson (23 disposals and eight marks) and James Ewing (20 disposals and six marks) keeping their opponents at bay. The foot skills of Rawson running off half back were a particular highlight. Jack Sears was also a lively figure in and around the forward 50 with 16 disposals, six inside 50s and two goals. For the home side, Ashley Brockbernd had 25 disposals, six inside 50s, five marks and two goals while Brenton Hilton worked exceptionally hard down back with 24 disposals and 11 marks.

The fairytale run of East Fremantle was halted by a resilient Perth outfit as the Demons ended their long losing streak by claiming a nine-point victory at Mineral Resources Park on Saturday morning.

In contrast to their opponents who had defeated four finals bound opponents in succession, Perth had won only one of their last eight games. The Demons started on the front foot in this encounter with one of their best quarters of the season kicking six goals to two with Hamish McFarlane scoring two majors. The Sharks responded in the second term with four goals to one and narrowing the gap to seven points at the long break.

The ebbs and flows of the contest was now in full swing as the home side kicked the first three goals of the third to push the lead out to game-high 26 points. However the in-form Sharks responded with relish kicking four goals in a row and cutting the margin to a solitary point with one quarter to go.

The Sharks grabbed their first lead of the game early in the term throughOwen Dunn and regained ascendancy through Trent Rivers. But the Demons had the final say in this excellent clash between two bottom four sides when bottom ager Hamish Dickins and then McFarlane kicked the goals which got them the hard earned four points.

The reigning premiers who have had a disappointing campaign, led for just over ten minutes of the game. Bottom ager Lachlan Henderson was the hero kicking the major which decided the game with only two minutes remaining.

The loss could prove very costly for the Falcons as a victory would have seen them move up to third spot ahead of the dormant East Perth and in box seat for a double chance. But not for the first time, they wasted a opportunity and now need to defeat South Fremantle and depend on their conquerors from this week to do them a favour by knocking off the Royals.

Abraham Clinch led the Lions with 30 disposals, four marks, four tackles and five inside 50s and he was supported by Ben Golding with 22 disposals and 10 tackles. Meanwhile for the Falcons, Callum Johnson and Tyron Hindmarsh each had 31 disposals while ruckman Zak Patterson was colossal with 21 disposals to go with 36 hit-outs and four inside-50s.

Claremont clinched a double chance for the finals after a emphatic 78-point thrashing of wooden spooners South Fremantle at Fremantle Oval on Saturday Morning.

The Tigers set up their big win in the first half kicking six goals to two in the first quarter and extending their advantage to 49 points at the long break. The second half was just an exercise respect for the Bulldogs, while for the Tigers they looked to build their percentage.

The visitors kicked seven goals to two and 12 individual goalkickers for the game told a story about their team-first approach. Claremont only took the in their forward 50 arc 44 times, but their efficiency was first class conjuring up 30 scoring shots. In comparison, the Bulldogs took the ball in 36 times but only had 12 scoring shots.

Jack Cooley was a tireless worker for Claremont with 28 disposals, seven tackles and five inside 50s while Fremantle next generation academy member Joel Western was classy picking up 26 disposals, four inside 50s and a goal. Charlie Malone was a towering presence with four goals to go along with five marks and 17 disposals. Meanwhile for the Bulldogs, Eric Botha tried his heart out with 18 disposals, seven tackles, six marks and four inside 50s while Nathan Spooner did likewise with 18 hit-outs to go with 19 disposals and nine marks.

With the top two locked in the main points of business to be sorted out in round 20 are the third position which will earn a double chance, and who will be in a elimination final. A win by East Perth next Sunday against Subiaco will give them third spot, but any slip-up and West Perth or Swan Districts can make them pay.