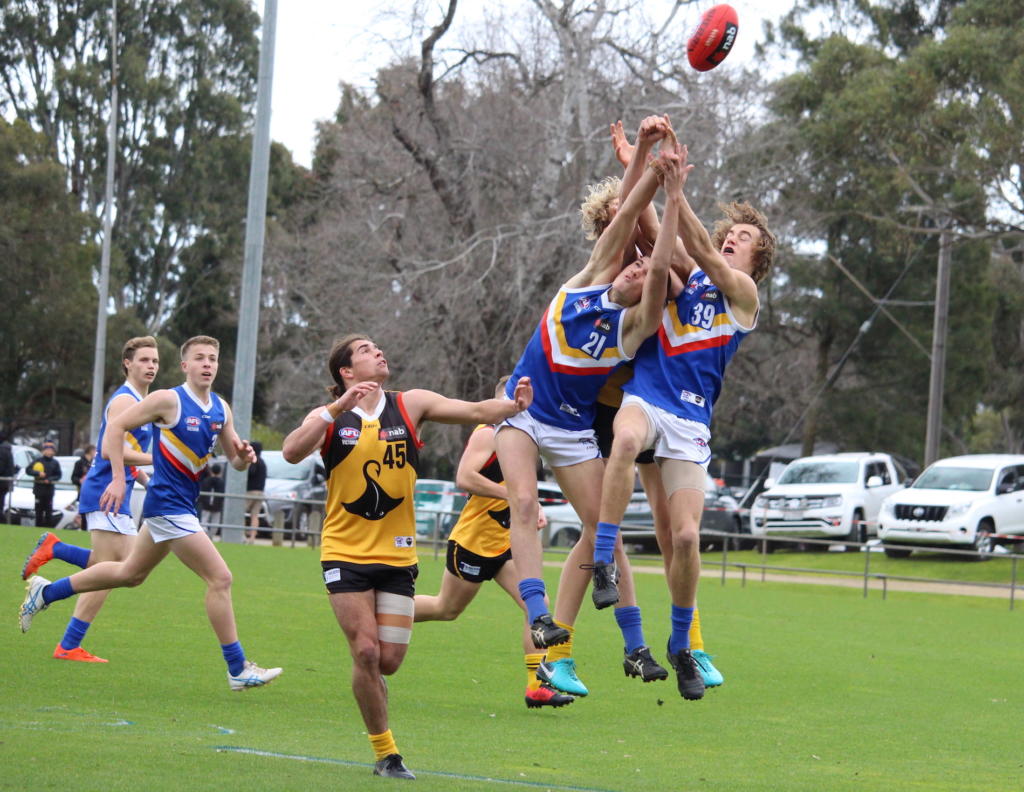 THE big guns are back in action for the final regular season NAB League round, with the safety of third position up for grabs in what is arguably the game of the weekend between Sandringham and Oakleigh. As has become tradition, the six games will be played over two triple-headers, with Saturday’s all-metro games to be played in Werribee, and Sunday’s all-country fixtures in Bendigo.

Both the Western Jets and Northern Knights will be looking to improve their ladder position heading into Wildcard Round as they open Saturday’s Werribee triple-header. The 8-6 Jets come in a game in front of the Knights but hold an inferior percentage, meaning a loss would see the two teams swap spots. Western’s Round 1 win over their weekend opponents is now the only factor separating the sides after 17 rounds, and the Knights will be keen to get one back over their metropolitan counterparts. They’ll have been chomping at the bit during their fortnight off after going down at home to Bendigo, with Western also coming in off a defeat. The Jets will be boosted by the return of Metro representative Darcy Cassar, who slots straight back into the lineup alongside Metro’s U17 Futures squad member, Lucas Failli. Northern has a couple of handy inclusions too, with Adam Carafa and Ewan Macpherson back after undergoing similar duties to Cassar and Failli, but key overage depth in Sunny Brazier and Oscar Simpson goes the other way among eight changes. Both sides have been difficult to predict in recent games but enjoyed solid mid-season runs, but it remains to be seen which of them will bounce back best from a minor skid. Should be a tight one if their previous meeting is anything to go by.

The chance to finish clear on top looms for Eastern Ranges when they clash with the Calder, with the Cannons still able to go level on points with third. The Ranges have shown few weaknesses across their 14 games thus far, losing just three of them and boasting a percentage 14 per cent clear of their next best rival. Despite keeping on track in terms of clinching the minor premiership, Eastern has encountered a couple of scares in recent weeks to go with a loss to Oakleigh, scraping over the line by a collective margin of nine points against Murray and Dandenong. They’ll have to bring their best against Calder, who just keep finding a way to win on their streak of four victories. They have sured up their side for the task too, with a trio of Under 16s making way for PEGS representatives Harrison Jones, Harrison Minton-Connell, and Campbell Edwardes. Eastern’s answer to that is just as promising, with Jamieson Rossiter, Lachie Stapleton, and Connor Downie among six inclusions at the selection table. There should be no excuses from either side as they once again hit full strength, looking to cap off their seasons strongly heading into the business end. Expect Eastern’s consistency and all-round strength to shine through, but don’t be surprised to see Calder run very closely.

The game of the round pits Sandringham against Oakleigh, with both sides looking to claim third spot and earn a week off heading into finals. As if the stakes weren’t high enough, a raft of big names are back after the close of the school football season as both sides have made at least 10 changes each. Seven Vic Metro guns are set to return for the Dragons, with the likes of Louis Butler, Fischer McAsey, Finn Maginness, Hugo Ralphsmith, and Charlie Dean adding so much class to each of Sandringham’s lines. Under 16 Vic Country co-captain Campbell Chesser is set to debut as 23rd man, with U17 Futures representative Archie Perkins also slotting in. If you thought those names were impressive, Oakleigh have done their best to show the Dragons up with Matt Rowell and Noah Anderson returning alongside skippers Dylan Williams and Trent Bianco, bottom-age guns Jamarra Ugle-Hagan, Will Phillips and Finlay Macrae, and exciting ruckman Nick Bryan. 16-year-old Youseph Dib will also feature for his debut, and there would hardly be a better home-and-away game to do it in. With the sides so evenly matched and big names popping up across the field, this should be the highest quality NAB League game since… well, since their Round 3 encounter. The ledger is even at 1-1 after Oakleigh got one back on the Dragons in Round 12, so the grudge match should be a cracker.

Gippsland Power will be looking to lock away second spot when it opens Sunday’s all-country triple-header against Bendigo at Queen Elizabeth Oval. The fixture is a repeat of the Round 3 clash between the two sides, when Gippsland handed the Pioneers their first loss of the season by 24 points. Since then, the two sides have embarked on very different paths; with Gippsland proving to be the standout country side as they sit second with a 10-4 record, while the loss sparked a six-game losing streak for the now 5-9 Pioneers. The Power side, littered with an impressive eight Vic Country representatives, looks superior on paper as the two teams near full strength, highlighted by the need to only make two changes coming into this game. Meanwhile, Bendigo is set to make at least four, with Vic Country midfield ace Thomson Dow a welcome addition to the engine room yearning for a bit of grunt. That area is one the Power will hope to get on top in, as well as up forward as the likes of representative talls Josh Smith and Charlie Comben look to match up on smaller opponents. Count the Pioneers out at your own peril, but expect Gippsland to click into full gear when required.

Two sides with all but confirmed ladder positions in Geelong and Dandenong are set to do battle to close out their regular seasons, looking to end on a high note. While the Falcons are locked into last place, the Stingrays could move up or down one spot from eighth on the back of this weekend’s results. After an undefeated first eight rounds, the reigning premiers find themselves in a far less desirable situation on the back of their mid-late season slump – losing their next seven games. While a fixture against the bottom side which boasts just two wins may seem like a good opportunity to snap that run, a draw in the previous meeting between the two sides will not fill them with much confidence. Needless to say, that game will have the opposite effect on the much-improved Geelong side which has made some handy inclusions. Bottom-age gun Tanner Bruhn heads them, slotting straight back into the lineup after a long-term injury layoff alongside the likes of Gennaro Bove, Noah Gadsby and Charlie Lazzaro. That added midfield depth bodes very well for the Falcons considering Henry Walsh‘s form in the ruck, and given Dandenong’s Hayden Young is spending more time in the midfield. Dandenong’s changes see Cody Weightman and Lachie Williams inject some pace into the lineup, with 16-year-old Connor Macdonald another who could well excite forward of centre. With the Falcons buoyed by a win last time out, they should prove tricky opposition for Dandenong, who themselves will look to break through for a similar victory.

Two bottom-half teams are set to scrap it out to end the regular season, with the GWV Rebels and Murray Bushrangers taking on the honours in Bendigo. The Bushrangers have shown marked improvement in recent weeks after an indifferent start to the season, culminating in a 72-point thrashing of Western Jets last time out as they near full strength. The Rebels have shown similar signs of progression too, picking up three wins in their last four outings after a six-game losing run. Ladder position is a little less relevant in this clash as both sides can only move up or down one spot, with Murray a chance to slot into eight if things go their way, and GWV’s only way up to tenth also dependant on other results. Both sides have sought to add some bottom-age class to their lineups, with GWV adding Nick Stevens and Jack Tillig to the 23, while Murray has brought in Tillig’s Vic Country Under 17 teammate Zavier Maher, with over-ager Ben Kelly another solid option for the key position stakes. While Murray has been a touch more inconsistent, you can often bet on the Rebels being competitive and up for the fight, so this could be a tight one if they bring that intensity.