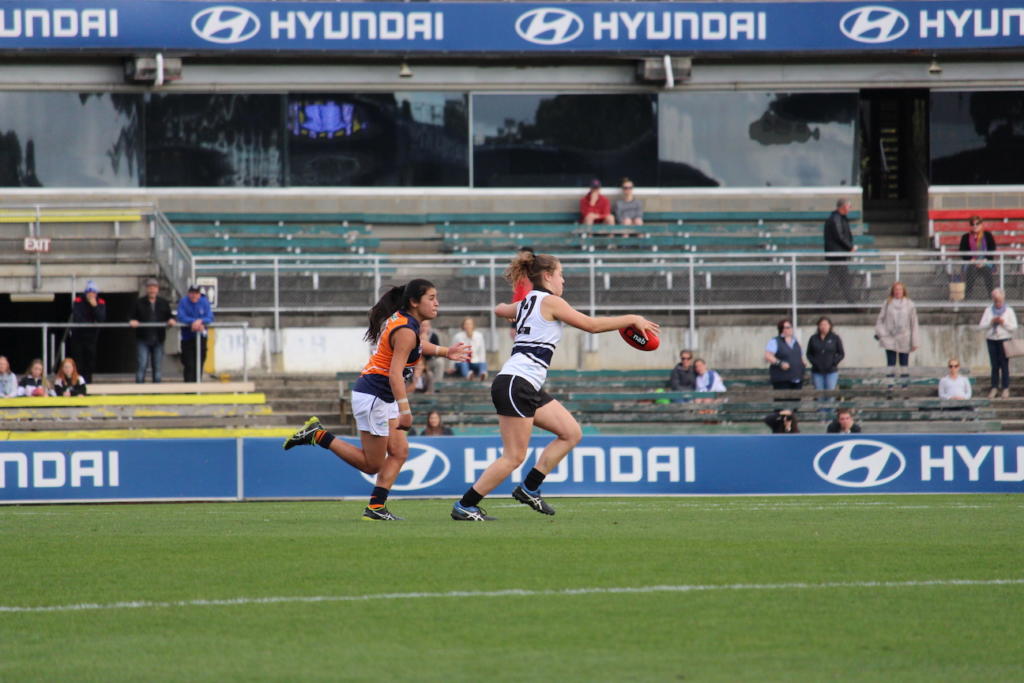 CAST your mind back to April 2018; Round 7 of the them-named TAC Cup, Northern Knights against Bendigo Pioneers, the true arrival of Britney Gutknecht.

Having donned the navy, black and white in every game of her middle-age year to that point, the shrewd small forward booted seven goals in a starring performance as the Knights got up by a whopping 71 points.

Though the feat came as no real shock to those in the know given her talent, Gutknecht was a little more surprised.

“Throughout the game I didn’t even realise I had kicked that many,” Gutknecht said of her outing. “There was a rumour I got six but we found out I got seven and I was like ‘That did not seem like it’, so it was very surprising.”

While most would be satisfied with a seven-goal haul at the elite junior level, the performance would merely prove a stepping stone into the key year in Gutknecht’s footballing journey.

Taking on a leadership role in the young Knights side, the Laurimar product not only looked to make the step up in her off-field appeal, but also had further goals to kick on-field. Speaking at the pre-season NAB League Fitness Testing Day hosted by Rookie Me in March, Gutknecht pointed toward leading “by example” while also hoping to become a more “appealing” player.

“Being a top-ager this year you’ve got a lot of the younger girls who kind of look up to you so it’s good seeing that,” she said. “I suppose you’ve got to show them the right things to do and pull them up if their training standards aren’t up to scratch, stuff like that. “For myself I’m looking at my contested ball and maybe taking the game on a bit on the outside, taking the ball for a few runs… it’ll make me look like a more appealing player, because I can take the game on when I get the opportunity.”

The Northern star lived up to that promise, taking to more permanent move into the midfield after booting four goals against Murray in Round 1, where she would prove tricky at the fall of the ball and opportunistic in general play when getting the ball moving quickly. In a season that saw Gutknecht finish her three years in the Knights program off with a premiership, she averaged 16.6 disposals, 4.7 tackles, 2.8 inside 50s and almost a goal a game.

Second in Northern’s best and fairest, Gutknecht’s NAB League form and thriving performance in a star-studded Vic Metro outfit then saw her become an obvious choice to debut alongside Knights skipper Gabby Newton for Carlton’s VFLW side in July, something which could become a familiar sight given the Blues’ AFLW draft hand.

Making the ‘Big V’ squad was a goal highlighted by Gutknecht in the pre-season and after a fruitful year, her sights will now be firmly fixed on the “massive goal” of getting drafted.