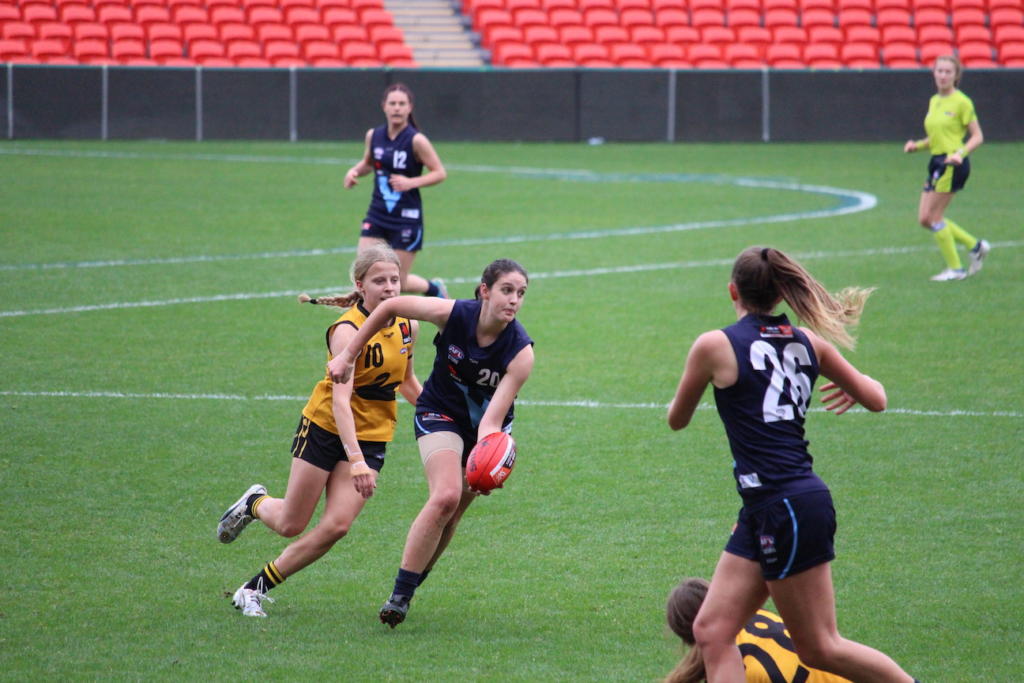 WHILE others travel far and wide, come into the game late, or are poached from other sports, Sarah Sansonetti has enjoyed a much more linear path on her footballing journey.

The Northern Knights key defender traded the monkey bars and slides for a kick of the footy during breaks at school after her dad introduced her to the oblong ball, and has loved the game ever since.

“At school I was getting around out at lunch – instead of being on the playground, I loved getting out and kicking the footy so then dad decided to try at Auskick,” Sansonetti said. “I had a year down there and then went straight into Under 10s at my local club (Bundoora) which was pretty exciting.”

Football proved a “relief” from normal life for Sansonetti, who continues to enjoy the camaraderie that comes with team sports.

“(I like) the community aspect, the way the community gets together and everyone just enjoys it. You get out there, and it’s sort of just a relief from all your schooling and all that,” she said.

The sport that started as a hobby has turned into an opportunity, with the reliable defender fast becoming a leader in her position.

After featuring five times for the Knights as a 16-year-old, Sansonetti backed up the feat by playing every game in 2018, while returning a 10-game season in her top-age season this year.

Sansonetti’s consistency and ability to play a role in the star-studded Northern side meant her name was constantly one of the first on the team sheet, and it is something she highlighted as a key area during pre-season.

“From a team aspect, playing as a team, getting a lot of run from half-back, our forwards playing their role – I think it’s just everyone getting out there and doing their role, that’s sort of what we’re focusing on,” Sansonetti said during the NAB League Fitness Testing Day hosted by Rookie Me in March.

“(Our goal is to) have a consistent year, be consistent week in, week out and I reckon if we do that, we can go one better”

Sansonetti’s “one better” prophecy came to fruition as the Knights claimed premiership glory with a relatively young side after going down in the 2018 decider.

Her role in the undefeated season came two-fold, proving a pillar in the back six while leading Northern’s bottom and middle-agers through all of the rigours of a year at the elite junior level. It was something Sansonetti touched on during pre-season as she outlined her on-field goals.

“I just try to be a role model at training, lifting expectations like lifting the intensity and showing (younger players) what it takes to be in the program because a lot of them haven’t been exposed to it yet,” she said.

With a fruitful NAB League season done and won, Sansonetti was also a key part of Vic Metro’s unbeaten National Championships campaign in Queensland and is in the midst of a solid VFLW campaign with Darebin Falcons.

While Sansonetti said she is looking to push into more “uncomfortable” areas as her journey progresses, winning is a comfortable aspect of the game she seems to bring with her everywhere – with the Falcons getting up in two of her three outings thus far.

It bodes well for a long, consistent career,